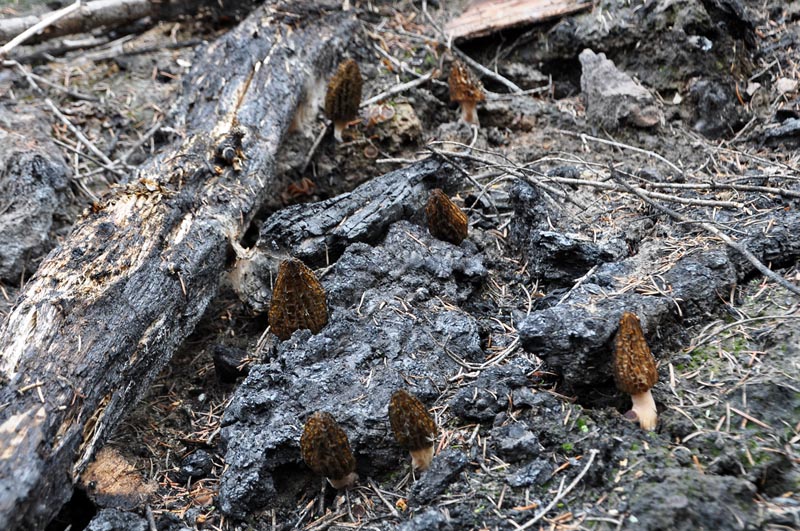 “Burn morels” are particular mushrooms from the genus Morchellaceae, which includes some of the most delectable mushrooms found in North America, prized for their meaty, earthy, or nutty flavors. Unfortunately, the nomenclature and taxonomy of Morchellaceae throughout North America are subject to much discourse among mycologists and leave much to be desired, as these mushrooms have highly variable physical features which makes their accurate identification simply on their morphological features difficult, and sometimes even impossible.[i]

Nonetheless, “burn morels” belong to the elata clade of Morchella mushrooms, which for those of more traditionalist views of mushroom taxonomy correspond more or less to the group of “black morels”. Furthermore, there are certain “unofficial criteria” that mycologists use to define burn morels. These criteria include:

As mentioned above, the taxonomy of morels and their reliable identification based solely on morphologic characteristics out in the field is quite difficult, if not impossible at times. As such, available literature which assesses morels that fruit after wildfires generally does not scientifically distinguish among individual burn morels observed, but rather assumes that they are one of the several putative Morchella species that can be found throughout North America based purely on morphologic features or their color (“blacks” “grays” “blondes”).

Fortunately, in the Taxonomic revision of true morels (Morchella) in Canada and the United States by Kuo and associates, we can come across four Morchella species that meet our aforementioned criteria, chiefly fruiting after forest wildfires, and can be “classified” as burn morels.[ii] 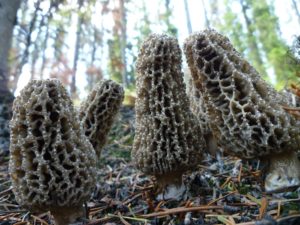 Morchella tomentosa, commonly known as the “gray morel”,  is a unique burn morel that can be found in spring and/or summer following wildfires in high elevation coniferous forests from Northern California to Colorado, and even Alaska. As with other morels, the cap of this species is sponge-like and conical with deep pits and ridges, but perhaps what sets this species apart from the rest are the “fuzzy” fine hairs that can be found along its ridges. These fine hairs make the cap of Morchella tomentosa appear as if it has been dipped in soot, hence the grey coloration. Unfortunately, M. tomentosa does not stay grey for long. As it ages, particularly when exposed the direct sunlight, it dramatically fades becoming light grey, pale tan, or even somewhat yellow in color, making it resemble some of its yellow morel cousins of the Esculenta clade. However, the fine fuzzy hairs remain and can be subjected to potassium hydroxide (KOH; 2%) treatment, which turns them brown and allows their accurate identification under microscopy. Additionally, similar to other edible “true” morels, the stem of this particular species is hollow and fused with a sponge-like cap.

Morchella sextelata is one-half of the “cryptic duo” that includes itself and Morchella septimelata. These two species are morphologically indistinguishable from each other, and the only method of separating these two is time-consuming and costly DNA studies. However, Kuo and colleagues propose a possible but as yet “uncertain” morphologic distinction between these two species. They state that “sterile ridges in the latter species [Morchella septimelata] were primarily subclavate to clavate in the specimens examined, while elements in M. sextelata were cylindrical with a rounded apex, subfusoid, subcapitate or block-like..”, however, the utility of this feature as a tool for differentiating these two species remains to be seen.  As with other burn morels, M. Sextelata can be found in coniferous forests of Western and Northwestern states such as Washington, Idaho, Montana, Wyoming, and Alaska during the spring and/or summer seasons following a forest fire, often diminishing in number with subsequent years. These species are also purported to have “pinkish” pits. Lastly, their stems are also hollow like the other “true” morels and are fused with their caps with a small but noticeable groove.

Morchella septimelata is the second half of the “cryptic duo” mentioned above. Morphologically and ecologically this species is indistinguishable from M. Sextelata. As with all burn morels it too can be found in western and northwestern United States and is also found growing during the spring and/or summer seasons following forest fires in coniferous forests. 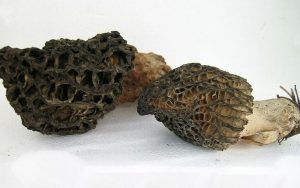 Morchella capitata is yet another similar burn morel that resembles the species mentioned above, but fortunately for mycophiles, it has some morphologic and microscopic features that help set it apart. These features include a layered and chambered stem as well as round bulbous or “capitate” ends present on its sterile ridges when viewed under a microscope. Other than these features, there is not much else that is unique about this particular species. Like the other burn morels, it is also found across much of western and northwestern United States in states like Oregon, Montana, and Alaska. They are found growing in spring and/or summer following coniferous forest fires.

Where To Find Burn Morels?[vii] [viii]

Range: Burn morels can be found throughout much of western and northwestern United States. Particular states include Alaska, the Yukon Territory, Oregon, Colorado, Idaho, Montana, Washington, Wyoming, and Northern California.

Habitat: As we have mentioned burn morels fruit in coniferous and sometimes hardwood forests at elevations ranging from 1000 to 2000 meters during the first one to three spring and summer seasons following forest fires, which produced moderate burning.  They appear above ground near creeks, seeps, and springs when conditions are warm and there is abundant soil moisture, but not so much as to turn the ground “boggy”.

Fruiting Season and Lifespan: Fruiting season occurs from early June to as late as late August, but the most prolific fruiting called “flushing” is usually seen for two to four weeks from late June to mid-July.

Weather: The weather is a highly important factor to consider when hunting for burn morels as it can have significant effects on their fruiting. Adequate to heavy rainfall with overcast days of moderate temperature(60-70° F, with overnight lows of ≥45°F) are ideal temperatures for this group of mushrooms and can prolong their fruiting period and can even trigger additional “flushes”. While hot dry spells can essentially dry these mushrooms right on their stems and excessive rainfall can “rot” them prematurely.

Indicator Species: Some mycological sources seem to suggest that the fruiting or blooming of other plant species can herald the fruiting of burn morels. A report from the United States Department of Agriculture on the Harvesting Morels After Wildfire in Alaska seems to suggest the fruiting of cup-fungus Geopyxis carbonaria, as well as the blooming of bluebells (Hyacinthoides non-scripta) can be used as indicators of imminent morel fruiting. However, these are not “foolproof” indicators.

Identification of burn morels, which are members of Morchellaceae or “true morels” is VERY important as they can easily be confused for Verpas “early morels” or for a few species (Gyromitra esculenta ssp. lato; Gyromitra infula ssp. lato) of Gyromitra “false morels” which are poisonous.

Fortunately differentiating between “true” “early” and “false” is relatively easy.[ix]

One: When in doubt, throw it out!

Four: If it’s reddish, you could be dead-ish!

Personal safety is of paramount importance when foraging for burn morels. Burn morels are often found in deep forests that aren’t near roadways and towns, as such, they should be prepared for the challenges that come with mushroom picking in remote areas. Being aware of unstable tree limbs, ash pits with active embers, slippery soils, and being prepared for wildlife encounters such as bears is also important.

Safety regarding ingesting and being poisoned by false morels or other species is also important. As such it is always recommended to go picking with an experienced mycophile/mycologist and to have an up-to-date mushroom field guide with you; and remember rule one “When in doubt, throw it out!”

Poisoning by Gyromitra species includes symptoms of gastrointestinal upset such as fever, nausea, bloating, diarrhea, and abdominal pain as well as those of nervous system such as headache, lack of neuromuscular coordination, muscle cramps, coma, and even death that appear anywhere from 2 to 24 hours after ingestion. The onset and severity of symptoms depends on the amount/quantity of the mushroom consumed as well as on an individual’s unique physiologic sensitivity.  Although true morels are edible, in susceptible individuals they can produce mild gastrointestinal upset as well as possible allergic reactions. Furthermore, morels should not be consumed with alcohol as this can worsen gastrointestinal upset.

How long does it take for Burn Morels to Appear?

Burn morels usually appear during the spring or summer season that follows a forest fire. They may also continue to “fruit” in the same location during the subsequent next year or two, but usually in much smaller numbers.