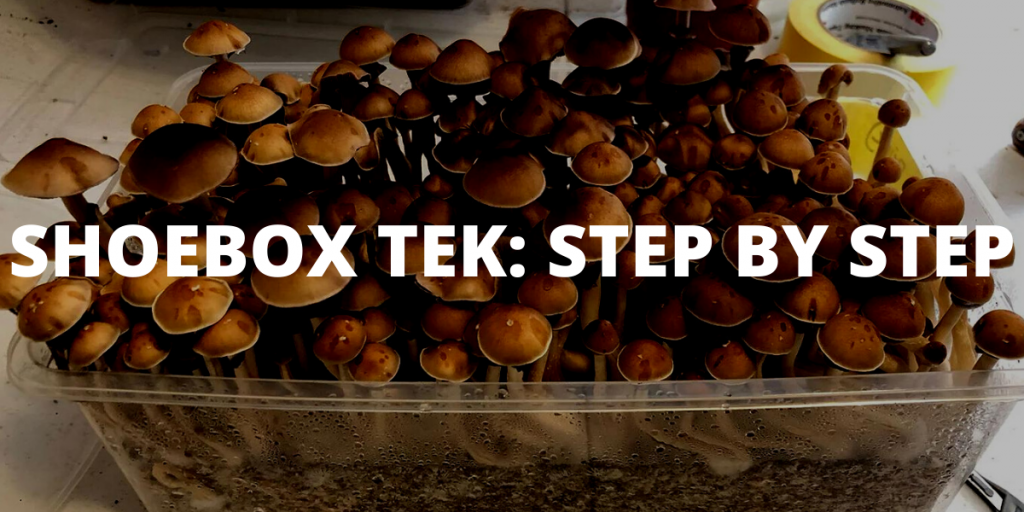 Shoebox tek[i] is another mushroom cultivation technique used to grow magic mushrooms with the use of a growth chamber about the size of a shoebox (roughly six-quart capacity). Almost any monotub or dub tub tek can be adapted to the smaller size, and in fact in our article on dub tub we provided a shoebox-sized example. Here, we’ve got a mini-monotub example for you.

Virtually any mushroom that can be grown in a bulk substrate can be grown in a shoebox-sized tub, although the substrate and the growing conditions will vary with species. Virtually all publicly-available descriptions of mushroom cultivation involve psychoactive mushrooms—mostly one or another strain of Psilocybe cubensis—but you could probably adapt the same method for anything willing to grow on the same substrate.

Why Use Shoebox Tek?

The great advantage of using shoebox-sized tubs is that the mushroom-growing hobby takes up less space. Of course, yields will be less, but since the cost of materials will also be less, the return-on-investment is still very good.

Growers who want a larger crop can always use multiple tiny tubs, losing the advantage of space but gaining the advantage that if something goes wrong with one tub, the others can still fruit successfully—it’s not putting all your mushrooms in one basket, so to speak.

In fact, shoebox teks offer a kind of middle ground between growing cakes and spawning to bulk, with some of the yield size of the latter and the security of the former.

Colonization time varies based on the growing conditions (temperature, humidity etc) but in general Shoebox Tek’s colonize in about 5-10 days. There have even been people who have had their shoebox tek’s take a month to colonize. My advice is don’t panic and be patient, it can take time.

Don’t underestimate the yield of a shoebox tek. Two to three shoeboxes can easily yield as much or more than a monotub. Shoeboxes are also easier to move around, manipulate and experiment with. A typical shoebox yield is about 1 ounce per flush. Each shoebox typically has two flushes, however there have been instances as high as nine flushes, but that would not be the norm. I’d expect at least two flushes and hope for more.

This version is designed to maximize quality and minimize hassle. You may notice that it skips several steps that are important in the dub tub shoebox example we provided. The growers who use it get good results anyway, in part because of critical alterations to other steps.

Note that in this step-by-step, we assume you already have jars of fully-colonized grain. We cover getting to that point in our article on wild bird seed, as well as in other articles.

The following recipe is for five shoeboxes, but you can do more or fewer at a time by adjusting the math.

How to Make a Shoebox Tek

The first thing to do is to hydrate the bulk substrate[ii]—note that this recipe calls for coir only, and for less water than most recipes do. This substrate should be at just under “field capacity.” This deliberate under-hydration helps prevent contamination and directs the mycelium towards the wetter top layer, discouraging fruiting on the sides and bottom of the tub.

Next, clean and fill the boxes[iii].

After harvesting, soak the substrate with enough water to cover for about three hours. Less time won’t let enough water soak in, more time will let in too much water. Then pour off the excess water, put the lids back on, and get ready for the next flush. Each box should be able to do at least two flushes, sometimes more, before yields start to drop off significantly and it becomes economical to start over with new substrate.

If the shoebox tek isnt for you other grow methods like PF Tek, Monotub Tek, WBS Tek, Dub Tub, SGFC or even Mushroom Grow Kits or bags might be more your speed.

1 thought on “The Ultimate Shoebox Tek Guide: Step by step Instructions to a high yield.”