The bottom line:
Not my first choice when it comes to mushroom supplements. I don't think they have any clinical benefits. However; they have a lot of positive reviews which may or may not be legitimate.

Host Defense Mushrooms is a product line of mushroom-based health supplements belonging to Paul Stamets’ company, Fungi Perfecti. According to the brand’s website[i], Host Defense is the best-selling mushroom supplement in the United States and has a commitment to an impressive range of scientific and environmental causes. I have not verified those claims, though I have no specific reason to doubt them. The more important questions are whether the products work, whether they are safe, and—assuming the answers to the first two questions turn out to be yes—are they worth the price?

The Host Defense line is deep and varied, including extracts, powders, coffee and cocoa mixes, capsules, syrups, and sprays. Some products contain material from a single mushroom species, such as lion’s mane or chaga, while others contain multitudes carefully selected to treat a specific kind of health issue (of course the company, lacking FDA approval, cannot openly claim its products “treat” anything, but the implication is understood by consumers). Some products include herbal material as well as mushrooms. All products are sourced in the United States and are certified organic and non-GMO, and the mushroom material is produced on the brand’s own farm. It’s easy to find glowing reviews online, both of individual products and of the brand as a whole.

Of course, the popularity of a product is not, all by itself, solid evidence of its quality. Paul Stamets, the founder of the brand, is excellent at self-promotion—not a bad thing, by any means, but it is an important piece of context to keep in mind when looking at the brand’s reputation. 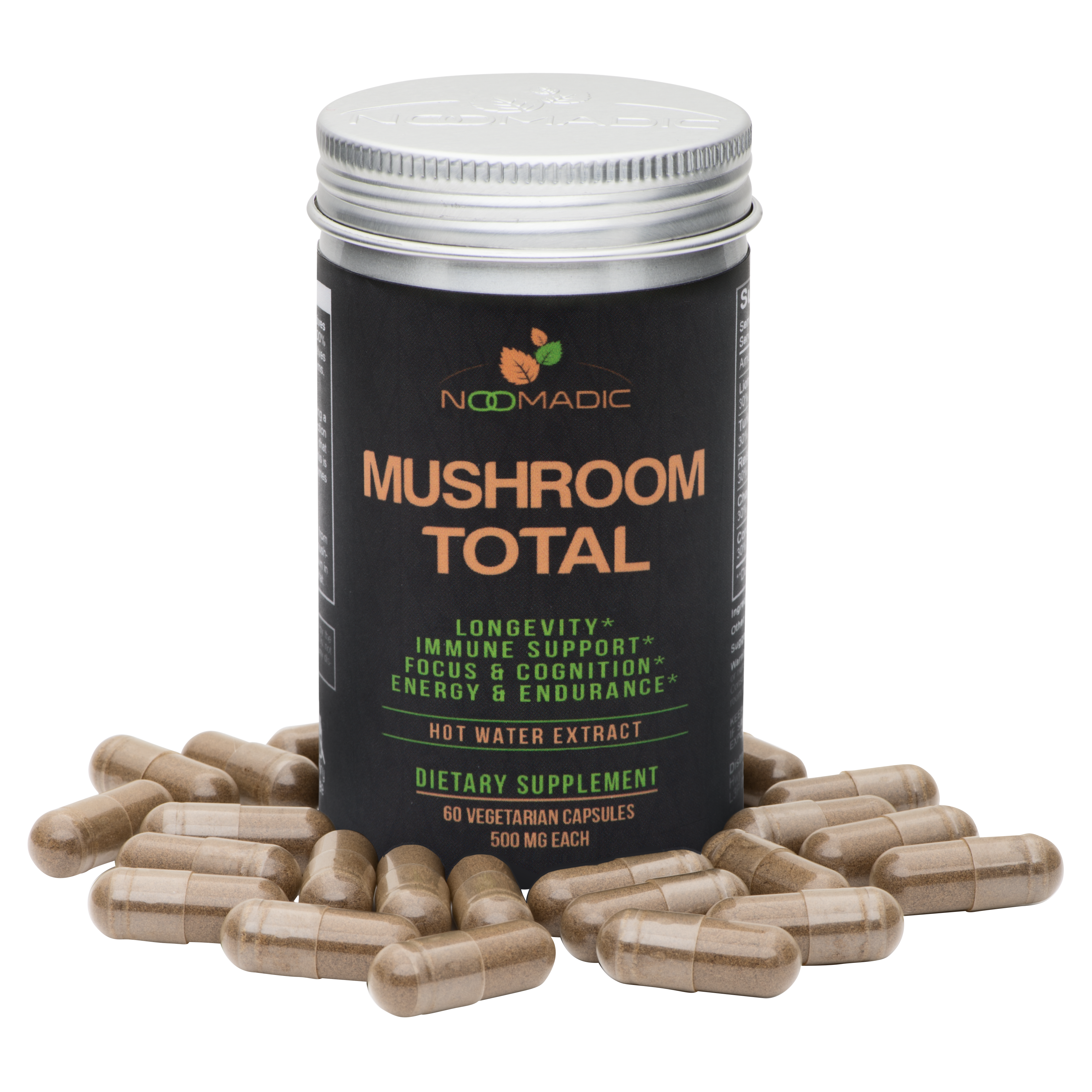 We typically review products based on four characteristics: efficacy; safety; trust; and value. These characteristics are interwoven, however, since, for example, a product that does not work cannot have good value.

The most important question for any medicinal product is “does it work?” Unfortunately, when it comes to mushroom-based supplements, the answer is never a resounding yes because these kinds of products have not been through the kind of rigorous testing required for FDA approval. The medicinal use of mushrooms is based, in most cases, on a combination of traditional folk medicine usage and preliminary scientific testing using cell cultures or animals. Many traditional treatments do work, and promise indicated by early testing is often born out, but there are also cases where folk medicine and preliminary science have gotten it wrong.

So when is comes to medicinal mushrooms, the answer to “does it work?” is generally “maybe.”

I have some concern that in the case of Host Defense, the answer could be “maybe not.”

Host Defense products are all made of either a combination of mycelium and fruiting body or mycelium alone—and with some possible exceptions (notably lion’s mane), mycelium is not thought to be medicinal. It doesn’t contain much of the substances thought to be providing medicinal benefit. Also, it’s impossible to separate mycelium from its substrate, so that mycelium-based products contain large amounts of non-medicinal grain.

Curiously, the Host Defense website claims the opposite, proudly referring to independent research showing that mycelium is actually more efficacious than mushroom fruiting bodies—but the website does not cite that research. I myself have not seen any research to suggest that mycelium is categorically better than fruiting body, for any species but lion’s mane, and even there the evidence is preliminary. While I am unwilling to say such research has not been conducted (it’s possible I’ve overlooked something in the literature), I do have my doubts about these products.

Host Defense could resolve the issue by providing information on the biochemical content of its products, not simply the products’ ingredients. For example, the brand could guarantee a minimum per-dose beta-glucan content. We have, so far, found no such guarantee.

TLDR: Host Defense’s efficacy is my biggest concern. There is no evidence to suggest mycelium based mushrooms have any clinical benefits. On the contrary there is some clinical evidence that suggests mushroom extracts made of fruiting bodies and measured by beta-d-glucan do have some clinical benefits. In fact they sell other questionable mushroom products like tinctures. Host Defense does not sell any mushrooms measured by Beta-D-Glucans, which is a huge red flag to me. I simply don’t believe their mushrooms work. See the recommend alternative below to buy something I actually believe works.

Host Defense Mushrooms is a well-regarded brand with over ten years on the market and consistently good product reviews—the fact that there are a few bad reviews is actually a good sign, as it shows bad reviews are not being removed. The public does, indeed, seem to trust the company.

Personally I do not think such trust is earned. Certainly the fact that there are a lot of anecdotal reports of the products working is irrelevant to the question of efficacy; scientific study and statistical analysis were invented precisely because anecdote and personal experience aren’t reliable with this sort of thing. That human beings can end up being very wrong about things by trusting their own experience and the testimonials of others is a known bug in our species’ program, so to speak. Another thing to consider is big dollar companies like this are notorious for manipulating reviews by simply not publishing negative ones or even buying positive ones.

Then there is the issue that Paul Stamets himself is a mycologist who is deeply respected by those who know little about mycology. He certainly deserves credit for showing a lot of people that fungi are awesome, and his championing of fungi in food, medicine, and environmental conservation is certainly admirable, but experienced mycophiles and mycologists tend not to think much of his work. That fact attaches a caveat to everything that he sells, including mushroom-based supplements.

Paul Stamets has also boldly claimed that Turkey Tail “cured his mom of cancer” and while that’s certainly possible there are no long term clinical trials that suggest this. I personally don’t have a problem with people looking for additional ways to help them in their cancer fight but I believe if you’re going to make a statement like that you should have definitive evidence. At the very least you should suggest that Turkey Tail could be a beneficial supplement against cancer, but to check with your oncologist. It’s the definitiveness he says it with that rubs me the wrong way. I feel that this can lead some people to make a life changing decision that might not be the right fit for them.

I am aware of no reason to distrust Host Defense, and I note the long-term popularity of the brand, but I do advise caution.

Host Defense products do seem to be safe, in general. I am aware of no reports of mislabeling (which can be a serious problem with some mushroom products, where testing reveals the product contains the wrong species). And most of the mushroom species the brand works with are known to be safe to take for at least short periods without serious side-effects. But there are some important caveats.

First, some medicinal mushrooms do have possible interactions with other medications, and some should not be taken before surgery. Long-term use, or use by pregnant or nursing women, has generally not been studied. It’s important to learn about these remedies from unbiased sources (that is, not from the company’s own sales information) before taking them. If possible, consult a qualified healthcare practitioner.

Second, some people have allergies or sensitivities such that what is safe for most people is not safe for you.

Third, Host Defense does carry reishi products, and there is some indication that reishi could cause serious problems if taken long-term.

Fourth, it’s important to never use medicinal mushrooms instead of mainstream medicine.

But all these caveats would be true for any mushroom products brand. I am aware of no specific concerns regarding Host Defense.

Value can’t be considered independent of questions of efficacy, safety, and trust. Clearly, Host Defense products are priced to sell as evidenced by the fact that they do sell; the brand does very well. From a strict perspective of consumer demand, the products seem to be well-priced. But they are not cheap. Some products may run to a few dollars a day, and they are supposed to be used long-term. Users can take advantage of sales, though, to bring down costs.

If these products work, if they can effectively treat medical problems that would otherwise require much more expensive remedies if they could be treated at all, then they are worth the price.

If they don’t work, they are not worth any price.

Are these Magic Mushrooms?

No. These are medicinal mushrooms which are generally used as a natural way to combat some health conditions. Lions Mane for example is a mushroom that helps with cognitive enhancement, while others are used for their immune boosting properties.