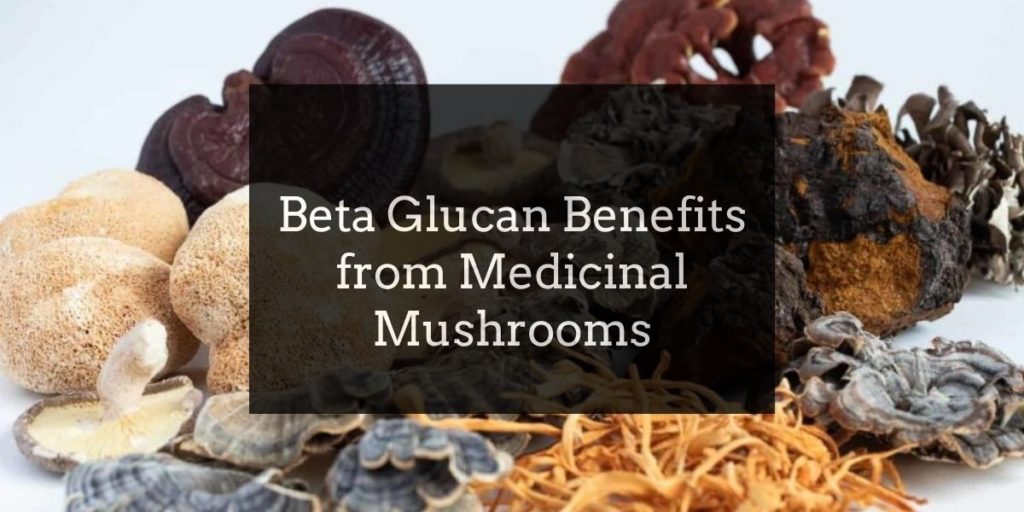 A polysaccharide[ii] is a long string of sugar molecules—the string as a whole is a fiber, either insoluble or soluble (actually more like semi-soluble) in water. Depending on the details of its chemical structure, a polysaccharide can serve any of a group of functions, including intercellular communication, energy storage, and support for the physical structure of the organism. Familiar polysaccharides include starches, glycogen, chitin, and cellulose.

Here is a better explanation of Polysaccharides vs Beta Glucans.

Beta glucans are not all alike. They don’t all provide exactly the same benefits—however, they are closely related to each other, so it’s possible to make generalized statements about them and what they do[iii]. Many edible mushrooms contain beta glucans, as do certain yeasts and both oats and barley. Mushroom beta glucans have only recently begun to be seriously researched, so there is a lot that still is not known about them.

How do Beta Glucans Work?

How do beta glucans work? The question does not yet have a complete answer, especially since it isn’t yet known that they do work for all the things they are claimed to do. Much of the available research is still preliminary. That being said, a big part of the picture is that beta glucans are not digestible[iv].

Beta glucans are soluble fibers, meaning they partially dissolve in water. Yet they do not completely dissolve, and the human digestive system has no way to disassemble them into their component molecules. They cannot be absorbed. While traveling through the human digestive tract not being digested, beta glucans slow the digestion process, preventing spikes in blood sugar, and reducing the absorption of dietary cholesterol (not all cholesterol is dietary; the human body can make its own).

There are many health benefits claimed for beta glucans[v], mostly based on preliminary and sometimes conflicting evidence. The one benefit that is fairly well established is heart health. A diet rich in beta glucans lowers a person’s risk for heart disease. Almost as reliable is their reputed ability to lower cholesterol; some studies show the benefit, others do not, possibly because of differences in how the beta glucans used in the treatment were processed.

There is also some good preliminary evidence for several other benefits. Beta glucans may be able to reduce symptoms of hay fever. Intravenous injections of certain beta glucans (but not others) seem possibly useful for extending life for women with advanced cervical cancer and for reducing the risk of serious infection after surgery or trauma.

There are also many conditions for which research suggests beta glucans might be of some use, although the jury is definitely still out. These include type 2 diabetes (but not type 1), high blood pressure, irritable bowel syndrome or IBS, certain cancers, certain infections in the airway, eczema, canker sores, obesity, and pain after surgery.

The common elements for many of these benefits appear to be blood sugar control, cholesterol reductions, immune modulation, and anti-inflammatory effects.

The lack of clarity in the research may be the result of subtleties in how beta glucans work that are not yet understood. For example, studies with different results could have used different beta glucans, or variation in the details of processing or administration could be having a big impact on the results.

The most important benefits of Beta Glucans, seem to be that they are just good for general health and well being, almost like a multi-vitamin.

The best Mushrooms to take for beta glucans are Maitake, Shiitake, Lions Mane and Reishi.

Most (not all) of the medicinal benefits attributed to mushrooms are the result of their beta glucans. That is one reason why the same list of uses, with slight variation, appears again and again among mushrooms: immune modulation, anti-inflammatory effects, blood sugar control, cholesterol reduction, and cancer treatment. Mushrooms, particularly those with a reputation for medicinal properties, are rich sources of beta glucans.

However, that does not mean that eating a lot of mushrooms is simply “a cure for what ails ya.”

The Limitations of the Research

Virtually all of the studies done on the medicinal value of beta glucans have used concentrated extracts or isolated beta glucans. Such methodologies allow researchers to focus in on the properties of the beta glucans themselves, without risking confusion from other substances that may have their own health impacts—however, that also means that basic questions, such as “if I eat a lot of shitake mushrooms, will my diabetes get better?” haven’t been addressed.

Also, there are many different beta glucans and many possible ways of preparing and administering them. Only a few possibilities have ever been tested and only on a handful of all the possible medical problems these substances could possibly address. We have more questions than answers.

Making sense of the limited and conflicting information we have is a job for an expert. Those who are sick and wish to try mushroom-derived beta glucans should either consult an expert or become one.

Beta glucans generally stimulate the immune system, so they may not be a good choice for people taking immunosuppressant drugs.  Also, while the amount of beta glucans present in food appears entirely safe—a person can eat as much of the beta glucan-rich foods as they want—concentrated extracts could be a different story, and the safety of their long-term use has not yet been well researched.

People who are pregnant or otherwise medically vulnerable should take note that beta glucan supplements are unknown territory.

There are a lot of beta glucan supplements on the market (they may or may not be mushroom-derived), as well as mushroom extracts that owe much of their effectiveness to their beta glucan content. Unfortunately, these products are not regulated, so quality is very far from assured. It is up to consumers to do their own research.

One approach is to speak with experienced medical practitioners and ask for recommended brands. Another approach is to research the product directly. One of the most important things to look for is a statement of guaranteed beta glucan content (not polysaccharide content, since there are polysaccharides that are not beta glucans). Companies that cannot say exactly how much beta glucan their product has might not actually provide any.

It’s also important to learn enough about biochemistry to recognize nonsense. A favorite tactic of unscrupulous companies is to couch their product claims in language that sounds good, but actually mean nothing—and any company willing to mislead consumers to any degree is likely not to have a safe and effective product. Achieving scientific literacy is an excellent way to separate the charlatans from the reliable providers. This is my choice for a trustworthy company selling a Beta Glucan Supplement.