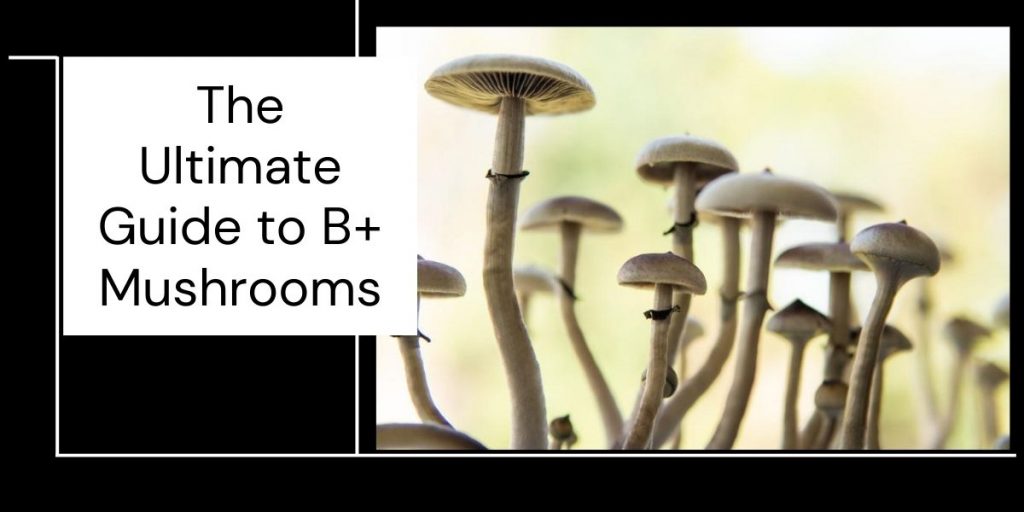 B+ is a strain of Psilocybe cubensis, a well-known hallucinogenic mushroom species[i]. The B+ strain is popular with growers because it is easy to work with, accepting a very wide range of growing conditions and substrates and producing large, thick caps. Though not the fastest-grower among P. cubensis strains, B+ is not the slowest, either. Color can vary a little, depending on growing conditions; enthusiasts describe the large golden to caramel-color caps as “beautiful.”

It can be difficult to learn much about P. cubensis[ii] besides its use as a “magic” mushroom, since many writers focus on that one point to the exclusion of all else. Yet even if a person’s primary interest is the “magic,” learning about the mushroom provides necessary context.

P.cubensis is one of a number of closely-related psychoactive species, though it is the most well-known (there are also other psychoactive mushrooms that are not closely related to P. cubensis and have somewhat different effects). The substances responsible for the psychoactive effects are psilocybin, psilocin, baeocystin, and norbaeocystin. The concentration of these substances can vary significantly from one individual mushroom to another.

Although P. cubensis is not generally considered toxic (but see note under Cautions!) it closely resembles a number of other species, including the aptly-named Deadly Galerina. Growing “magic mushrooms” at home is substantially safer than harvesting them wild, and multiple cultivated varieties, including B+, exist, often with creative, funny names.

Cap: Curved to flat on top, usually smooth. Variable in color, but generally light brown with a dark center. The interior flesh is white but bruises blue.
Gills: Initially gray, darkening to purple and then black, but usually with pale edges. Very young specimens still have a veil covering the gills.
Stem: Often very long. Whitish, but bruises blue. After the veil rips as the cap expands, veil remnants remain in a ring of tissue around the stem, like a skirt. Though the ring is actually white, once the purple spores are released some of them land on the ring and turn it purple.
Spore Color: Purple.
Habitat: In the wild, P. cubensis feeds on and fruits from cattle dung. It is distributed over much of the world, in part because it follows cattle; cattle egrets, birds that specialize in hunting insects near cattle, carry the spores to new pastures.

There are several different ways to grow B+ mushrooms. The simplest, especially for beginners, is to use a commercially available, already-inoculated grow kit[iii]. More advanced growers have plenty of other options, though. There are grow kits that are not yet inoculated with mycelium (bottles of liquid culture come with the kit or can be ordered separately). Or it’s possible to start from scratch, mixing and sterilizing the substrate at home and inoculating it with culture grown from spores[iv]. Starting from scratch does require a bit more know-how, but it yields more consistent results.

Please note, however, that in many jurisdictions growing psychoactive mushrooms is illegal, though possessing the spores or liquid culture usually isn’t. That means suppliers are not breaking the law to sell spores or culture or un-inoculated substrate or other supplies—but putting these items together and growing mushrooms may be a very serious crime. Again, it’s important for new, would-be growers to learn about current law in their area, to avoid breaking the law by accident. Regardless of the law, this doesn’t stop people from microdosing mushrooms.

Whether using a kit or starting from scratch, a grower is going to have to source supplies from somewhere. It’s important to keep in mind that not all suppliers are equal and not all are even remotely adequate—the industry is completely unregulated. It’s not uncommon for kits to arrive contaminated or  for bottles of culture to contain spores from the wrong strain or even the wrong species. Some would-be growers have bought bottles that turned out to contain nothing but water.

It’s important for growers to thoroughly research suppliers before ordering. Joining a community of growers and learning as much as possible about mushroom growing will help, both with knowing what questions to ask while vetting a grower and with knowing which companies have a good reputation.

There are a number of different ways to grow P. cubensis, and indeed one of the advantages of the B+ strain is that it will grow on almost any substrate and is very forgiving of beginner mistakes. Rice flour with vermiculite is a very popular substrate, as are rice or coir, but manure works, too, as do a few other options (See: The Ultimate Guide to Mushroom Substrates). The entire process takes about two months from inoculation to harvest.

A grower will, of course, need detailed instructions, but here is an overview:

It’s important to keep temperature and humidity exactly where they should be (See: The Best Humidifiers for Growing Mushrooms). The growing fungi do need air to breathe, but light is less important. They should not be kept in the dark (without light, they won’t know where the outside of the substrate is when it’s time to form mushrooms), but they do not need light the way plants do. The same blocks of colonized substrate can go through multiple fruiting cycles.

It’s best to harvest the mushrooms before they reach full maturity while the gills are still covered by a veil. However, growers wishing to make their own liquid culture will want to let one or more mushrooms mature fully so it can start producing spores.

Fresh mushrooms do not last very long, but someone growing for their own use is not going to go through an entire flush quickly. Fortunately, P. cubensis both dries and freezes well. Complete drying requires a food dehydrator (See: The Best Food Dehydrator for Mushrooms).  Air-drying on a counter-top will extend the mushrooms’ shelf-life, but for a much shorter length of time.

Using any P. cubensis mushroom is illegal in many jurisdictions, though there are complications and exceptions, and laws do change over time. While this article cannot recommend that anyone break the law, obviously many mushroom enthusiasts do so. It is important to find out what the current law actually is for one’s own jurisdiction before even considering exploring mushroom magic. It would not do to get in serious legal trouble by accident.

In general, psilocybin-containing mushrooms alter both perception and mood, and not always in an enjoyable way[v]. Users may feel either euphoric or terrified. Hallucinations (which can be anywhere from subtle to extreme) may be beautiful or disturbing. There may be a sense of unreality. A lot of people have profound spiritual experiences on mushrooms. Exactly what a given mushroom experience will bring depends on the species and variety of mushroom, the dose, and the mental state of the user. There are ways to maximize the chance of having a good experience.

Aside from the psychoactive effects, there is some evidence that these mushrooms may be useful for treating a number of medical conditions, including severe headaches and depression.

The B+ strain specifically has a reputation for being very visual, “warm,” and spiritual. While not risk-free, it’s considered a good strain for beginners.

We don’t have a recommended specific dosage but if you want to try and find a dose that works for you, check out our general magic mushroom dosage guide. You can also try out our magic mushroom dosage calculator where you can choose between six dosage levels, including microdose and heroic dose.

Popular methods of consumption for B+ Shrooms may include Lemon Tek and Shroom Tea.

P.cubensis is relatively safe to use. Most people who seek help do so because of short-term problems associated with a “bad trip,” not because of any kind of toxicity[vi]. And yet there are several important cautions to keep in mind when using B+, or any other P. cubensis strain.

Don’t put too much faith in dosing guides. It’s easy to find recommended doses online, usually expressed as a certain number of grams of dried whole mushroom. Such guides may be accurate for the majority of users and the majority of mushrooms. However, sensitivity to the psychoactive substances in “magic” mushrooms varies from person to person, so one user’s minimum dose may be way too much for someone else. Also, the concentration of these substances varies dramatically from mushroom to mushroom, even within the same strain, meaning even an experienced user could have a bad experience with an unexpectedly powerful mushroom. Most users figure out what works for them most of the time, but it’s not a fool-proofyi proposition[vii].

Don’t over-estimate the psychological risks—but don’t underestimate them, either. “Magic mushrooms” have a reputation (mostly among people who have never used them) for being psychologically dangerous, able to cause psychotic episodes and other problems. These risks are often over-stated; people who have personal experience with the mushrooms report that such horror stories are extremely rare. However, negative effects are possible. Persons with a family history of schizophrenia, or other risk factors for psychosis, should not take psychoactive mushrooms.

Don’t gather wild Psilocybe mushrooms. Persons who are not actually experts at mushroom identification should not harvest wild “magic mushrooms,” since one of their look-alikes is toxic and can kill those who eat it.

5 thoughts on “The Ultimate Guide to Psilocybe Cubensis B+ Mushrooms”