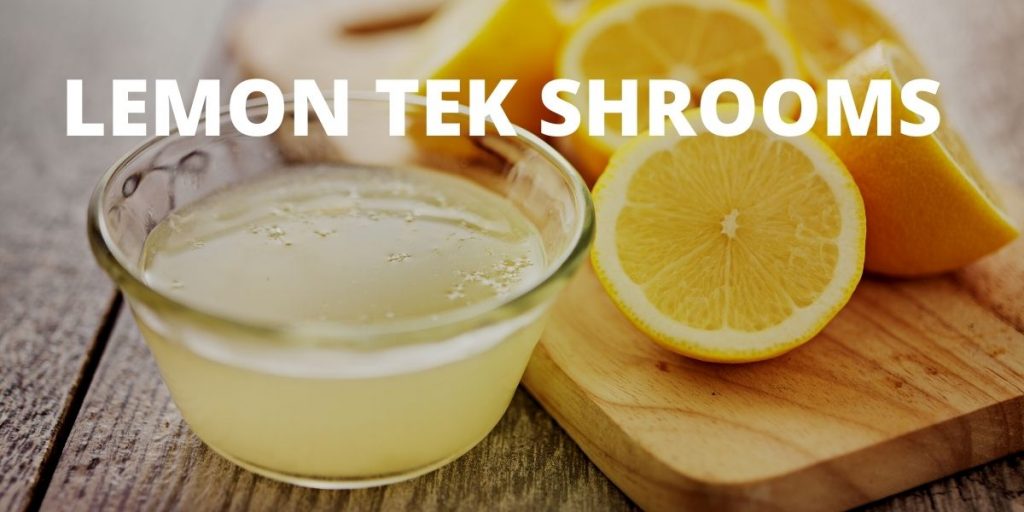 Lemon Tek [i] (short for “lemon technique”) refers to the practice of soaking psychoactive mushroom powder in lemon juice before drinking the mixture. People who do it report less nausea and a faster, shorter, more intense trip. The lemon juice also helps disguise the flavor of the mushroom, a flavor that many people dislike. The lemon mixture can either be taken in one gulp as a shot or mixed in with ginger tea.

Lemon Tek is widely regarded as one of the best ways to take shrooms.

Want to know more? Read on.

How Does It Work?

How does lemon tek work? The short answer is nobody knows for sure. There are two reasonable-sounding guesses, and either or both could be true, but there has been no scientific research on the matter yet.

Both possibilities revolve around the fact that lemon juice is about the same acidity as the human stomach—lemon has a pH of 2 to 2.5, while stomach acid has a pH of 1.5 to 3.5 (pH is a measure of how alkaline a solution is. Since an extremely un-alkaline substance is, by definition, an acid, the lower the pH number, the more acidic something is). So, soaking something in lemon juice should be a little like digesting it, right?

So one guess about how lemon tek works is that the acid pre-digests the mushroom, breaking down the mushroom’s cell walls and making more of the mushroom available for digestion. Mushroom cell walls are made of chitin, a substance humans can’t digest, which is one reason raw mushrooms make a lot of people ill. Normally the solution is to cook the mushroom, since heat melts chitin. Unfortunately, heat also destroys psilocybin, so that’s out. Lemon juice may be a psilocybin-safe alternative (although if acid alone can break down chitin, why can’t we, with our naturally-acidic stomachs, digest it?).

Another possibility is that the lemon juice converts psilocybin to psilocin. Although we, like many other writers, normally refer to psilocybin as a psychoactive substance, that’s not exactly true. What is true is that when we consume psilocybin, our bodies convert it to psilocin, which is psychoactive. But the conversion process takes time—if lemon tek does some of the conversion ahead of time, then that would explain the effects coming on sooner.

But, again, neither possibility has been tested. Anybody who claims to be certain about any aspect of what lemon tek does is overstating the case.

Acidity does seem to be the key, though. Other fruit juices that don’t have the same low pH don’t work, or don’t work as well, but some people report good results with balsamic vinegar.

Note that drinking lemonade, or some other tart thing, after consuming mushrooms, probably does nothing except taste yummy. The stomach is already acidic—it does not need to be made more acidic, and shouldn’t be (that would hurt). Anyway, since human stomach acid is often more acidic than lemon juice, even if you drank straight lemon juice (let alone the even less-acidic lemonade), you’d decrease the acidity of your stomach rather than increasing it.

How Fast Does Lemon Tek Kick In?

A lemon tek trip can start in as little as ten minutes after ingestion, though up to 45 minutes is still normal. Compare that with a plain mushroom trip, which takes anywhere from half an hour to an hour and a half to kick in! The peak will come sooner, too.

How Long Does a Lemon Tek Trip Last?

Trip duration depends on dose, the strain or species of mushroom, and probably also the user’s biochemistry. That being said, six to eight hours is pretty typical for a plain mushroom trip—everything else being equal, lemon tek makes that four to six hours instead. Some users also report that with lemon tek the effects are more continuous, instead of coming in waves.

Yes, many users claim lemon tek reduces nausea, but it’s hard to be sure without a clinical study, since even plain mushrooms don’t cause nausea all the time to everybody. Mixing the lemon mixture into ginger tea could help, as ginger is a home remedy for nausea.

So, how do you lemon tek?

1) Grind the dried mushroom (These are our favorite mushroom grinders).

3) Get the juice of one or two lemons or limes (or equivalent sour liquid).

4) Mix the powdered dose into the juice and let stand for fifteen or twenty minutes.

5) Straining out the larger bits of mushroom after the soaking period is optional, and said by some to alter the quality of the trip in some way, as well as further reduce nausea.

6) Either take the lemon mixture in one gulp, like a shot (it may burn going down) or mix it with your favorite tea, then drink.

Most writers recommend using a smaller dose with lemon tek than when taking mushrooms plain, because lemon tek makes the trip more intense. Generally, inexperienced users should not try lemon tek, for the same reason—though lemon tek shouldn’t be thought of as simply an “advanced trip,” as some experienced users find lemon-tek trips too short.

It’s also worth remembering that any specific dosing recommendations you may find are only suggestions, since potency can vary from mushroom to mushroom, even within the same strain, and human sensitivity can also vary. That’s one reason it’s always best to err on the side of too little, rather than too much.

Can I use bottled lemon juice?

Yes! The main thing is the pH of the juice.

Does lemon tek work with lime or other citrus?

It does work with lime, as the pH is the same. Most other citrus fruits are not acidic enough. Whether something is a citrus fruit doesn’t matter—what matters is its acidity. Balsamic vinegar might work, but orange juice will not work very well.

How long to soak for lemon tek?

Should I use fresh or dried mushrooms?

Most people use dried mushrooms, to be honest I’m not sure if fresh would work. Most likely it would, except you’d need to calculate the dose differently, and you’d need some way of pulverizing the mushroom that works with fresh mushroom—a grinder might not.

Can you microdose with lemon tek?

Can you take a heroic dose with lemon tek?

My personal opinion is that using lemok tek is a great way to take a heroic dose. However; this would only apply to experts. If you are beginner I would suggest a more gradual method that builds up to your trip, like shroom tea.