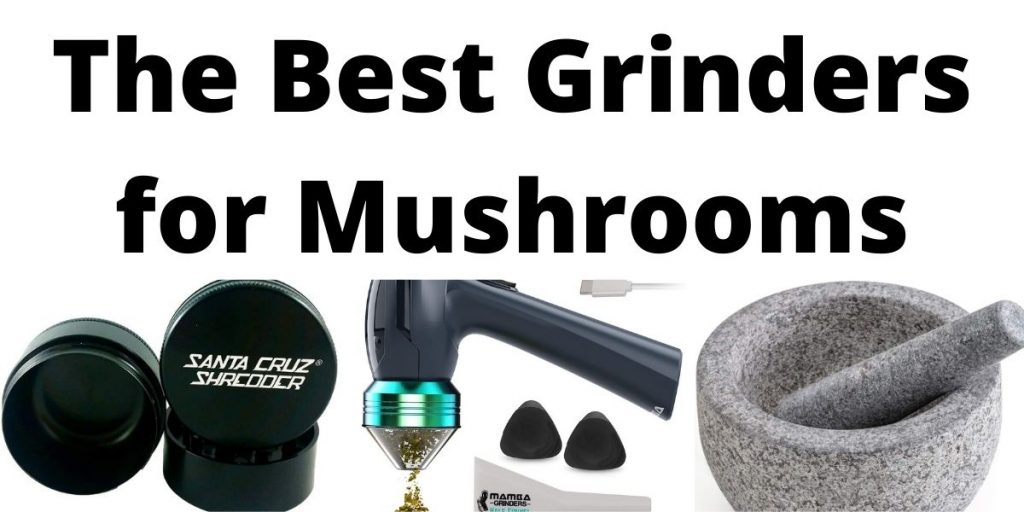 We’ll explain why you might want to grind your shrooms, what kinds of grinders are often used for mushrooms, and how to decide on a grinder that meets your needs. But first, let’s go over some basics.

Why Do You Need a Grinder?

How else are you going to turn your mushrooms into powder?

One reason to powder your mushrooms is to simplify dosing. Mushrooms vary in potency—even mushrooms of the same strain will not be exactly alike. And psilocybin isn’t evenly distributed throughout the mushroom tissue, either. There may be more-potent and less-potent regions. None of this matters very much for most recreational users, for whom a slightly stronger or weaker trip than expected is just part of the experience. But if you want a consistent microdose regimen, or if you are using a super-potent species where a slight difference in dose size could radically redirect your trip, then you need more consistency than whole mushrooms can give you. The solution is to use a grinder.

If you grind many mushrooms and then mix the resulting powder thoroughly, then for as long as the batch of powder lasts, you’ll be able to get the same amount of psilocybin per gram every single time[i].

The other reason to grind your mushrooms is if you want to mix them with food or tea or other liquid, or if you want to put them in capsules. Powdering also speeds absorption. Remember that heat destroys psilocybin, however—add the powder only after cooking is finished.

Things to Consider (What to Look for?) When Buying a Grinder

There are a couple of characteristics to keep in mind when shopping for a mushroom grinder. Ideally, your grinder will score high on all counts, but that’s not likely, nor is it necessary.  Instead, you have to think about trade-offs. Is higher quality worth a higher price? Is a small capacity OK if the grinder is really  easy to use? And so on.

For the most part, a grinder is a grinder, and your shopping adventure won’t be all that different from if you were looking for something to grind your weed or your coffee or the chia seeds for your morning smoothie[ii]. There are a few special considerations for mushrooms, though.

Is It Easy to Use?

Is It Easy to Clean?

Some electric grinders are all one piece (except for a lid) and are therefore impossible to put in a dishwasher and difficult to clean by hand. Getting under the blades without getting cut in the process is especially difficult with some designs. You want the opposite of that!

Is It Likely to Break?

What good is a grinder that breaks from ordinary use? Yet some do. Durable construction and thoughtful design are both important parts of making a grinder that will grind along in good condition long-term.

Is It Convenient to Store?

A good grinder will either be small enough to put away in a drawer or attractive enough to leave on display on the counter-top when not in use. Long, heavy cords or a lot of attachments and optional parts with no way to keep them together might cause more problems than they solve.

Will It Spill or Poof?

Nobody likes waste, but as mentioned before, there is an added reason to avoid spilling psilocybin dust—nobody likes unexpected trips, even people who like expected trips, an unexpected trips will happen if you have spilled powder lying around the kitchen waiting to contaminate the soup or stick to the fingers of a sticky-fingered child. A poof of dust into the air counts as a spill, too. While a couple of particles of powder won’t be enough to cause full-on hallucinations, they could be enough to alter somebody’s day without their permission. So designs that avoid spills are a good thing.

Does It Have Enough Capacity and Power?

Ideally you’ll want to be able to grind up a whole batch of mushrooms at once—enough for a whole course of microtripping or enough for you and a friend or two to try something adventurous. That might end up being a lot of mushroom, if you’re using one of the less-potent species. You want a grinder big enough to hold all that and strong enough not to burn out before the grinding is done. Of course, you could use a smaller grinder to do the job in batches, but it’s less ideal.

How much does it cost?

Grinders vary from free (see the Improvised Grinders subheading) to several hundred dollars (for a commercial unit). Generally, you get what you pay for, but you can usually get something decent by paying under $50—often, you can get something workable for under $20.

What Type of Grinder?

Not surprisingly, multiple types of grinder exist, and while none (that we know of) are yet marketed as mushroom grinders, some are better for mushrooms than others.

You can use a weed grinder for mushrooms, but with a caveat. Weed grinders have two chambers. The upper chamber holds the coarsely-ground herb, while a fine, THC-rich powder, called keif, falls through a fine screen into the lower chamber so the keif can either be smoked separately or added back in to the herb. Mushrooms have no keif. Mushroom particles that happen to be small enough will fall through to the keif chamber, so just remember to recombine the two grades of powder afterwards[iv].

Weed grinders come in both electrical and hand-turned versions. The latter have one advantage over coffee grinders—they have fewer moving parts, so they don’t break as easily.

Mini food processors are basically small blenders. They do work to grind up dried mushrooms, although the results may be inconsistent, with some big pieces making it through un-ground. They aren’t especially popular with shroomers, who tend to prefer coffee grinders or weed grinders.

A mortar and pestle is the original grinder. For those not familiar, a mortar is a bowl and a pestle is a short, thick stick with a rounded end, both of them made of ceramic or stone or some other hard material. The combination has been used to grind herbs, seeds, salt, or anything else that had needed grinding since the beginning of time. They work. They do not break, they last basically forever, and they require no particular skill to use. There is a particular romance, a kind of near-mysticism with using such an old, time-tested technology that seems very much in tune with mushroom use. The only drawbacks are that grinding takes a long time and that the pestle sometimes squeaks annoyingly against the mortar.

An improvised grinder[v] is one that you don’t buy but make using household objects. For example, take a pill bottle or other small jar, add dried mushroom and a clean dime, put the lid on, then shake and shake and shake and shake until the dime batters the shrooms to bits. Of course, there’s no guarantee of consistent product this way, but it works well enough, and the cost is unbeatable.

The Top 5 Grinders for Mushrooms

The following list isn’t in any particular order. We also can’t guarantee that there are aren’t other models out there that aren’t just as good–”best” is in the eye of the beholder, to some extent. But these five, in various ways, are all good mixes of the various things we look for in a grinder. 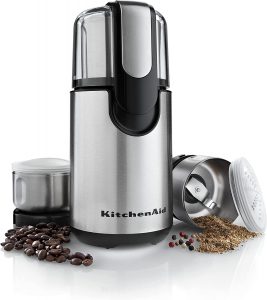 This coffee and spice grinder has a number of advantages over other coffee grinders in the under-$50 price category—and some of these advantages are of specific interest to shroom users. The top part of the grinder, the bowl that holds the material being ground, is detachable for easy and thorough cleaning. The grinder actually comes with multiple bowls, so you can have one dedicated for mushrooms and use the others for something else. And the top is clear, so you can see whether your mushrooms are fully ground yet without having to open up the lid and risk getting mushroom dust everywhere.

It’s worth noting that unless the user properly follows instructions—something some users evidently have trouble with—the grinder will leak all over. Reading and following the instructions is good. 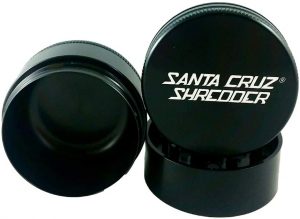 This one is a high-quality, hand-turned weed grinder that comes in a variety of attractive colors. It does not have a keif-catcher, which is just as well for those planning to use it for mushrooms. Durable, precision construction and teeth that don’t bump into each other, always a plus (actually, a necessity; some weed grinders have teeth that can bump together, eventually knocking bits of metal off into the product). A bit on the pricey side. 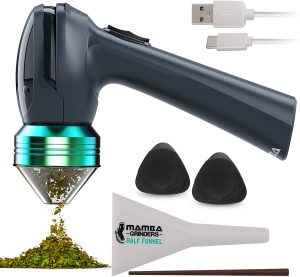 This one is an electric weed grinder. It’s a good option for folks with limited mobility or strength in one or both hands. Operation is simple and does not require a firm grip. What makes the Mamba an interesting choice for mushroom usage is the narrow spout opening, enabling the user to pour the product directly into a container with no risk of spillage (and associated accidental trips). The Mamba comes in three sizes and four styles, and while even the largest has only a two-gram capacity, that’s enough for some of the more potent varieties. 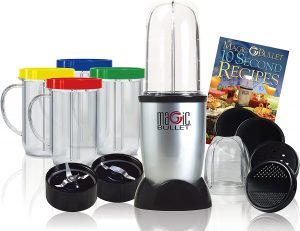 Here is a mini food processor with a whole lot of options and pieces and accessories. It does what it’s designed for well. It does other things badly, but the same can be said for most of us.

The magic bullet is mostly for small, quick chopping or pureeing jobs. For example, you could turn some pre-chopped fruit into baby-food or a small smoothie. Or you could, yes, turn some dried mushrooms to powder. Anything that requires more than a few seconds of work for the motor, or that involves large, hard-to-cut objects (ice-cubes, for example) simply requires a different machine. It is what it is.

Although food processors are not usually favorite mushroom grinders, this one does have some things going for it. Besides the typical blender-blade there is a grinder-blade option. There are multiple cups of various sizes, so you can dedicate one cup and the grinder blade to mushrooms and use the other attachments for something else. The cups are clear, so you can see whether your mushrooms are properly pulverized without opening up the grinder. And the entire unit is easy to use and easy to clean. 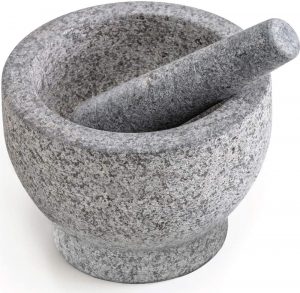 Anybody who really wants a mortar and pestle and follows the instructions for proper initial seasoning (very important!) will love this item. It is simple, very strong, and except under very odd circumstances, basically indestructible. Granite is one of the hardest, strongest minerals on Earth. Using a mortar and pestle does take elbow grease, and is therefore not a good option for everybody, but it’s a great option for some.