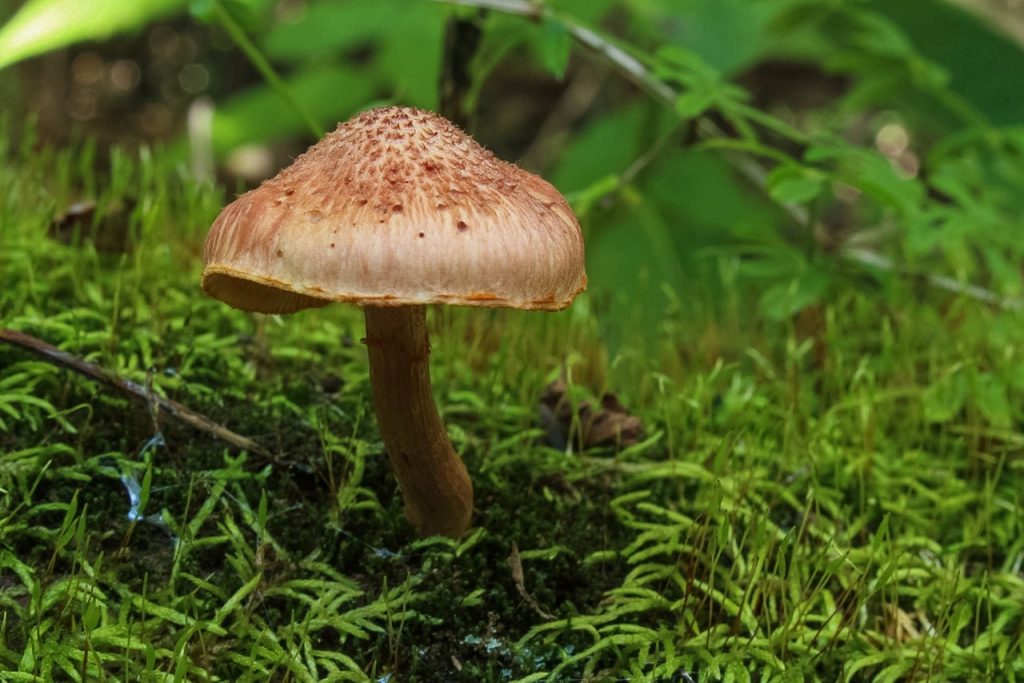 Identification of the Gymnopilus braendlei in North America by its morphologic characteristics is quite difficult, and some authors go even as far as saying that identification cannot be accomplished with scientific accuracy. Nonetheless, below are offered the characteristics features of this particular species.[iii]

Cap: Size of the cap can range from 2.5-5 centimeters. In shape it is hemispheric  becoming convex, often with a slight central umbilication. Gymnopilus braendlei is hygrophanous, meaning it changes color as it ages. Thus, while it is young, the cap is purplish in color; while its fibrillose, rolled-in margins are often lighter/pinkish. As it ages, it becomes pink and then yellowish with spots of green staining.
Gills: Gills are most commonly adnate, meaning broadly attached to the stem, but can sometimes be sinuate or smoothly notched before attaching slightly down the stem. While young, the gills are white or light yellow in color. As the mushroom ages, the gills first become mustard yellow and then finally bright orangish brown.
Stem: The stem of this species is 2.5-4 centimeters in height and 3-4 centimeters thick. Its is more or less equal in size throughout, but can have a slightly bulbous base. In color, the stem is pink at the base, yellow from the base up, and again pink at the apex. The stem is also covered with brown appressed fibrils, that turn white above the apex. Sometimes also present is a fibrillose fugacious veil that rapidly disappears, and can leave behind a silky zone.
Spores: The spores of Gymnopilus braendlei are orange-brown, with no germ pore. With regard to size and shape, they are 6 x 8.5 x 4.5-5 micrometers and are ellipsoid to ovoid.
Spore print: The spore print of this species orangish brown.
Flavor and Edibility: This species is purported to have a bitter taste. However, some authors report that not all Gymnopilus specimens are bitter, even if they are “supposed” to be.
Habitat and Range: Gymnopilus braendlei can be widely found both in Eastern and Western United States. They are most commonly seen growing during the months of June to November, on dead hardwoods either solitarily, in loose communities, or in small clusters. It’s most commonly found in Illinois and Washington.

Once again, it is important to remember that Gymnopilus braendlei cannot be accurately identified and differentiated from other species within the genus of Gymnopilus simply on its characteristics such as spore dimensions and/or presence/absence of a veil. Lastly, using the “bitter” taste as a differentiating marker is not advised, especially by novice mycophiles, as this mushroom can closely resemble several poisonous mushroom species.

This mushroom, as well as other from the genus of Gymnopilus, may be confused for mushrooms from the genus of Galerina and Pholiota. The Galerina genus contain several deadly poisonous species. Although, Gymnopilus mushrooms are generally larger in comparison, mushrooms from both genuses produce very similar spore prints and can easily be confused by the untrained eye. Thus, most authors advice inexperienced mycophiles from experimenting with Gymnopilus braendlei. [iv]

As mentioned at the start of this article, this species contains mild to moderate amounts of psilocybin and psilocin. Therefore consuming Gymnopilus braendlei will produce effects that resemble those of other psilocybin-containing hallucinogenic mushroom.

Consumption of  psilocybin can have variable effects from person to person. Overall, individuals may experience heightened emotions and senses. Hallucinations that distort the sense of reality, alter the perception of visual, auditory, gustatory, and tactile sensations, and change the sense of time can also be experienced. Other adverse mental effects individuals may experience can include mood swings, dizziness, anxiety, panic attacks, confusion, and even paranoia. Physical effects of psilocybin consumption mainly include paraesthesias such as numbness in the face, tachycardia, hypertension, dry mouth, nausea, vomiting, sweating, high body temperature, hyperreflexia, loss of urinary control, and even convulsions. [v]

Generally, the use of hallucinogenic/psychedelic mushrooms should not be attempted lightly as it can have serious adverse effects on the users health. Despite this, many individuals use psilocybin-containing mushrooms for a variety of cultural and spiritual ceremonies, and their use is even being considered in the medical community for terminally-ill patients.

Gymnopilus braendlei has mild to moderate potency, similar to other species in the genus of Gymnopilus. However, information on specific concentrations of psilocybin or psilocin in this mushroom is unavailable.

Unfortunately, there is no readily-available literature regarding topics such as suitable spawn mediums, methods of inoculation, colonization times, incubation, triggering of fruiting, or harvesting for this specific species of mushroom. However, some species within the genus of Gymnopilus are not psilocybin containing and have been cultivated for food. It would be reasonable to assume that techniques used for the cultivation of these species could be suitable for growing Gymnopilus braendlei. If that doesn’t work you might want to try other methods that are used to grow magic mushrooms such as SGFC, Monotub Tek or PF TEK.

However, it might be useful to know that Gymnopilus genus mushrooms grow well on hardwood logs and wood chips, love warm temperatures, and are partial to sunlight.

The dosage of psilocybin contained within Gymnopilus braendlei is quite difficult to calculate. The amount of this tryptaminergic substance contained within a given mushroom sample is highly variable, and depends on the age of the mushroom, state of its preservation  (fresh vs dried), the environment in which it was grown, and on various other factors. As such dosing is always imprecise.

For example, a cousin of Gymnopilus braendlei, Gymnopilus purpuratus was found to have .23% psilocybin and .21% psilocin in cultivated specimens.

As such, if desired it is best to err on the side of caution and ingest minute quantities of this species and observe their effects. Then the quantity can be adjusted to achieve the desired dose-response relationship. Additionally, it is important to remember that a considerable physiological variability exists between individuals, and this can influence dose-response as well as toxicological profiles.[vi]

Popular methods of consumption for Gymnopilus Braendlei include Lemon Tek and Shroom Tea.

Psilocybin and psilocin are listed as Schedule I substances under the the United States Controlled Substances Act, making it illegal to buy, cultivate or possess psilocybin-producing mushrooms for either personal consumption or distribution.[vii]

However, in several states it is legal to grows psilocybin mushrooms for personal use. Therefore, it is best to check your local rules and regulation regarding purchasing, growing, and/or consuming psilocybin containing mushroom, such as Gymnopilus braendlei.

Psilocybin containing mushrooms are considered to have extremely low toxicity, but as mentioned above considerable physiological variability regarding toxicity exists from one person to the next.

The safety of these mushrooms is very difficult to predict, as they do not produce predictable physical and psychological effects. Thus, safety is highly dependent on set and setting rather than the mushroom itself.

Concerning side effects can include “bad trips”, which are frequent at high doses. These experiences are often frightening for the users, and result in loss of boundaries and distortions of their sense of self leading to risk-taking behaviors, which may then lead to traumatic injuries or even death.

Effects of these mushrooms mentioned above can be significantly exaggerated if other substances such as cannabis, amphetamines, or alcohol are concomitantly used.

Lastly, some individuals can be left with recurrent “flash-backs”. These events refer to spontaneous recurrences of acute effects of psilocybin that can occur weeks after the initial episode of use and can be highly distressing.

[i]       Stamets, P. (1996). The Minor Psilocybin Genera. In Psilocybin mushrooms of the World: An Identification Guide. essay, Ten Speed Press.