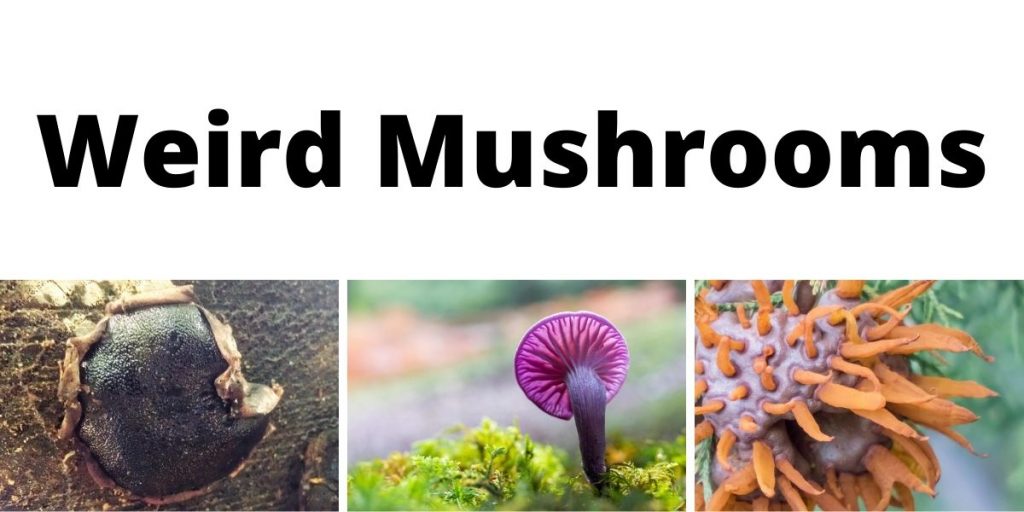 Some of these are really cool.

We’re calling these “weird mushrooms” because they don’t fit into any other category but they’re way too awesome to just ignore. And, well, what else would you call a fungal fruiting body that looks like a dog’s nose or a bird’s nest?

Not all of these are actually mushrooms. Some are fungal fruiting bodies of other types, but there are also a few that are often mistaken for fungi and aren’t. We figure that if you see one of these, you might think “oh, that’s a weird-looking mushroom,” so we’re including them.

“Weird” is subjective, of course. If you are familiar with these fungi, they won’t seem weird at all. But chances are you are not—these are either very small or rare or both. And they stand out for being just a bit different from the fungi you likely are familiar with. 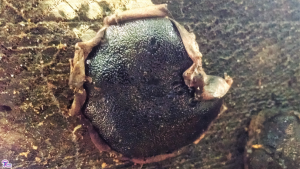 “Dog-nose fungus” is not a well-established common name, but this species is rare enough that it doesn’t have a common name, and dog-nose is the best proposal we’ve heard. This fungus[i] has a fruiting body that consists of a round shield-like structure that is black, damp, and slightly pebbly in texture—it looks exactly like a dog’s nose-pad, except for the absence of nostrils. It’s even about the right size. Just a dog’s nose on a tree-branch, no big deal, right? 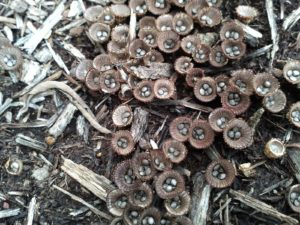 There are actually many birds’ nest fungi—a whole family of them[ii]. They all have fruiting bodies with variations on the same structure: a tiny cup (very large ones might be at much as a centimeter across) with several objects inside that look like beans or eggs. In some species, the immature cups have a cover over the top that ruptures later.  The “eggs” contain spores, like miniature puffballs. The first stage in spore dispersal happens when raindrops splash the “eggs” out of the cup, but what happens next nobody knows.

The fungus eats rotting wood, and often fruits in large groups from old mulch—they’re not at all rare, you just have to look closely to see them. 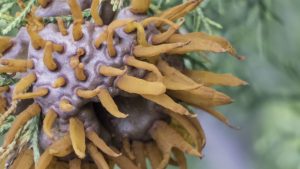 This fungus[iii] actually does have a direct impact on human lives, since it causes a disease of apple trees and their relatives (crabapple, quince, and so forth) that can reduce yield. Apple-growers do what they can to fight the fungus, including cutting down any nearby junipers. Apple-cedar rust, like many of its relatives, requires two very different hosts to complete its life-cycle, and the other, in this case is a juniper or related species (the term, “cedar” is used for multiple species, some unrelated to each other. Some “cedars” are actually junipers). The details of this life-cycle are intricate and fascinating, but what attracted our attention was the fruiting bodies that forms of the “cedar” part of the cycle.

These bodies take the form of hard, round growths on the twigs and branches. These growth develop long orange horns that, under the right conditions, expand and become flexible, releasing spores (one of the four different types of spores the fungus makes, depending on where it is in its cycle). These horns have been aptly described as resembling gummy worm candies. Heavily-infested junipers are said to look like decorated Christmas trees. 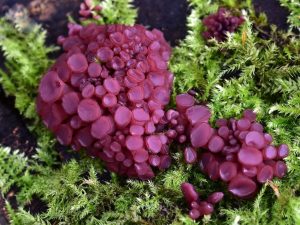 We came across this species[iv] while looking for information on jelly fungi, some of which (such as witches’ butter) are edible. The purple jellydisc is not considered edible, though we’re not sure whether anybody’s actually tried eating it yet—no, we’re not going to try the experiment; it could turn out to be poisonous. Anyway, it’s interesting.

The fruiting body takes the form of a somewhat gelatinous purple blobby about a centimeter long, sometimes larger, and sometimes cup-shaped or tooth-shaped. The tiny blobs usually grow in dense groups and can together look rather brain-like. Curiously, these blobs produce either of two types of spores, one sexual, the other asexual.  Each type belongs to a distinct phase, and the fruiting body has a distinct appearance at each phase, but not so distinct that experts can always tell the difference without a microscope. 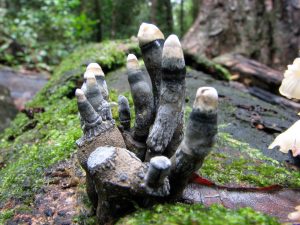 This fungus[v] has fruiting bodies that come in many forms, as the scientific name implies, but they are usually some variation on finger-like in shape and size. Worse, they vary in color from white during the asexual state to brown or black or greenish during the later sexual stage—meaning it’s not impossible to find, poking out of the ground, a group of five or ten finger-like objects the same greenish-black color as one imagines for rotted flesh, complete with whitish tips like finger-nails!

Fortunately, they’re not zombies (that would be a completely different fungus[vi]), and they’re not after brains, only well-rotted wood. 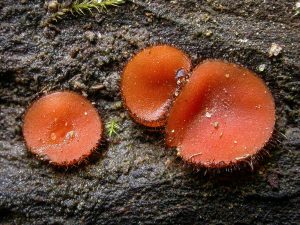 You might object that plenty of fungi have cup-shaped fruiting bodies—what’s so weird about that? Well, nothing, except this one[vii] also has eyelashes around the rim. Yes, eyelashes, black hairs that look so much like miniature human eyelashes as to be almost creepy. You won’t see the eyelashes unless you look very closely, and might not see the cup at all, since even an unusually large one will still be less than two centimeters across. Fortunately, they fruit in groups or clusters, making them slightly easier to notice. Look carefully on or near rotting logs.

Here are some large categories of organism that are often mistaken for fungi or otherwise misunderstood. It’s a shame that they’re misunderstood, as most are really worth getting to know. 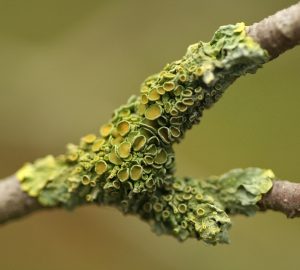 Lichens[viii] are fungi, but they’re not just fungi. A lichen is a mutualistic partnership between a fungus and an alga (plural: algae) or a cyanobacterium (what used to be called a blue-green alga), or sometimes both an alga and a cyanobacterium. The fungus, or mycobiont, protects its partners from the elements and provides structure and shape, while the others, the photobionts, provide food through photosynthesis. The mycobiont can’t live in the wild alone, while the photobionts can—just not in as many places. Without the protection of the fungus, they need constant moisture. Because a lichen is a collection of organisms, reproduction is usually by some sort of budding. The fungal partner can also reproduce sexually and release spores, though the baby fungi will die unless they find the right partner very quickly. The algal partner is more limited. Although these algae can reproduce sexually when living free, once an individual alga joins a lichen partnership it loses the ability.

Lichens come in many shapes, including long strings, tiny tree-like structures (dried lichens are used as trees in model train set-ups and similar crafts), crusts, and leaf-like structures. Some are often mistaken for mosses. For example, reindeer moss is a lichen, not a moss. Colors include blue-green, bright green, white, gray, yellow, and black. Although each lichen is actually a group of completely unrelated organisms, they come in clearly recognizable kinds that can be treated as species. The convention is to use the scientific name of the fungal partner as the name for the lichen as a whole. Curiously, the lichens are not a taxonomic group—some lichenized fungi are more closely related to non-lichenized fungi than to any other lichens.

Lichens are generally not edible by humans or by most other animals (reindeer are an exception; reindeer “moss” is their primary food), though a few become digestible if processed properly. Some have medicinal or other uses.  Mostly they just do their own thing, although many are very important ecologically. Lichens can grow in places where nothing else can and are often the first stage in the creation of new soils. Many are capable of cryptobiosis, meaning that in poor conditions they can completely shut down all life processes—die, essentially—and then come back to life when conditions improve. They grow very slowly, so it’s important not to damage them unnecessarily. Even a small patch can take decades or more to regrow. 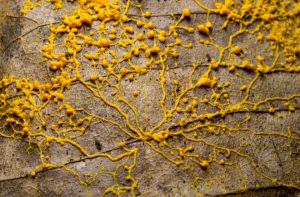 Slime molds[ix][x] are not molds. The fruiting bodies of some of them do look vaguely fungal, and at one time they were classified as fungi. Now, “slime mold” is considered a casual (not scientific or technical) term covering multiple completely unrelated groups. What all these groups have in common is that it’s difficult to say whether they’re unicellular or multicellular and also that all are more or less blobby during at least part of their life-cycle. Most are small, but some are quite large. And unlike in the movie, The Blob, none ever attack humans.

Some exist as a swarm of separate, single-celled amoebae that join together and begin acting like a multicellular organism under some circumstances. Others exist as many cellular nuclei within a single cellular membrane. In either case, they can move, creeping along the ground and climbing over objects, something no fungus can do.  At least some can make decisions and even solve mazes (no one has yet suggested that they’re sentient, but they do pretty well for beings without brains). All of them eat by engulfing food particles. They can eat a very wide variety of foods, but do have their preferences.

Slime molds (many of them, anyway) do have a somewhat fungus-like reproductive system. The organism that germinates from a spore mates by merging with another of a compatible mating type (mating types are like sexes, but there are more than two). The merged organism eventually produces spores that start the cycle over again. The fruiting bodies that produces the spores can resemble pink or yellow foam or sponge, tiny hairs or brushes, little balls on bitsy stalks, or dog vomit, among other shapes. Some slime molds can arrive at a good spore-release site, form fruiting bodies, and produce spores all within a matter of minutes. 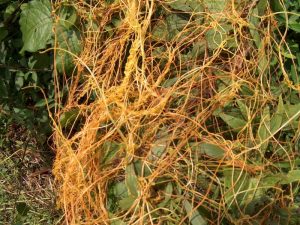 Parasitic plants derive most or all all their energy from either a fungus or another plant, so they don’t need chlorophyll. Many are just roots, with no above-ground parts, except at flowering time. Because many of them aren’t green and have tiny leaves or none at all, they are often mistaken for fungi, but biochemically and structurally, they are plants. Most of them are not closely related to each other and in fact have close relatives that are fully green.

Parasitic plants include: dodder (Cuscuta sp.), a large genus of plants that look like yellow, orange, red, or greenish string laying across the host plant[xi]; ghost plant (Monotropa uniflora), a parasitic wintergreen that bears a single, nodding, white flower on an all-white stalk[xii]; cancer-root (Conopholis americana), which looks a bit like a yellow-brown pine-cone poking up out of the ground[xiii]; and mistletoe, a group of related genera that all became parasitic independently of each other and all live in or on the branches of the host plant[xiv]. Some have green leaves, while others are orange, leafless stems. Still others live entirely within the host except to flower.