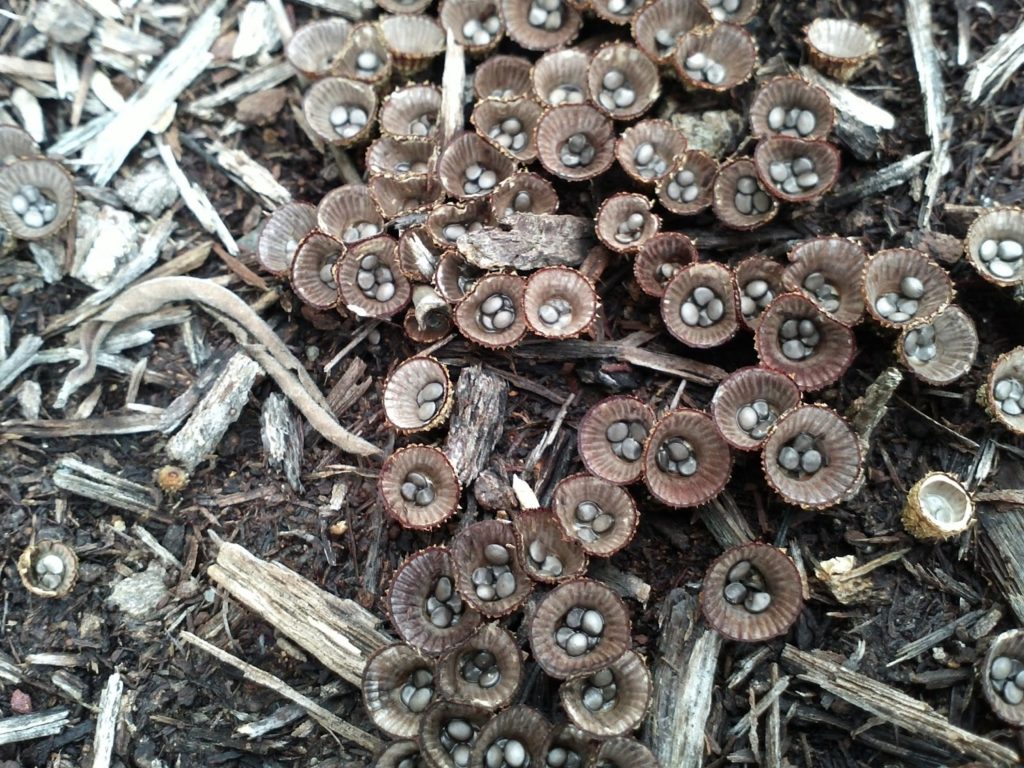 The family of Nidulariaceae is Bird’s nest fungi with ‘nidulus’ meaning a small nest. The name is apt since these fungi look like little Bird’s nests holding small peridioles that resemble eggs. They have also been called splash cups, do their method of reproduction. They are quite difficult to find since they are so small and like to grow in dark areas, but typically nests have five to eight eggs in them.

There are five genera in the Bird’s nest fungi family, the most common Bird’s nest fungus is also known as Crucibulum laeve. The different Bird’s nest family members can usually be identified by the shape of the cup and the peridiole color; they include Nidularia, Nidula, Cyathus, Crucibilum, and Mycocalia.

The eggs of the Bird’s nest fungi are unique for its reproduction since they hold the spores, and the cups act as ‘splash cups.’ When rainwater strikes the little cups, the splashing ejects the peridioles (the eggs) containing the spores up to four feet. Some peridioles have a sticky cord that attaches the eggs to the cup; this cord enables it to stick to nearby plants, twigs, or buildings. Once the peridioles dry, the spores are released. The spores are also dispersed when animals eat the fungus through feces or disturbance.

Because they are saprobic, Bird’s nest fungi feed on decomposing organic matter and have excellent composting abilities. They are often found growing on decaying wood, mulch, and wood chips —Bird’s nest fungi like cool and moist locations, specifically rich soils and areas with animal feces.

The Bird’s nest fungi were first described by Carolus Clusius, a Flemish botanist in 1601 in a book called Rariorum plantarum historia. Originally, incorrectly, the little eggs were thought to be fungi seeds. Fossilized remains of some bird’s nest fungi found in the Baltic and Dominican Republic show that some of their basic characteristics were developed 40 to 50 million years ago.

Typical Bird’s nest family members include, but are not limited to:

Nidularia deformis, Nidularia means ‘little nest’ and these pea-shaped Bird’s nests are commonly found in Europe, including Scandinavia, France, and Germany. Also, sightings have been reported in New Zealand, Australia, and Northern America.

Cyathus striatus known as the Fluted Bird’s nest is found in Europe, Asia, and Northern America. Fairly common in Britain and Ireland. Inside the fruiting body are grooves, and the outside of the cup is hairy. The cyathus striatus has shown some potential as an anti-microbial and in brain cell outgrowth.

Crucibulum laeve, much like Cyathus striatus are found in mainland Europe and Asia and many regions of Northern America. Because this is the most common of the Bird’s nest fungi, it is called Common Bird’s Nest.

Mycocalia denudate has a small barrel or lens-shaped cup, and reported sightings to include Newfoundland, Britain, and Ireland.

Nidula candida is typically found in North America, the Japanese mountains, the Blue Mountains of Jamaica, and The Himalayas. This fungus has a bioactive component that sees it used in pesticides to attract insects.

Fruiting Body: Cup-shaped fruiting body called peridia containing peridioles attached by a small cord (in most.) When very young the cup has a thin membranous lid, this disappears quickly, revealing the eggs. Cups vary in size from 1.5mm to 10mm across and 3mm to 18mm tall. Eggs up to 3mm across. – Nidularia are light brown and have no cord; Nidula are white, gray or beige; Cyathus are brown, or a greyish brown and the cups have small hair-like structures; Crucibilum is light brown, or cinnamon and Mycocalia are white and thin.
Peridioles: Spore filled hard, waxy shell-like structures. Color is dependent on the genera – Nidularia and Nidula are brown and squashed; Cyathus  are black; Crucibilum are  black but covered with white membrane, and Mycocalia are yellow to reddish-brown.
Gills: Instead of gills, they have the ‘eggs’ that produce the spores.
Stem: Absent.
Smell: Not described.
Taste: Not described
Spores: Smooth; oval or elliptical.
Spore color: White or brown.
Edibility: Not edible but not reported to be poisonous.
Habitat: Decaying wood, bark mulch, twigs, parks, and gardens. Dark and moist environment preferred. Mostly found in clusters. Commonly found growing in Late Summer and Fall; may persist into Winter. Appear in wet weather.

There are many varieties of Bird’s nest fungi, and they are reportedly not harmful to humans or other plants. They are so unique that they are easily identifiable by both the trained and untrained eye.

Cyathus striatus has shown some potential benefits as an anti-fungal, antibiotic, and neurite growth, while Cyathus africanus also showed promising neurite outgrowth effects in addition to anti-inflammatory effects. Neurites are projections that come from the cell of a neuron (brain cell).

Early research suggested that Cyathus striatus had some antibiotic effect against both Gram-positive bacteria and some fungi. The bioactive components were three striatins A, B, and C that were isolated from the fungus, which conferred this ability [1.].

Factors that encourage nerve growth have clinical relevance in neurodegenerative diseases such as Alzheimer’s due to their ability to promote nerve growth, potentially replacing those brain connections lost to such conditions. A study in vitro showed that six striatoids isolated from Cyathus striatus, dose-dependently increased neurite outgrowth in rat cells [2.]. This is encouraging research indicating the neurological potential of these fungi.

In another study, eleven new cyathane diterpenoids, called cyafricanins A-K (1-11) were isolated from Cyathus africanus another Nidulariaceae, Bird’s nest fungi. The researchers wanted to investigate its effect on nerve growth and impact on brain cell inflammation. All eleven diterpenoids showed neurite outgrowth potential; two showed promising effects of nerve growth, and one showed strong inhibitory effects on factors that are involved in the inflammation pathways [3.]. Inflammation in conditions such as cancer and neurodegenerative diseases can promote a diseased state and worsen symptoms.

Cyathus striatus also contained the highest levels of lovastatin in its mycelia (995.66mg/kg), when compared to 39 other mycelia. Lovastatin is used to treat high blood cholesterol and also cardiovascular disease [4.], indicating a potential therapeutic could be developed from these fungi.

Pancreatic cancer cells treated with culture liquid of Cyathus striatus (50µg/mL) showed the highest level of cell death when compared to over 30 other mushroom extracts [5.]. Pancreatic cancer is one of the deadliest cancers, and research is actively looking to exploit the bioactive properties of mushrooms.

The Bird’s nest fungi are not considered sufficiently big enough or fleshy enough to eat since they are generally only a few millimeters wide and tall; you would need to forage a fair few to make a meal. They have also been described as having a leathery texture. There are no dosage recommendations in humans.

The Bird’s nest fungi are not known to be harmful. It is always prudent to check with a professional mycologist before ingesting any fungi is foraging to ensure that the fungi are in fact, edible and not a toxic species. Err on the side of caution due to potential allergic reactions if deciding to eat for the first time.