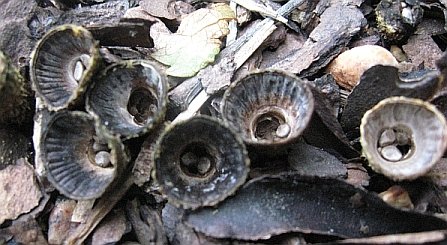 Fruiting body: 5-15 mm tall, 4-8 mm wide at the top; cone-shaped to cup-shaped. The outer surface is coarsely hairy. Has reddish-brown to chocolate brown to gray-brown fruiting bodies with distinct lines or grooves on the inner surface. Contains several thin, gray to grayish-brown oval ‘eggs’ (peridioles), 0.5-2 mm wide. The peridioles are attached to the cup by a cord, called a funiculus. It is easy to miss these oddball fungi because of their small size, and because their color tends to blend into the surroundings.
Habitat: grows on decaying wood, small twigs and other vegetable debris.

The mycelia and cultural filtrates of C. striatus were tested for antibiotic activity against Bacillus cereus, Bacillus subtilis, Staphylococcus aureus, Escherichia coli, Proteus mirabilis, Salmonella typhimurium and Candida albicans. C. striatus was shown to have antibacterial activity against B. cereus and B. subtilis (Colletto and Giardino, 1996).

Antibiotics named striatins A, B, and C have been isolated from the mycelium of Cyathus striatus. The striatins are active against a variety of Gram-positive bacteria, some Gram-negative bacteria, and highly active against fungi imperfecti (Anke and Oberwinkler, 1977). The chemical structures of these antibiotics have been elaborated using X-ray crystallography (Hecht et al., 1978). A later study investigated the optimization of striatin production using fermentation technology (Gehrig et al., 1998). Striatins A and B were tested in culture media against various forms of Leishmania species and Trypanosoma cruzi. These protozoa cause diseases that are responsible for considerable mortality and morbidity, especially in tropical areas. Striatins A and B showed in vitro activity at 10 and 5 µg/ml, respectively. BALB/c mice infected with Leishmania amazonensis were treated 3 weeks post-infection with striatins A or B (daily dose of 10 mg/kg, subcutaneously, for 15 days). Treatment with the reference drug, N-methylglucamine antimonite (an anti-leishmanial drug with known properties), reduced the parasite burden by 71.2%. Treatment with striatin A slightly decreased the parasite burden in the footpad by 17.6%; treatment with striatin B had no effect and was more toxic than striatin A (Inchausti et al., 1997).

NF-kB (nuclear factor kappa B) is a protein complex that is involved in regulating the immune response to infection. Alterations in the body’s response to NF-kB has been implicated in the pathology of various diseases, including cancer. For instance, it is known that in several human cancers, the NF-kB gene regulation pathway is always turned on, disrupting normal gene expression patterns and enabling some cells to survive in conditions where others would die. Fungal extracts prepared from Cyathus striatus showed significant inhibitory effects on the NF-kB activation pathway, suggesting activities worthy of investigation as cancer therapeutics (Petrova et al. 2006).