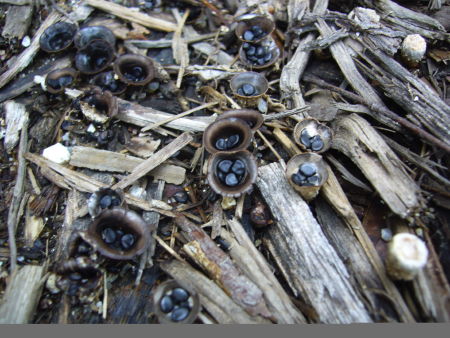 Fruiting bodies: up to 1.5 cm tall x 4-8 mm wide, goblet-shaped (obconic) “nests”. The inner surface is nongrooved and nonfurrowed, which helps distinguish it from the related bird’s nest fungi Cyathus striatus. The outer surface is tomentose (more so when young) and yellow-brown in color, becoming smoother and darker in color in maturity. Periodioles are attached to the fruiting bodies by a thin cord called a funiculus. Peridioles are dark grey to black in color, 1-2 mm in diameter.
Spores: variable in size and shape, but typically globose or oval, smooth, thick-walled, and 18-40 x 18-30 µm. Further details about spore morphology may be found in Brodie and Dietrich (1977).
Habitat: this saprobic species is found growing on dung of herbivores, on soil containing manure, or on wood chips. Grows gregariously or in dense clusters.

The ultrastructure of this species has been described in detail (Flegler and Hooper, 1978).

The polyketide antioxidative compounds, cyathusals A, B, and C as well as the previously known compound pulvinatal have been isolated from C. stercoreus (Kang et al., 2007). The cyathusals have antioxidant activity (measured by DPPH and ABTS radical scavenging assays) roughly comparable to reference antioxidants Trolox and BHA.

Further investigations led to the discovery of of cyathuscavins A, B, and C along with the known compound 4-hydroxy-6-propenyl-pyran-2-one (Kang et al., 2008). The former 3 compounds showed good antioxidative activity, as measured by radical scavenging activity in the DPPH assay, and the ABTS+ assay. Cyathuscavins A and B (but not C) also scavenged superoxide (O2-) radicals more effectively than the control compound BHA. All three cyathuscavins also protected supercoiled DNA from Fenton reaction-mediated DNA breakage.