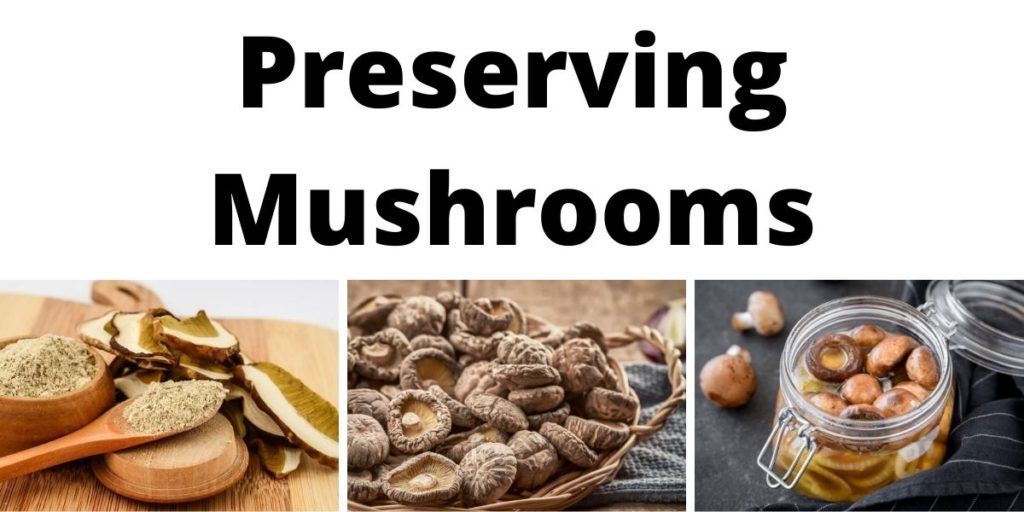 It’s a sad truth, but nothing lasts forever, not even fresh mushrooms. In fact, improperly cared-for mushrooms—those put in an improper foraging bag, for example—can rot within hours. Fortunately, there are ways to make the harvest last longer.

To begin with, it’s important to let mushrooms breath. Most can be stored in a mesh or paper bag for some time, though it’s better to get them out on a counter-top or a wide basket as soon as possible to maximize airflow. Some mushrooms, such as puffballs, should be refrigerated. Most should not be allowed get wet, though there are exceptions.

But all mushrooms should be either eaten or processed for longer-term storage pretty quickly.

There are a number of methods of preservation. Drying and freezing are probably the most popular, but they are far from the only options, nor are those two always the best options in all circumstances.

How to Preserve Mushrooms: The Top 6 Ways

Please note that results for all of the following methods[i] vary a lot depending on the species of mushroom in question. Some become flavorless when dry, turn to mush when pickled, or have some other problem. All preservation methods will alter flavor or texture or both to some extent; the trick is to match the method to the species so that the change is either minimal or actually an improvement.

There are too many mushroom species out there for an article this size to list the proper preservation methods for each.

All preservation methods will also alter how the mushroom can be used. Sometimes the alteration is minor, sometimes it is profound. The choice of method thus depends on the species of mushroom, what  a person wants to do with the preserved mushrooms, and how much a person enjoys spending time processing mushrooms.

This list is not exhaustive, but does include the most popular and most widely useful methods. They are listed in rough order from those that alter the mushrooms the least, leaving them available for the same uses as fresh mushrooms, to those that transform the mushrooms into something very different (but delicious).

Most (not all) mushrooms are easy to dry. In some climates, small mushrooms will even dehydrate on their own if left in a paper bag, though in most cases such a hands-off approach risks rot. A food dehydrator can dry mushrooms to a cracker-like consistency in which they can last more or less forever, provided they are kept somewhere very dry (in humid air a dry mushroom can absorb enough moisture to support mold). Another option is to slice the mushrooms thinly and lay the pieces out, not touching, on a clean table top for a few days—the result might not be perfectly dry (the pieces may remain pliable, rather like the texture of packing peanuts), but they will last for weeks or sometimes months before mold sets in, even in an ordinary jar in the cabinet. And because mushrooms shrink dramatically when they dry, a large harvest can fit in one or two quart jars.

The open-air drying technique does not require an especially dry climate, requires no special equipment or skill, and is a great option for people who want to make a couple of pounds of mushrooms last for a few weeks. To rehydrate, simply keep the mushrooms wet for a few minutes (soaking is not necessary) and cook as normal. Add any excess rehydration water to the cooking mushrooms, to avoid losing flavor.

Most popular edible mushrooms, including shitakes, criminis, and oysters dry well with little to no loss of flavor or texture. There are exceptions

This is the Best Food Dehydrator for Drying Mushrooms

Many food writers prefer freezing mushrooms to drying them, insisting that even species that shouldn’t be dried take well to freezing. Others complain that freezing makes most mushrooms stringy, chewy, or else soft and mushy. It is difficult to get a straight answer, except by trial-and-error in the kitchen, but there are tried-and-true methods for making freezing work better.

It’s worth noting, too, that not all texture-changes are bad. Previously-frozen shitakes are excellent in faux-clam chowder, since freezing gives them a meaty chewiness similar to cooked shellfish.

The ideal technique for freezing depends on the species. Some should be frozen raw, others should be frozen cooked (sauted or steamed), and some can go either way. The higher-quality the mushroom, the better it will stand up to freezing. Flash-freezing (which requires a very cold freezer) gives better results than gradual freezing, and it’s usually best to freeze the mushrooms spread out, not touching each other, on a dry tray, before transferring them to a bag—that way, they’ll stay separate in the bag and can be used a few at a time. Get as much air out of the bag as possible, to protect from freezer-burn.

Even under the best of circumstances, mushrooms don’t last in the freezer more than a year. Some don’t last that long. Older frozen mushrooms won’t get dangerous to eat, they simply become unpalatable.

These days, most people who pickle mushrooms probably do it because they enjoy the taste of pickled mushrooms—which is quite distinct from the taste of the same mushroom species cooked fresh. But pickling was initially developed as a food preservation method, and it’s still a good way to put by a large harvest of mushrooms for eating over the following months.

There are a number of important caveats.

First, and most importantly, an improperly pickled batch can become an incubation chamber for deadly botulism. The key to avoiding death-by-edible-mushroom in this case starts by having a good understanding of what pickling is and isn’t—and it isn’t canning.

Canning is a different food preservation technique, one that relies on heat sterilization. Pickling, in contrast, depends on the acidity of the food to keep bacteria at bay. Mushrooms aren’t acidic so, like cucumbers or string beans, they must get a bath in vinegar and salt in order to pickle. It’s easy to confuse the two methods, especially since most people go on to can their pickles for an added layer of safety. But the critical factor with pickling—the pH of the food—doesn’t matter with canning, and heat isn’t necessary for pickling. Not all recipes explain the difference, so a beginner could easily alter a recipe and end up with jars of mushrooms that never got hot enough for canning and never got acidic enough for pickling. Such jars become botulism factories.

It’s not difficult to pickle correctly, but it is important.

The other caveat is much less dire; not all mushroom species can retain a palatable texture when pickled. Even then, the mushroom might have to be young and in good condition. Pickle the wrong mushroom and the result might be only mush.

This is my favorite Pickling / Fermentation Kit

Mushroom powder is easy to make; just dry mushrooms, them pulverize them. Powders don’t always keep their flavor as long as intact dried mushrooms, but they are a good option for species that are either too tough or too delicate to take well to drying. Mushroom powder can’t be rehydrated back into whole mushrooms again, but it can add flavor to soups, stews, and sauces.

Note that powdered dried mushroom is a very different product than the dried tinctures sold for their medicinal benefit. If the latter have medicinal value (a still-open question, in most cases), it is because they are properly-prepared extracts (See: Tinctures vs Powdered Extracts), not because they happen to be powdery.

Duxelles[ii] is a finely chopped mixture of mushrooms and herbs (such as shallots and thyme) and salt, pan-fried in oil, sometimes with sherry or cream. The result looks a lot like ground beef, but is actually concentrated mushroomy goodness. It can be used as a spread, as a stuffing, or as an addition to gravies, sauces, dressings, omelets, or almost anything else.

Duxelles itself is not especially rot-proof, but it counts as a mushroom-preservation mix because it takes freezing very well. The oil content protects the flavor, and because the mushrooms are already finely chopped, freezing will not alter their texture. In order to freeze mushrooms that normally should not be frozen, first make duxelles.

“Ketchup” properly applies to a whole family of sauces, of which tomato ketchup is only one example. Mushroom ketchup[iii] is indeed a ketchup, too, it just doesn’t involve tomatoes. It can be used as a condiment or added to recipes to improve flavor.

Generally, mushroom ketchup is a sauce made from a concentrated broth cooked down from bits and pieces that aren’t wanted for anything else—stems, broken bits, mushrooms picked well-past their prime, and so forth. There are many different variations; thin ketchups, thick ketchups, cloudly ketchups, and clear ketchups (even the “clear” ones may be dark, rather like soy sauce). Many recipes call for straining the mushroom pieces out of the finished sauce, but it’s also possible to leave them in and puree the whole thing.

Mushroom ketchup contains enough vinegar and salt to substantially slow spoilage. It doesn’t usually rot. However, there is not so much salt as to prevent the growth of all microbes, and it can develop an “off” taste if left out too long. Most people keep mushroom ketchup in the fridge.