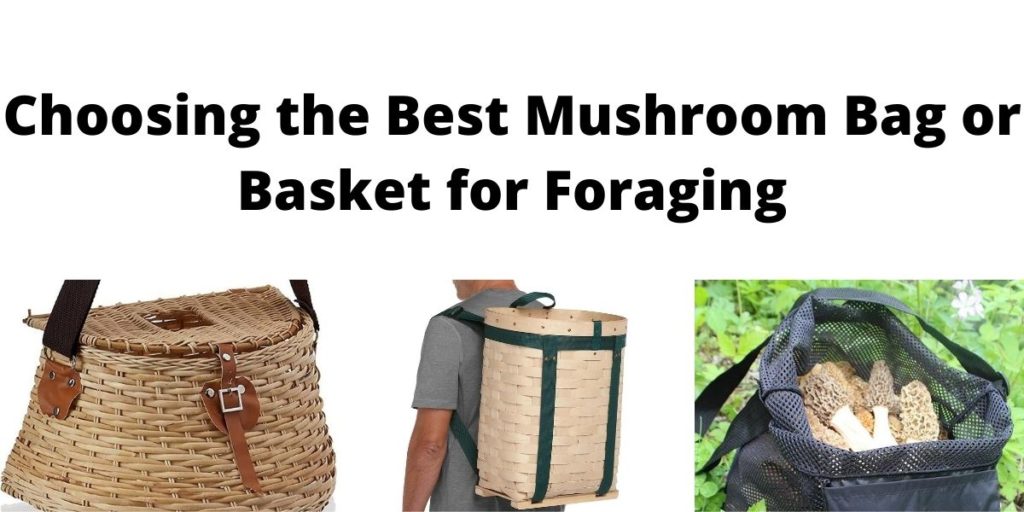 Many people say that all anybody really needs to hunt mushrooms is a basket, a knife, and some know-how. That’s more or less true, except the “basket” could just as easily be a mesh bag, a backpack, or even a plastic sack—though there are important caveats to using plastic. There are products sold specifically for carrying home mushrooms, but many people prefer to improvise or even make their own. As one might expect, every mushroom hunter has their own favorite options, and preferences can change over time.

There is no hard-and-fast rule about what sort of container to carry the mushrooms in, so novices are free to figure it out for themselves—but reading up on what other mycophiles do is a good way to avoid too much reinventing of the wheel.

Note that “mushroom basket,” “shroom sack,” “foraging bag,” and “collecting bag” are all standard terms for this hunter’s accessory, but internet searches for “mushroom bag” tend to return mushroom grow bags instead.

Considerations for Choosing a Mushroom Basket, Bag or Sack

The choice of a mushroom container depends on several considerations, some of which contradict each other; the most convenient option might damage the harvest, for example. Individual foragers must decide how to weigh their various competing priorities, and the results of that decision will go a long way towards narrowing down the options.

Note that while cost is a consideration, there is a clear clear trade-off, the free options generally tend to break more often.

The height of convenience would be a used plastic grocery bag. They fit easily in a pocket when not in use and take up almost no space, so a mycophile with a folding knife in one pocket and two or three plastic bags wadded up in the other is ready for that next flush of mushrooms no matter where it might occur.

On the other hand, storing mushrooms in plastic can turn edible mushrooms toxic[ii], possibly by fostering the growth of bacteria through restricted air-flow and the retention of moisture. Even if the mushrooms don’t become toxic, those stored in plastic can quickly become inedible. Using a bag to carry home a few mushrooms from either the field or the farmer’s market is usually fine, but it’s important to transfer them to something more permanent within a few hours at most.

A paper grocery bag offers nearly as much convenience while still providing some airflow, but dwellers in humid areas have lost mushrooms to mold and rot in paper bags, too.

Another measure of convenience is whether the container leaves the hands free. Baskets generally don’t, but a single-strap backpack, the kind that can be worn with the bag in front, is excellent for two-handed foraging, not to mention for climbing trees after choice mushrooms.

Using an ordinary backpack or bag—something with uses besides mushroom hunting—is convenient, but for some there is another reason for such a choice: secrecy. Simply put, mushroom hunters don’t like to let other people know they’re going hunting, lest they be followed by the competition.

Such a desire for secrecy is not necessarily an outgrowth of greed; it may sometimes be a necessary part of conservation. While harvesting mushrooms doesn’t kill the underlying mycelium, harvesting all the mushrooms all the time does prevent the mycelium from breeding. Plus, some choice mushrooms grow in places that could be damaged by trampling from too many people—and some good hunting areas are on private land. The owner may have given permission for some mycophiles to harvest, but that doesn’t mean everybody packing a mushroom knife in the whole state is welcome!

Stealth mushrooming requires a bag that not only hides the harvest, but also looks like a normal thing to carry, so as not to prompt too many questions or stick in anybody’s memory. A day-pack does nicely, especially if it has extra pockets for carrying bug spray, a first-aid kit, and whatever else is useful to have in the field.

If the objective is to collect high-quality food, then any container that threatens quality is the wrong one. That means no plastic, and probably not any bag at all, since mushrooms are fragile and break easily if jostled around. Good airflow and sturdy sides are a must. A basket works well for small harvests, but for large harvests a big bucket with plenty of air holes  is a better bet. Strap the Bucket to a frame pack to carry long distances.

A collector whose primary interest in mushrooms is for the cooking pot (or for sale for other people’s cooking pots) can handle a little breakage, but must be able to carry a relatively large amount of each species. In contrast, someone whose primary interest is scientific or artistic (making spore prints, say) really needs to avoid breakage entirely, lest characteristics important for study be lost. A large harvest, on the other hand, is less important. The best option here might be a wide, shallow basket so that the mushrooms can spread out, without jostling each other or resting on top of each other.

Many collectors prefer a mesh bag or a bucket with a mesh bottom based on the idea that the already-collected mushrooms will release their spores along the way, and the spores will fall through the mesh and propagate the mushrooms, just as if they had not been harvested. Such thinking is part of an admirable conservation ethic, the idea that the mycophile should do no harm while enjoying mushrooms.

Unfortunately, in most cases it probably doesn’t work. If the mushrooms in the bag or the bucket were producing enough spores to fall out in quantity while the forager walks back to the car, then the inside of the bag and all the mushrooms in it would end up visibly dusty with spores—after all, spores stick to surfaces, that’s why spore prints are possible. And yet accounts of mushroom foraging never seem to mention messy spore-dust all over the place. And microscopic spore characteristics are often an important part of mushroom identification, but guide books don’t advise mushroom hunters to protect mushrooms from contamination from the spores of other species brought home in the same bag, implying that the mushrooms are not dusting each other even invisibly. Generally, getting a good spore print requires 12 to 24 hours, far more time than most mushrooms spent riding back to the car in a bag.

Propagation through a mesh bag may be possible, especially for the more productive species, but it’s probably minimal. The best reason for carrying mushrooms in mesh is to ensure good airflow.

Some mushroom baskets are lovely works of art. Some collectors enjoy making their own baskets. Why not mix a fondness for basketry with a fondness for mushrooms?

It’s hard to say any mushroom container is “best,” given that everybody has their own individual favorites, but a brief survey of some well-regarded options should set the bar high. Bear in mind that this list does not include used shopping bags, buckets with holes punched in them, milk jugs with the top cut open and a belt threaded through the handle for hands-free carrying, or any number of other DIY options, some of which are regarded as “best” by their proponents. 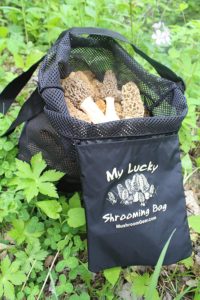 This durable mesh shoulder bag is specifically designed for mushroom hunting, as the name implies. It offers hands-free use, is comfortable to wear, and won’t rip if it snags on the undergrowth. The whole bag and its straps stuff neatly into an attached pouch for storage, and the pouch doubles as an extra pocket. The only problem is that foragers interested in secrecy won’t appreciate having “My Lucky Shrooming Bag” written in big, bold letters on the outside! 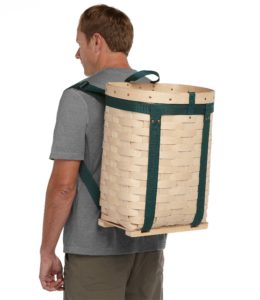 This is the original rigid frame backpack, the kind of thing backpackers wore a hundred years ago. It’s a large, open-top basket with shoulder straps, a comfortable way to carry big (though not excessively heavy) loads long distances. It’s sold primarily for ice fishing, but it’s popular among mushroom foragers as well, ideal for carrying large harvests back from remote locations. It arrives unfinished, so the user will have to waterproof it at home. 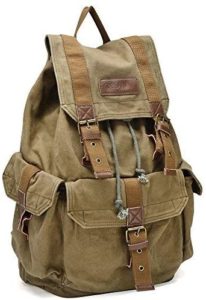 An excellent, all-purpose daypack. The canvass is durable, easy to repair, and doesn’t show dirt. There are no zippers to snag and stick, and the multiple pouches and pockets make it easy to carry a knife, a field guide or two, a water bottle, lunch, and anything else a forager might want in addition to mushrooms. Excellent from a secrecy perspective as well, and even a little water-resistant (mushrooms should never be allowed to get wet after harvest), but airflow is not excellent. Mushrooms should not stay in here long-term. 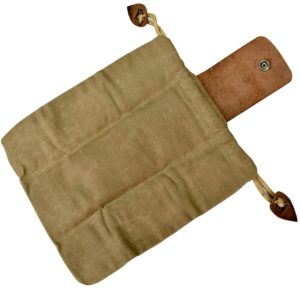 Basically a detachable pocket, this bag hangs off a belt and folds up into an unobtrusive little box shape when not in use. Durable, simple, and just a bit bigger than a cargo pocket. The pouch is too small for big harvests, but it’s a perfect bag to carry just in case a few mushrooms turn up on a hike, and it doesn’t occupy the hands. Besides convenience, the pouch offers good secrecy on the way into the woods—just not on the way out full of mushrooms. 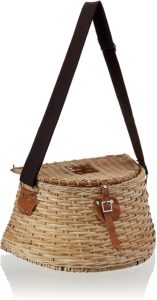 Hand-woven baskets make a lovely and functional addition to a foraging trip. Not only that they are fashionable with a strap that goes over your shoulder.  It is tightly woven (not an open mesh), with a strap, and it is at least as wide as it is deep. If the harvest is small, the wide baskets let the mushrooms spread out, but they can carry large harvests, too. This basket is hands-free and can be great for longer distances, but they are neither secretive nor easy to store when not in use. However; they do a good job of protecting either the harvest or the specimens. Anyway, they are gorgeous.