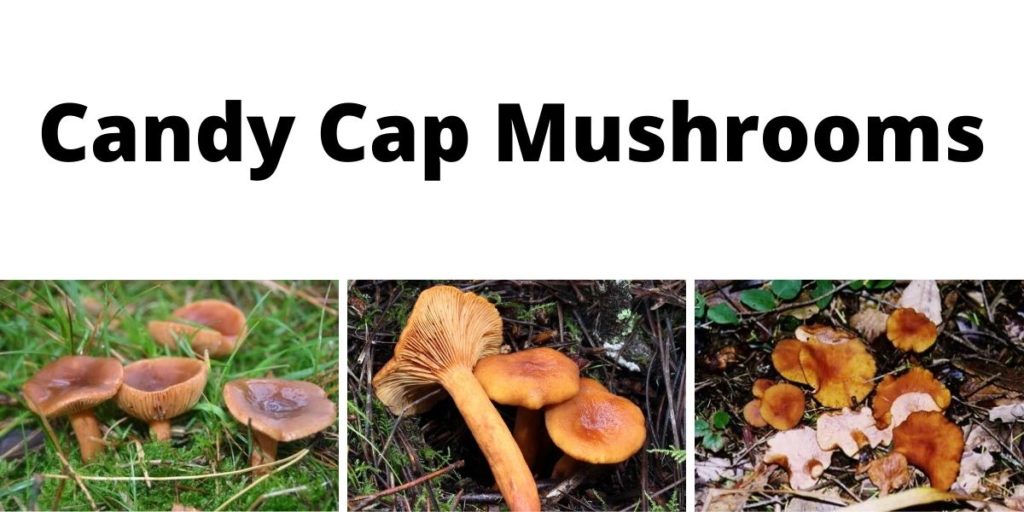 Candy cap mushrooms are small to medium-sized fragile mushrooms known for their aromatic properties and frequently used in cuisine for flavoring rather than as an item of sustenance. Candy caps have a latex that resembles very watery milk; this does not change the color of the flesh and does not change color even when exposed to air. Candy caps are often used in dried forms, and when re-hydrated, produce a sweet liquid that can be used in pancakes, waffles, cookies, and bread. Candy cap also compliments many savory dishes such as fish and pork, in particular smoked dishes. Due to their versatility, they are a favorite mushroom among chefs. On the downside, it is quite laborious to collect sufficient quantities of these fragrant mushrooms.

There are different Candy caps, but the three that are most referred to for their sweetness are Lactarius fragilis, Lactarius camphoratus and Lactarius rubidus. Lactarius camphoratus, is not nearly as strong in flavor; some suggest it is a good substitute, but others argue that once you have experienced the ‘real thing’ of Lactarius rubidus you would not go back. All three of these Candy cap species are found in North America, more Candy Caps may be revealed in the future. Lactarius rufulus is another contender for the Candy cap, but this is not agreed by all due to earlier reports of the flavor being subacrid and lack of the maple-like aroma. It is also a larger species of the ‘Candy cap’ which tends to have a redder caps and is found only under oak trees.

These mushrooms are primarily known for their odor, and the chemical that causes this scent was identified in 2012 by William Wood, from extracts of Lactarius rubidus. The compound was identified as quabalactone III. When Lactarius rubidus dries quabalactone III hydrolyzes and becomes sotolon, the smell is even more potent, and this is what gives maple syrup and curry their scent. The smell is so strong that they are reported to leave their scent in a large room for several days. 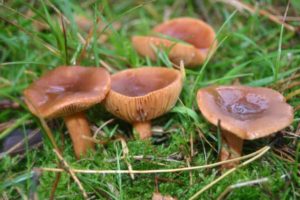 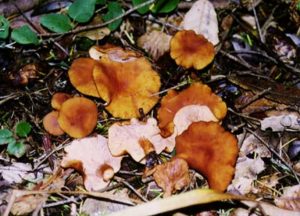 Lactarius fragilis is a lighter color than its fellow Candy caps, appearing reddish-brown to a light brown with yellow tones on its gills. Lactarius fragilis is found in Northeastern America. The maple-like smell is strong even when fresh, becoming stronger when dried. Grows up to 4cm in diameter, and up to 6cm tall like Lactarius camphoratus. 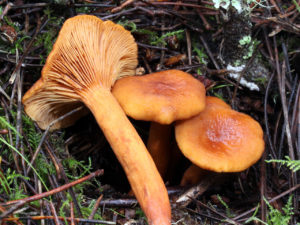 Lactarius rubidus is an attractive mushroom colored burnt orange and frequently seen growing on rotting conifer wood. Found in Northwestern America and also in California among conifer and oak trees. The maple-like smell of Lactarius rubidus is strong, but only when dried, not fresh, this may cause confusion during identification. Lactarius rubidus can become slighter larger than its fellow Candy caps growing up to 8cm in diameter and up to 7cm tall. It also has orange tones on its gills.

Cap: Small, usually less than 5cm diameter. Cinnamon; a burnt shade of orange or a reddish-brown color; color may be darker towards the center. When the flesh is broken a watery liquid leaks out – the latex is like thin milk; the latex never changes color. Margins wavy and thin. Cap is convex when immature, becoming flattened. Cap may be bumpy and wrinkled with a central dent. Usually a small papilla at the center of the cap. Never glossy, but when fresh its texture is dry or moist.
Gills: Adnate to decurrent.
Stem: Slender and smooth but hairy at the base; fragile; solid or hollow, but always ‘snaps’ unless rotten.
Smell: Unique sweet smell. Powerful and long-lasting.
Taste: When cooked or dried maple syrup-like; some suggest caramel; curry; butterscotch or burnt sugar. Some reports of bitterness, but others argue that it is not a Candy cap if it tastes bitter or acrid.
Spores: Round or ovular.
Spore color: White to pale yellow.
Edibility: Edible, not recommended raw.
Habitat: Moss or rotting debris beneath conifers or hardwoods; found along trails and beside the road. Can be scattered in groups or gregarious. Native to the Pacific Northwest and abundant in the San Francisco area.
Season: Fresh mushrooms available from mid to late Winter. Dried can be sourced all year.

The Galerina mushrooms are little brown mushrooms that must not be confused with Candys caps because Galerina marginata is deadly; it has a rusty brown spore print when compared to the white or pale yellow spore print of Candy caps. Candy caps can be identified from other types of little brown mushrooms by their stipe, which is brittle and snaps off rather than being flexible. For this reason it recommended that the Candy caps are gathered by hand and broken at the stem. The brittleness is caused by cells called sphaerocysts, which are specific to Lactarius. Another defining feature is the milky latex produced by the Candy cap, which remains white even when oxidized.

There is insufficient evidence for the Candy cap mushrooms being anything more, that a delight in cuisine. Mushrooms are nutritious, and by virtue, the nutritional value of Candy cap could be considered.

There is no clear indication of the appropriate dosage for the Candy cap mushrooms. When trying something for the first time, caution should be taken to ensure that an allergic reaction will not take place. Start with small doses and increase according to taste and lack of any reaction.

Candy caps, as described in this article, are edible mushrooms and not thought to be toxic. It is essential to make sure that Candy caps are correctly identified if they have been picked during foraging, as previously described, Candy caps are fragile, and you should be able to break the stem, like a piece of chalk, would break.