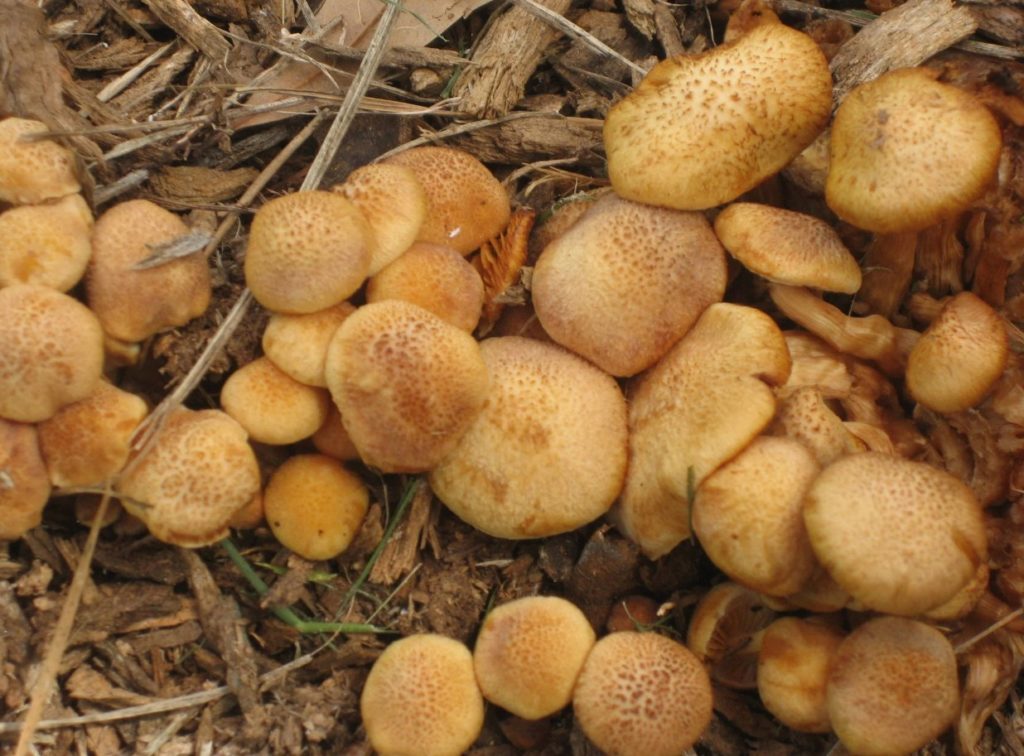 Gymnopilus aeruginosus belongs to a family of ‘magic mushrooms’, the term magic mushroom is given to a variety of psychedelic fungi – there are over 100 different species. These types of mushrooms are used as a recreational drug.  The effects arise because prodrug psilocybin in Gymnopilus aeruginosus is metabolized to psilocin. Psilocin exerts the mind-altering effects on the brain where it competes with serotonin, a neurotransmitter in the brain. Serotonin is a mood-enhancing neurotransmitter, and psilocin can bind to its receptor.

Hallucinogenic mushrooms have been used to alter a state of consciousness since ancient times for healing ritual and religious ceremonies. Both the Maya and Aztec people used magic mushrooms to become intoxicated, and there is archaeological evidence for the use of magic mushrooms, dating back to even 3000 BC. Currently, within these communities, local shamans and healers are still known to use magic mushrooms. The ingestion of these mushrooms results in people seeing altered images and feeling a variety of sensations that are not real. Some describe the feeling of a very spiritual experience and the presence of ‘spiritual energy.’

Cap: Convex. 2 to 15 cm in diameter. Pumpkin or golden yellow colored cap; may have patches of other colors such as pink. Flesh yellow.
Gills: Not free; crowded.
Stem: 5 to 2 cm tall; up to 1.5cm wide. Partial fibrillose veil on the stalk. Pumpkin or golden yellow colored, becoming yellow or pinkish when dried. Flesh off white with blue or green tinges. Solid when young becoming hollow with age.
Smell: Mild or oily.
Taste: Bitter.
Spores: Elliptical; rough. Absence of germ pore.
Spore color: Rusty, orange.
Edibility: Psychoactive.
Habitat: Grows gregariously or cespitose (with entangled rootstocks or stems). Found on dead wood or wood chip mulch; hardwood or conifers. Grows in the Pacific Northwest and Southern America such as Tennessee and Georgia; found in Asia – Japan and Korea.
Season: Grows in Spring, Fall and Winter.
Ecology: Saprotrophic.

Psilocybin is found in Gymnopilus aeruginosus [1.] which explains why is it proposed to be a magic mushroom. This is because psilocybin, the major active ingredient in hallucinogenic mushrooms, becomes a metabolite called psilocin. Psilocin can rapidly cross the blood-brain barrier, where it produces hallucinogenic effects, similar to LSD. Psilocybin and psilocin were first isolated by Albert Hofman in the 1950s, and he marketed it for basic psychopharmacological and therapeutic research. Due to the rapid rise in the use of psilocybin-containing mushrooms in the 1960s, it was classified as a schedule 1 drug, and this saw the research diminish. Psilocybin has potential therapeutic effects, so it’s plausible to think that Gymnopilus aeruginosus might as well.

Magic mushrooms are eaten either raw, dried or cooked with food. It is suggested that over 15mg of psilocybin is necessary to exert is psychedelic effects. This will produce psilocin plasma levels of 4-6ng/ml. Effects will be observed approximately 20 to 40 minutes following ingestion of the magic mushroom and will peak at 60 to 90 minutes. Overall the duration of the experience is 4 to 6 hours post oral ingestion, sometimes 8 hours. There should be no obvious effects by 24 hours post-ingestion [3.].

Popular methods of consumption for Gymnopilus Aeruginosus include Lemon Tek and Shroom Tea.

Side effects may include altered mental state, sickness and sweating. Some report headaches after the psychedelic effects have worn off. Psilocybin may increase blood pressure; therefore, those at risk from cardiovascular problems should not self-administer Gymnopilus aeruginosus. It is not unheard of for persons to die following magic mushrooms, one such example includes a person who died 6 to 8 hours following ingestion of magic mushrooms, and at that time, their blood plasma levels of psilocin were 4000ng/ml. It is essential to confer with a professional mycologist before self-administering any form of magic mushroom, there are species that look like magic mushrooms, but they are in fact very toxic or even deadly.