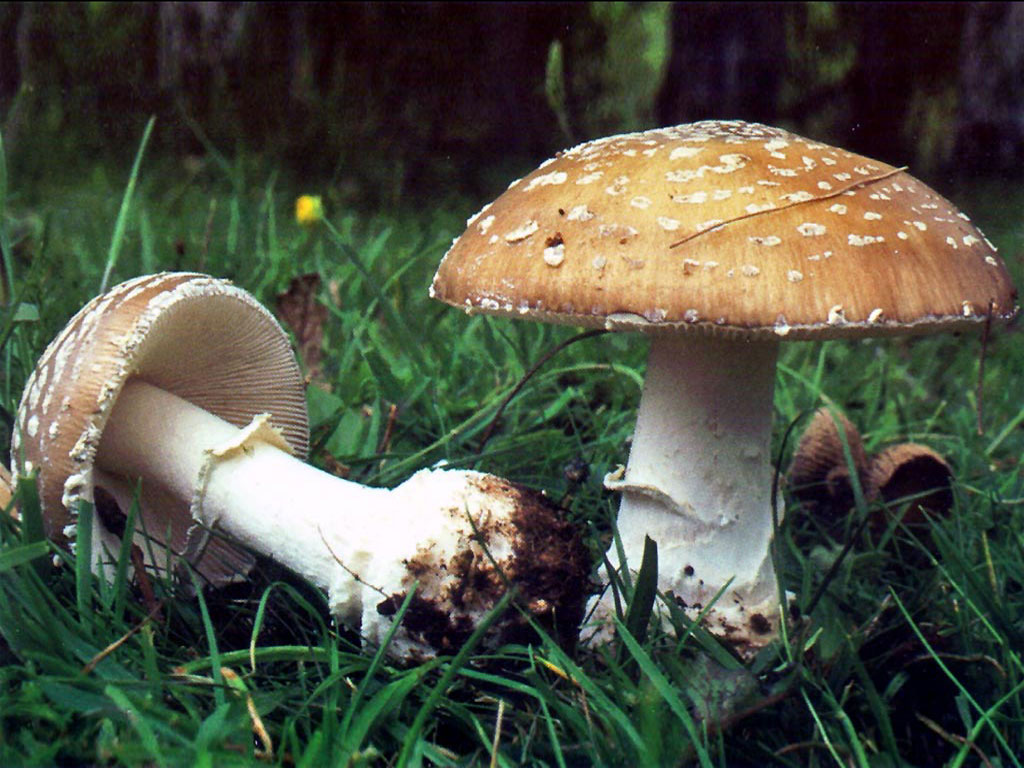 The Amanita pantherina mushroom most commonly known as Panther Cap. It is a stunning mushroom to look at in its natural habitat, but it is poisonous. The cap is ochre-brown with the remnants of the veil forming pure white patches on the cap. This brown and white spotted appearance is what gives this mushroom its name pantherina, resembling the coat markings of the panther.

The Amanita pantherina is commonly found in southern Europe and West Asia. It has also been reported in South Africa and Vancouver Island, Canada, and it is thought these new locations were due to the importation of trees from Europe.

Much like family member Amanita muscaria, this mushroom produces toxins, these toxins are poisonous and may prove deadly. The Amanita muscaria has a red cap and also induces poisoning if ingested.These toxins, also known as psychoactive compounds, consist of:  ibotenic acid and muscimol in addition to muscarine and muscazone. The concentration of these toxins will vary and are often not sufficient to induce psychoactive effects. The Amanita pantherina does not fall into the category of magic mushrooms as it does not have psychoactive compound psilocybin; although it is frequently called a magic mushroom.

Muscimol (also known as pantherina) acts on specific receptors in the brain to produce its sedative-hypnotic and depressant effects. It went into clinical trials, phase 1, for epilepsy; however, the trial was discontinued. The decarboxylation of compound muscarine, mostly achieved by drying, produces muscimole, which is considered the non-toxic psychoactive compound [1.] others report that muscimole is toxic. The psychoactive dose of muscimol for an average person is reported to be 10-15mg although, this has not been scientifically verified. All parts of the fruiting body of Amanita pantherina are considered poisonous.

The Amanita pantherina has a well-established history of use for spiritual, religious, and recreational use among Siberian, European, and Pan-American Shamans. The mushroom is also implicated in mysteries of the ancient Greeks – in particular, The Mysteries of Dionysus and in Rome – in the Mithraic Mysteries [1.].

Cap: 5 to 12 cm in diameter. Dome-like, to convex and flattening with age. Medium ochre-brown with white warts; hazelnut brown. Sticky and shiny when wet. The color of the cap is medium ochre-brown, but there are reports of pale ochre and very dark brown caps. Flesh is white. Fine striations on margin.
Gills: Free of the stem and crowded; white becoming off white or grey with age. 7-10mm broad.
Stem: Pure white; 6 to 12 cm tall. White ring, smooth above the ring. Ring starts thick and chunky but becomes thin and floppy with age. Has a volva which is easily broken – volva can be present as one or two rings; woolly and white to grey. Becomes hollow with age. Wider at the base. No striations or lines.
Smell: Described as not distinctive; like radish or raw potatoes
Taste: Not described.
Spores: Smooth; ellipsoidal to ovoid.
Spore color: White.
Edibility: Poisonous
Habitat: Symbiotic with mostly hardwood trees, often found under beech or oak trees. Sometimes found in fair rings. Can be abundant or scattered. Summer to Fall.

Amanita excelsa is a false Panther cap but very similar to Amanita pantherina. Amanita excelsa is more common, and the veil fragments are grey, not white. Some Amanita rubescens, also known as ‘Blusher’ have a brown cap but the flesh when damaged will always turn red or pink; Amanita pantherina has a white stem that is unchanged when damaged and is so called the false Blusher.

The use of Amanita pantherina for human consumption is not condoned and may also be illegal. However, there are detailed reports of users of Amanita pantherina and their personal experiences. It is suggested that the psychoactive experience specifically expands or alters, space, and time awareness, either speeding up or slowing down time and movement, a dream-like state is reported and out of body experiences. Motor skills are altered; this can cause involuntary muscle movement in addition to clumsy behavior and dizziness. User have made tea with 1g to act as a natural sedative and analgesic and use it for several nights. Some have noticed a reverse tolerance effect – where a lesser dose of a drug can produce the same effect as a higher dose. Some described experiencing extreme ‘euphoria,’ complete alleviation of physical pain, ‘feelings of intense energy,’ and some reported feeling like they were moving around the room very fast – they were not disconcerted by this sensation.

Some users have wanted to make tea and described it as smelling like ‘cat pee.’ Some have used 1.5g of Amanita pantherina in tea and did not feel intoxicated, but they reported a metallic taste in the mouth, headache, and tingling skin.

Many users report feeling more ‘electric’ at the level of the nervous system – one can only surmise that this is not necessarily positive and is a direct result of the fact Amanita pantherina acts on the brain to produce the effects observed.

Amanita pantherina is poisonous and should not be consumed in any way. People consuming this mushroom are taking an extreme risk.

Drying cooking and boiling will not necessarily remove all toxins from Amanita pantherina. The toxins contained in the mushrooms are of variable concentration and therefore, poisoning may occur. There is no safe dosage that has been confirmed by scientific research.

For people who dare try Amanita Pantherina methods of consumption may include Lemon Tek and Shroom Tea.

Five Amanita pantherina mushrooms accidentally eaten by two individuals produced symptoms causing suppression of the central nervous system (CNS), involuntary muscle movements, a hallucination of a religious type, and hyperactivity [2.]. Hyperactivity is reported to be interspersed with periods of sleep. Symptomatic treatment was administered in the hospital, and the poisoning waned. There was no long-term organ damage. Other reports include symptoms within 30 mins, including vomiting, stomach cramps, and a racing heart rate. Acute respiratory failure was the most dangerous of the symptoms observed in Poland, although death is reportedly extremely rare. Symptoms can last appear from 30 to 120 mins post-ingestion and can last up to eight hours. There is no way of predicting a response before taking Amanita pantherina for recreational purposes. Seek medical help if Amanita pantherina has been ingested.