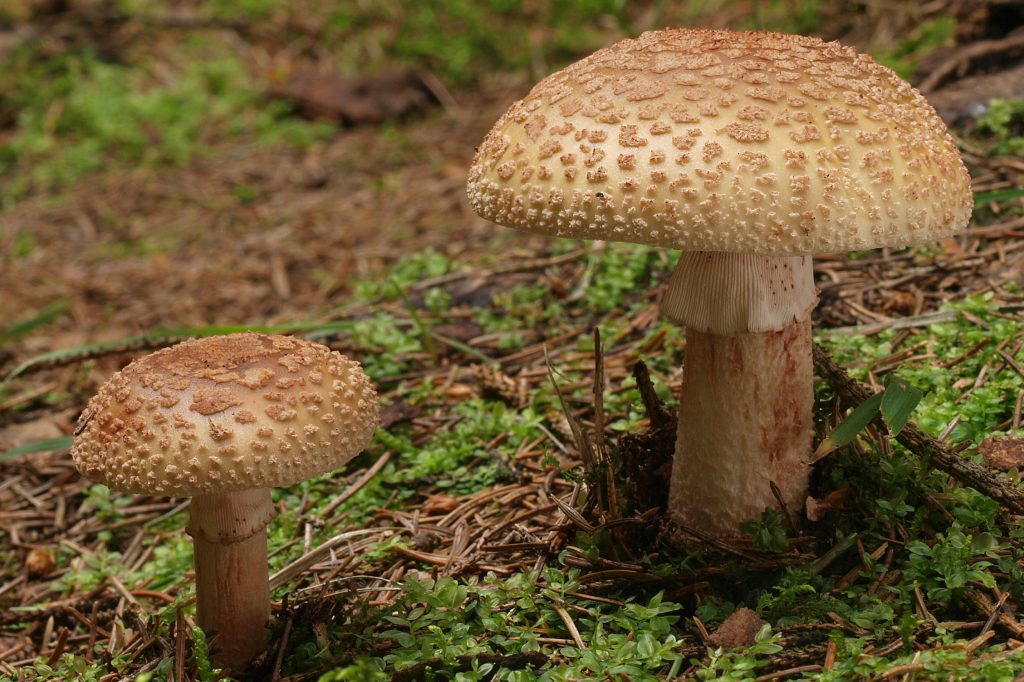 A. rubescens[i][ii][iii] is a European species that probably doesn’t grow in North America—or, if it does, isn’t native (the South African population of this species is almost certainly introduced). And yet, North America is often listed as part of its native range. North America has one or more look-alikes to the European species that were initially assumed to be the same because, well, they look alike. This happens a lot. There are many mushroom once thought to occur in both Europe and North America that actually don’t, leaving one or more previously overlooked American species in need of new names. So far, the American cousins of A. rubescens have not been named or clearly described.

We can simply use the common name, Blusher, to refer to the whole complex.

It’s called The Blusher because it turned red if handled. And it, like jumbo shrimp or baggy tights, is a real-life oxymoron—a safely-edible Amanita.

Cap: Medium to large, becoming flat or convex at maturity, covered with raised warts. Color is highly variable and not a good field-mark for identification, but is generally somewhere from yellow to brown or brownish to reddish. Older specimens are more likely to be at least partially red as something or other will have bruised them. The interior flesh is white, but turns slowly pink upon being cut open. Tunnels dug by feeding worms will also be red or pink.
Stalk: White or, if bruised, pink. Medium length, relative to cap size, may be slightly enlarged at the base. A skirt of tissue around the middle of the stalk is fragile, but usually present. Unlike in many Amanitas, there is no cup of tissue around the base.
Spores: Smooth, oval.
Spore Print: white.
Smell: Nothing distinctive, unless colonized by maggots, as they often are—then the mushrooms smell bad.
Taste: Nothing useful for identification.
Edibility: Not recommended. Safe to eat IF well-cooked.
Habitat: Lives in mycorrhizal partnership with many kinds of trees, both conifers and hardwoods, but most commonly those growing in poor soil. Fruits from the ground, usually in groups.
Range: Members of the blusher complex are found throughout Europe, North America, and in South Africa. Exactly what the ranges of the individual species within the group are is not yet known.

Please note that Blushers are extremely variable in both size and cap color—color, particularly, can be almost anything. Consistent field marks—those that don’t vary and are useful for identification—are the absence of a volva (cup of tissue at the base of the stem), bruising red (if it doesn’t bruise, or doesn’t bruise either red or pink, it’s not a blusher), and the red color of any damage from tunneling worms or maggots.

Like other Amanitas, the blusher also changes significantly as it ages. In the early button stage, it is a round ball. Then the stem elongates and the cap begins to open like an umbrella. The felt-like warts are yellowish and nearly continuous in the button stage, but as the cap expands, the warts get farther and farther apart and turn pinkish, grayish, or tan. They can also fall off; wartless specimens aren’t uncommon.

Since the blusher is a complex of species, the closest look-alike of any Blusher is other Blushers, but several other Amanitas American or European, could be confused with the blusher, too, including some that are dangerous to eat. The others do not usually blush, though. The most notable lookalike of A. rubescens is the Panther Cap Amanita Pantherina

The name “Blusher” is also applied to one or more other species, the yellow blushers. As the name implies, they are not usually the same color.

The Blusher is edible IF it has been well-cooked—but not otherwise. It reportedly has a mild, mushroomy flavor—not bad, but not choice, either. Most experts recommend not eating blushers because they closely resemble poisonous species, and because they are dangerous themselves if not properly cooked. Perhaps as a result, nutritional information for this species is not available. The blusher is not known, nor even suspected, of having any medicinal value, either. For humans, its chief benefit is the enjoyment of its taste when fried in butter.

Or that could be just the enjoyment of the taste of butter, it’s hard to be sure.

The various plants this fungus partners with find it very useful, however, especially the conifers, as conifers (and some groups of flowering plants) can’t survive without a fungal partner of some kind.

The Blusher is, indeed, poisonous in its raw state—or, at least the European species contains a toxin that destroys red blood cells. Whether the American Blusher contains the same toxin is not known[iv]. In fact, it is difficult to find information on exactly what happens to a human who eats a raw blusher. Presumably ingestion of this type of toxin causes some degree of anemia, but actual poisoning cases seem to be rare.

The toxin is destroyed by proper cooking.