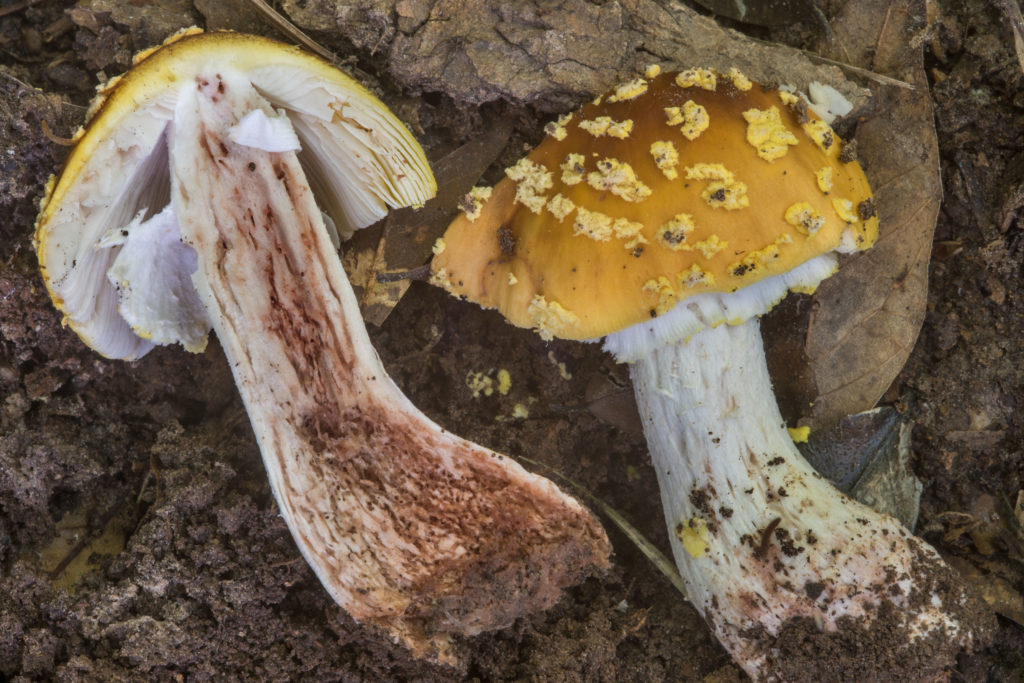 The descriptively-named yellow American blusher[i] is the subject of ongoing taxonomic debate. The issue is that two very similar species, Amanita flavorubens and Amanita flavorubescens, might actually be the same, in which case the older name, A. flavorubens, should apply to both—except that “A. flavorubens” has itself been challenged as possibly invalid.

Perhaps it is better to just call it the yellow blusher.

The blushers are a subgroup of the genus, Amanita, which is famous for its hallucinogenic members and its dangerously toxic members. Blushers are neither, though some are mildly toxic. At least some are edible, though many foragers prefer not to risk eating any amanita, for fear of the consequences of misidentification.

The species is not used medicinally.

Cap:  Medium to large, becoming almost flat-topped with age, yellow to brownish-yellow with yellow “warts.” Bruises reddish. The interior flesh is white or yellowish and stains reddish.
Gills: White, densely arranged, either not attached or very slightly attached to the stem.
Stem: Medium-size, whitish to pale yellow. The “skirt”  of tissue halfway up may be yellower than the rest. There may, or may not, be pieces of broken, yellow tissue on the base of the stem or near it on the soil. Bruises reddish.
Smell: Nothing distinctive for identification.
Taste: Nothing distinctive for identification.
Spores: Ellipsoid, smooth.
Spore color:  White.
Edibility: Possibly edible with extreme caution.
Habitat: Lives in mycorrhizal partnership with living trees, especially oaks and other hardwoods, but may be able to partner with conifers as well. Sometimes partners with urban trees. Fruits from the ground either singly or in groups.

Discussing the anatomy of amanitas is easier if one bears in mind the way these mushrooms grow. A young amanita starts out enclosed in an “egg” of tissue, the universal veil. This breaks as the mushroom grows and the stem lengthens. The warty spots of the top of the cap and the tissue around the base of the stem (which in some species forms a cup) are remnants of the universal veil. A second veil of tissue extends from the edge of the cap across the gills to the stem. This, too, breaks as the mushroom grows, leaving a skirt of tissue partway up the stem.

Blushers, as a group, are distinctive among amanitas in that they blush, bruising or staining reddish when damaged. However, it’s important to realize the color change is subtle and can take several hours. It’s not a dramatic shift.

The American yellow blusher is part of a subgroup of amanitas, the blushers, that are all very similar to each other[ii]. Some can’t be differentiated in the field, though as they tend to have very different ranges, where one finds the mushroom is a good indication of which mushroom it is. However, nearly all of them are brownish or whitish; the American yellow blusher stands out for being yellow (and American).

But all amanitas resemble each other to some degree, and they are variable enough that an odd-looking yellow blusher could look very similar to an odd-looking something else. Some other species do have yellow or yellowish variants. Even blushing (turning reddish when bruised or cut) is not an absolutely reliable mark because there are a few other amanitas, outside of the blusher group, that do it. Some are dangerous.

In general, if a mushroom is an amanita, is growing in eastern North America, is yellow, has a skirt but does not have a cup-like volva, and gradually turns reddish when damaged, it is probably the American yellow blusher.

But don’t bet your life on it.

Some blushers are definitely edible if cooked, though they are reputed to taste rather poor[iii]. It’s difficult to find mycologists that comment on whether the American yellow blusher is edible specifically. It’s also not clear whether anyone has investigated the nutritional profile of the species. It is not used medicinally. It is not hallucinogenic.

The most important benefit of the species is probably ecological, by virtue of its mycorrhizal relationship with trees.

This species is not used medicinally, so there is no dosage.

Although some blushers are edible if cooked (raw, some can cause anemia), and the American yellow blusher may be one of them, so many amanitas are dangerously toxic that many enthusiasts recommend just not eating any amanitas at all, ever.

It comes down to how good someone is at identifying mushrooms and how much risk they are comfortable taking.