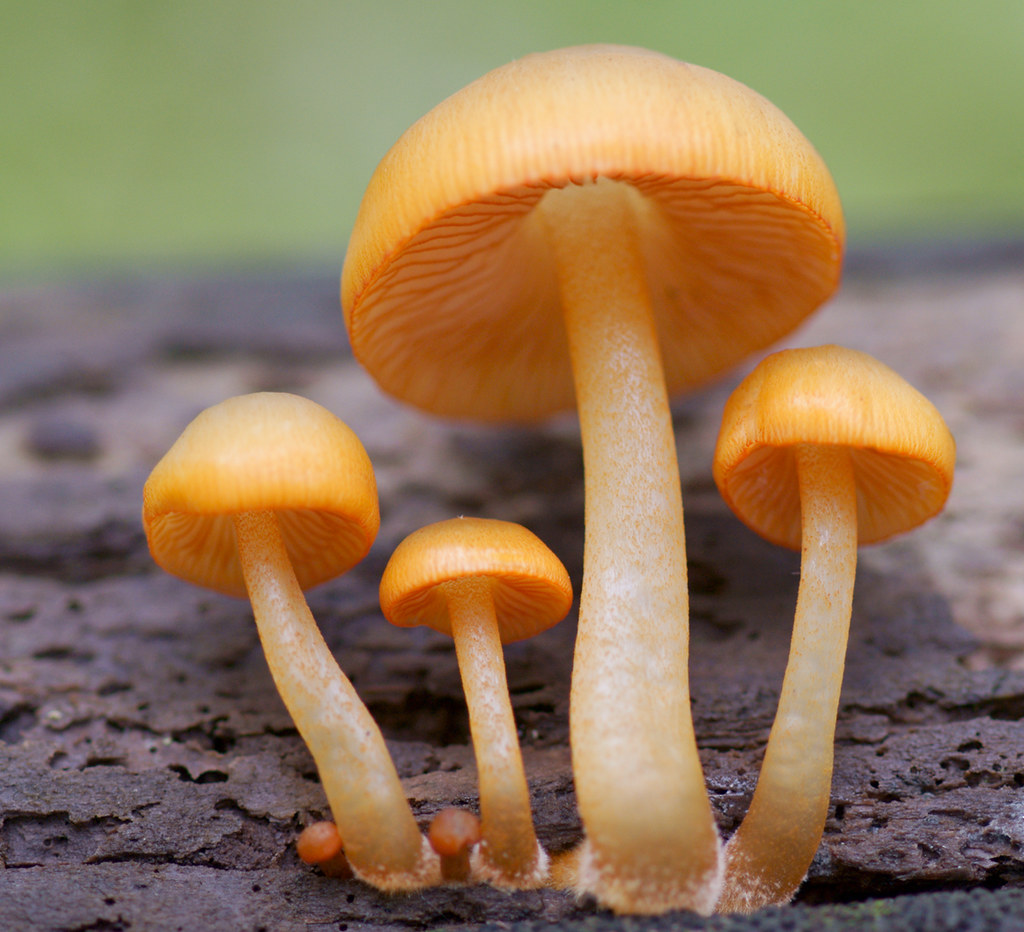 Mycena Leaiana or Lea’s mycena[i] is one of those fungi with no known use except to be its fungal self. It is pretty, a bright little patch of color, and it could conceivably be confused with at least one edible species. Curiously, “Lea” does not refer to a woman. It is the last name of a man, Thomas Gibson Lea, who collected this and several other then-undescribed species and sent them to an expert for study. He died not long afterwards, and this orange mushroom’s name is his memorial.

Cap: Very small, bell-shaped to convex, sticky or slimy when wet. When young, bright orange, but fading with age (or when rained on; the color can literally wash out) until very old specimens are nearly white, sometimes with greenish stains. The interior flesh is pale, sometimes orangish.
Gills: Densely packed, attached to the stem. Although the gills are mostly cream-colored to orangish, the edges are bright orange—the differently-colored edges is a very distinctive field mark for this species, especially as the gill edges remain orange even after the rest of the mushroom has faded.
Stem: Proportionate to the cap, long and thin. Hollow, tough, and orange to orange yellow, but paler near the top. The base is dusty with orange or whitish powder.
Smell: Mild to mealy.
Taste: Mild to mealy.
Spores: Elliptical.
Spore color: White.
Edibility: Unknown.
Habitat: Eats dead hardwood, including woody debris. Usually fruits in clumps, more rarely singly.

One of the best field-marks for this species is one of the hardest to see; the marginated gills, that is, gills whose edges are a different color than the blade[ii]. It’s not that no other mushroom has this feature—even some look-alikes have it. But it’s rare enough that checking the gills is a good way to rule out a lot of impostors.

There are a lot of mushrooms that look at least vaguely like Lea’s mycena, but a close look will usually make the difference clear. Because this is not a species people eat, mistaking another species for Lea’s mycena is not a disaster in most cases. However, the opposite mistake, misidentifying Lea’s mycena as something else, could be a problem, since it has at least two look-alikes someone might pick and eat.

The enoki mushroom (Flammunlina velutipes) is familiar to many as a dense cluster of narrow, white, pin-headed sprouts sold in Asian groceries, but it only looks like that because it is grown with little air or light. Growing wild, the enoki is small, orangish brown, and has a more traditionally proportioned cap. In short, it is an edible wild mushroom that bears at least a passing resemblance to Lea’s mycena, whose edibility is unknown. When in doubt, check the gills and the base of the stem; enoki gills are the same color all over, including the edges, and when wild-grown enokis have black stem bases.

The bluing mycena is very similar to Lea’s mycena except that, as the name implies, it is blue when young, not orange. However, both species fade in color with age, and could thus be confused. And since the bluing mycena is at least rumored to be halucinogenic (in mentioning the rumor this article makes no comment on whether the rumor is true or whether the mushroom is safe to eat; not all hallucinogens are), meaning somebody might eat some. Check the stem base; some blue should remain there, even in older specimens.

There are a large number of orange or orangish mycenas. Some even have marginated gills. In most cases, a careful look at the overall color (most are less orange) and at where and when the mushroom is growing will be enough to make clear which are not really Lea’s mycena. One of the most common bleeds red when cut, which Lea’s mycena does not. A few may require microscopic examination to disambiguate, though.

Lea’s mycena is not known to be edible, therefore any medicinal or nutritional benefits aren’t known, either.

Since Lea’s mycena is not used medicinally, it has no dosage.

1 thought on “Mycena Leaiana: The Orange Mycena Identification and Info”