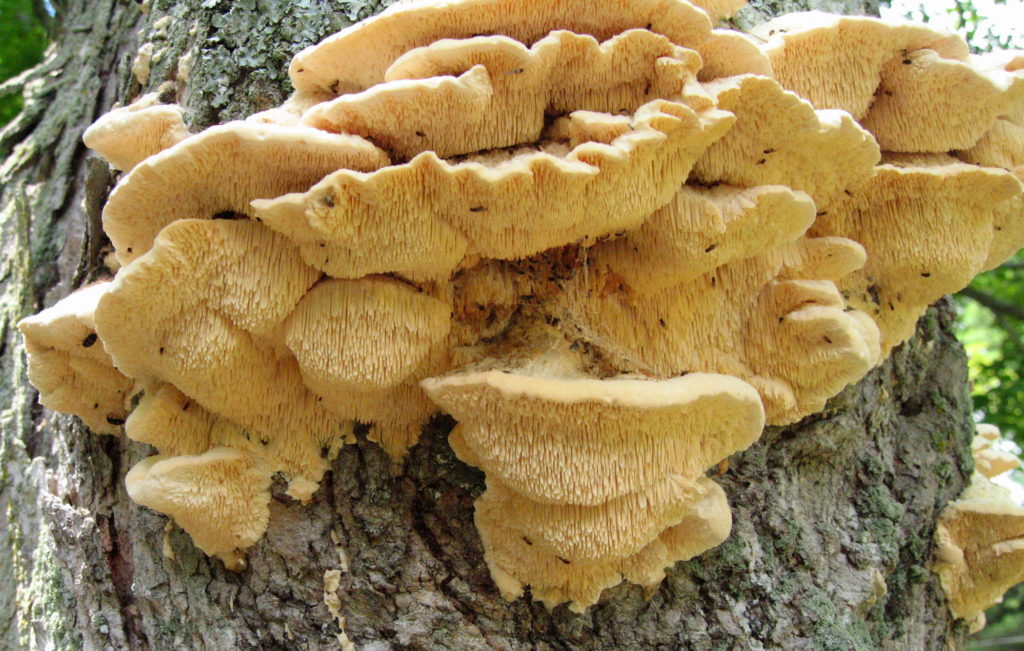 The northern tooth fungus[i] sounds like it ought to be edible, from the name, but the “tooth” actually refers to the tooth-like spines that release spores, not to any suggestion to chew the thing. It’s an interesting fungus, even an attractive fungus, but not an especially useful one from a human perspective. Climacodon septentrionalis is the standard scientific name, though some sources list it as Steccherinum septentrionalis instead.

Cap: Often large, roughly semi-circular, and plate-like, initially whitish but becoming yellow. Very old specimens may be green with algal growth. May be sticky or dry. Hairy or at least rough. Multiple caps grow from the same base plate in a dense clump.
Gills: There are no gills. Instead, the under-surface of the caps have fine, thin “teeth” (rather like the massed bristles of a hairbrush) from which the mushroom releases its spores.
Stem: There is no stem. The caps attach directly to the tree like shelves. However, a base plate of tissue may cover the tree where the clump of caps attaches.
Smell: The scent is not especially distinctive, but it is quite foul in older specimens.
Taste: Initially mild-tasting, but then becoming very bitter.
Spores: Smooth, ellipsoid.
Spore color: White
Edibility: Not palatable.
Habitat: The fungus eats the heartwood of living hardwoods; its favorites are green ash, sugar maple, and beech. While the fungus does not kill trees directly, by hollowing out the heartwood it does make the trees more likely to snap in windstorms. The fungus fruits from a wound on the trunk, often far from the ground.

The teeth are short and grow only on the under-side of the cap, meaning they aren’t visible except on close inspection. The fruiting bodies can persist for several weeks. The fungus enters the tree through wounds and often fruits from wounds. Because it does not attack any tissue except the heartwood, trees show no symptoms of being infected except for the occasional presence of the fruiting bodies—and, eventually, hollowness.

From a distance, northern tooth can resemble some oyster mushrooms or some polypores, since it has semi-circular fruiting bodies growing out of a tree[ii]. However, the combination of this growth form with teeth is highly unusual. Northern tooth is unlikely to be mistaken for anything else on close examination.

Northern tooth is interesting-looking, and hollow trees can have significant habitat value for wildlife. But it’s considered too awful-tasting to eat, and while it contains some substances that could have value as antioxidants[iii], it is not used medicinally.

Northern tooth is not used as medicine, therefor has no dosage.

Northern tooth is not toxic, however there is no reason for anyone to eat it as it tastes terrible.