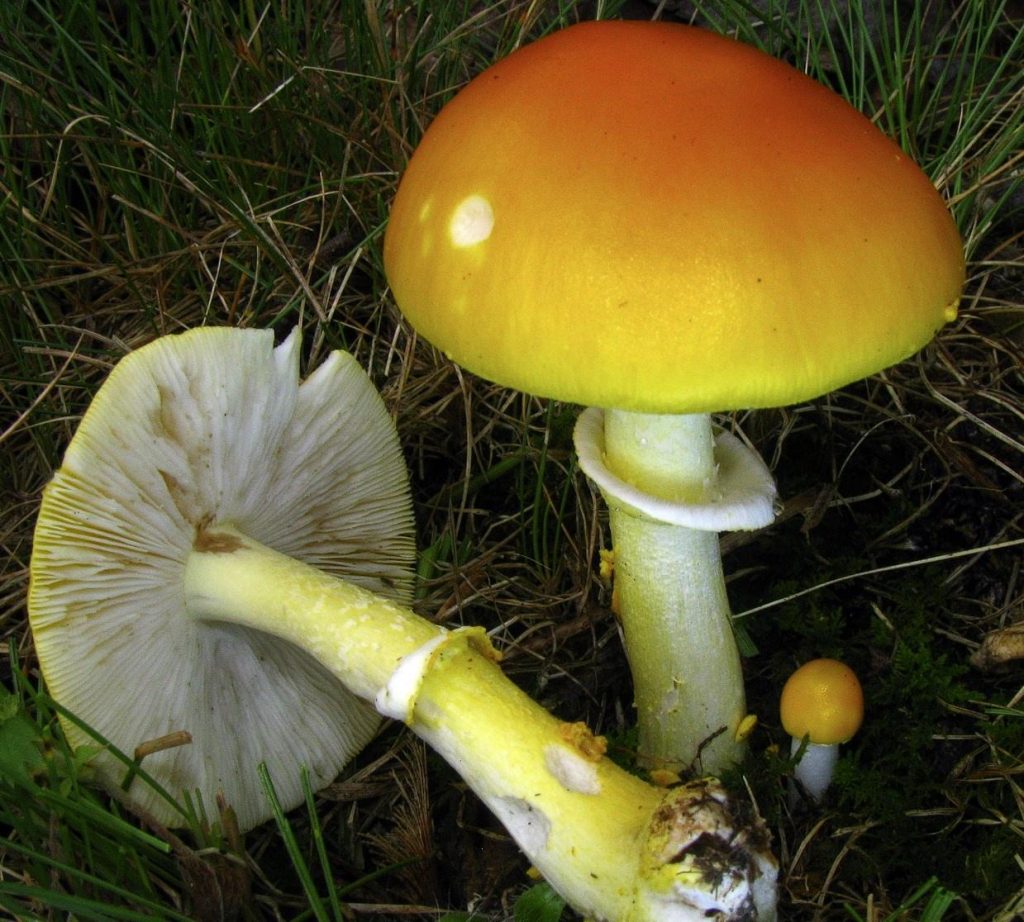 Amanita flavoconia’s most aptly-descriptive common name might by orange amanita, but it’s also called yellow patches, yellow wart, and yellow-dust amanita. It is indeed an orange mushroom with yellow, wart-like patches and yellow dust. Perhaps its most secure claim to fame is that it is pretty, for this little, brightly-colored mushroom has no known uses and has not been researched very much yet. Perhaps when more research is done we will discover that this species is healthy to eat, medicinal, psychoactive—or else thrillingly dangerous, as some of its relatives are (ever sat and stared at a mushroom that could kill you if you ate it?  It’s a strangely enjoyable experience, perhaps in the same way that watching a horror movie is. Of course, just watching a toxic mushroom is as safe as watching a horror movie).

On the other hand, being pretty is enough. Just existing, fulfilling its ecological role and being its mushroomy self is enough.

Cap:  Small to medium-size, orange to orange-yellow, bell-shaped when young, becoming flat or nearly so with age, sticky when wet. May or may not have small, yellowish patches (rather like flecks of dried oatmeal, except for the color) on top. The interior flesh is white.
Gills: White, sometimes with a yellowish powder—this powder is not the spores—and somewhat crowded. Either not attached to the stem or only narrowly attached.
Stem: Proportionate to the cap, long and thin. Pale yellow. There is a yellow skirt of tissue part-way up, but this shrivels fairly quickly and may be gone from older specimens. The base of the stem is slightly enlarged and may be dotted with yellow flecks or powder.
Smell: Not distinctive for ID purposes.
Taste: Not described.
Spores: Ellipsoid, smooth.
Spore color: White, but spore prints may be yellowish because of the powder on the gills.
Edibility: Not known  (and not recommended).
Habitat: Grows in mycorrhizal partnership with a number of tree species,  both hardwoods and conifers. Fruits from the ground near partner trees, either singly or in groups.

Amanitas in general share a very distinctive anatomy during their development. They all start out as an egg-like knot enclosed within a shell of tissue, the universal veil. As the mushroom grows and the stem lengthens, the universal veil breaks, leaving, in most cases, a cup of remnant tissue (the volva) around the base of the stem and small patches of remnant tissue on the top of the cap. There is also a partial veil across the gills from the rim of the cap to the stem. As the cap expands and the stem continues to lengthen, this veil, too, breaks, leaving a remnant “skirt” of tissue around the middle of the stem.

A. flavoconia[i] is not an exception, and it’s possible to find young specimens that have one or both veils intact. However, it is one of several amanitas where the veil remnant at the base of the stem is not a cup but a powder that can easily come off and remain in the soil when the mushroom is picked. The skirt around the stem often shrivels early and is missing from older specimens. The patches on top of the cap can also fall off early and may be missing. So it’s possible to find specimens that don’t look like obvious amanitas at all.

A.flavoconia is part of a complex of very similar species. Casual mycophiles might want to call any member of the group a “flavoconia-like amanita” and leave it at that.

A.flavoconia[ii] is a kind of default species within a group of very similar mushrooms; that is, if it’s not clear which of the group a specimen is, A. flavoconia is a good guess. The others are best described as variations on the flavoconioid theme.

Amanita elongata has a yellow cap, with no hint of orange, and the stem is white—though the powder and flecks from the veil are still yellow.

Amanita flavivolva has a cap that is partly yellow, but the center is grayish and the edge is white. The stem is white and bruises brown.

Amanita erythocephala has a reddish-orange to red cap and a yellow stem. It is a European species whose presence in North America has not been confirmed, but there are North American specimens that look like it—they may be A. erythocephala, or they may belong to a fifth, undescribed flavoconioid.

Amanita frostiana isn’t necessarily included in the flavoconids, but it’s similar enough to have confused experts. Its stem is white.

A.flavoconia has a somewhat looser resemblance to the other orange- or yellow-capped amanitas, especially those with a yellow universal veil (meaning the wartlike patches on the top of the cap are yellow, not white), including some forms of Amanita muscaria. Many of these are larger, and most have a distinct volva. The volva can be broken off, and some of these other species don’t have one, either, but careful attention to detail can still differentiate these mushroom in most cases.

Since most people are not going to try to eat A. flavoconia (see the note on Safety), proper identification is not of pressing concern to most non-specialists. For the merely curious, “probably Amanita flavoconia” is good enough.

But for people looking for Amanita muscaria, the passing resemblance to A. flavoconia and its flavoconioid siblings could be a problem. That’s because A. muscaria is psychoactive—and relatively safe to eat, provided the eater takes all necessary precautions for the seriously mind-altering experience. In contrast, A. flavoconia is not known to be psychoactive and could be toxic.

A.flavoconia may or may not be edible. It probably is not psychoactive, but the matter has not been thoroughly researched yet.

The Amanita genus includes both edible and toxic species, as well as the famous psychoactive species. Perhaps because of an overabundance of caution, or perhaps in an attempt to discourage use of the psychoactives, some guidebooks list all amanitas as toxic, or list the psychoactive species as toxic, so getting a straight answer on whether to eat any amanita can be difficult. With A. flavoconia, the misinformation is complicated by a straight lack of information.

According to online chat fora[iii] on the subject, there are people who have eaten A. flavoconia with no ill effects and no mind-alteration, either. A. flavoconia also may or may not be the same species as a mushroom commonly eaten in Mexico.  However, such stories cannot be regarded as conclusive—see note on safety.

Perhaps the best indication that A. flavoconia may be edible is that there are no confirmed serious illnesses or fatalities from it, despite it being both common and easy to mix up with several edible or psychoactive species; it has almost certainly been eaten by many people accidentally.

But it is impossible to be sure the species is safe, let alone what its nutritional or medicinal value might be.

A.flavoconia is not known to be toxic, but it’s not known not to be toxic, either. It has certainly been eaten without ill effects by some people, but the toxicity of mushrooms can vary a lot, as can individual susceptibility to mushroom toxins (of which there are many different kinds, including some that have not been chemically identified yet and therefor can’t be tested for except by eating). To say for sure that the species is edible, there would have to be many more well-documented cases of people eating properly-identified A. flavoconia in quantity. The fact that this species shares its genus with some of the most dangerous mushrooms in the world is reason enough for some people not to give it the benefit of the doubt.

But perhaps the most serious risk with A. flavoconia is that of misidentification, as the species differs only subtly from several others, some of which could be toxic. The differences from the known toxic amanitas are more obvious (most of the deadly ones are white or whitish), but an unwary forager could still make a deadly mistake. Mixing up A. flavoconia with a known psychoactive species is also a possibility, which could cause serious problems if the eater was not planning to get altered—an unexpected “trip” could prove fatal if, for example, the victim was driving when the effects came on.

More data is needed, as researchers say, but persons wishing to gather data on the edibility of A. flavoconia should exercise extreme caution and should be very sure the mushroom being sampled really is A. flavoconia.