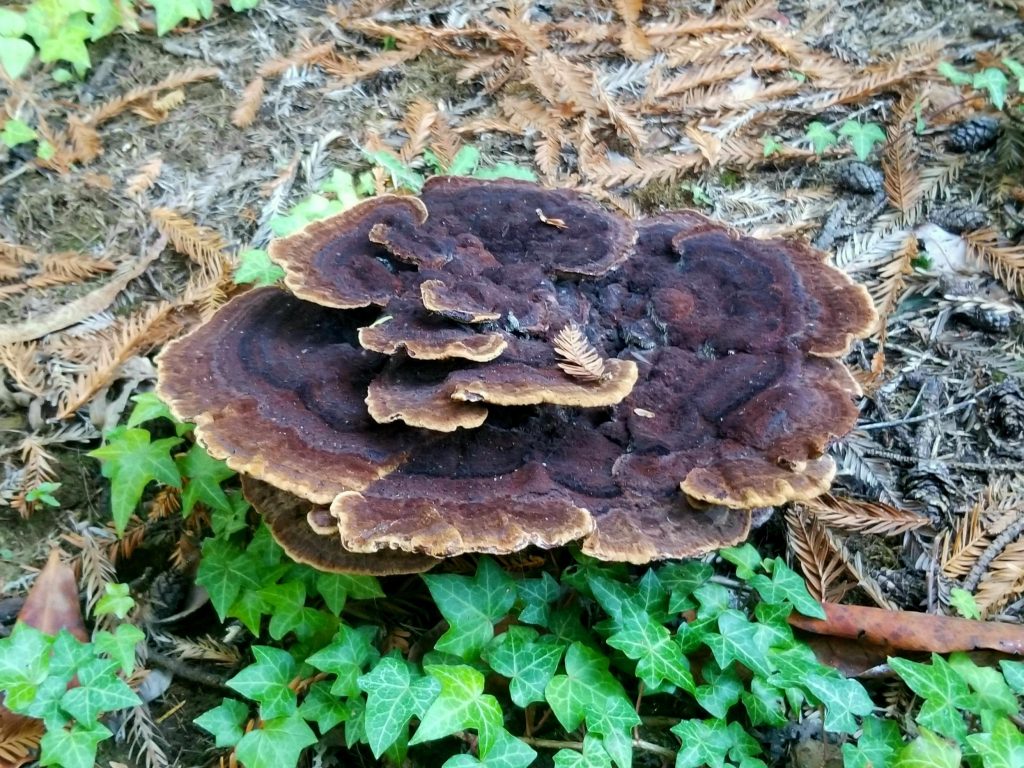 The dyer’s polypore[i] (also known as velvet-top fungus or dyer’s mazegill) is indeed prized by dyers. The species is found across much of the world, including Europe and North America and can be used to dye wool any of several different colors. The fruiting body is annual, not perennial, and lasts only a few weeks. It is not considered edible[ii].

Foresters are also familiar with this species as it attacks living conifers, invading through the roots and causing a “brown rot” of the heartwood of the lower trunk[iii]. Brown rot means that the fungus eats the cellulose of the wood, leaving the brown, crumbly lignin behind (as opposed to white rot, caused by other fungi that eat the lignin and leave the white cellulose). Affected trees are likely to hollow out at the base or even snap. The fungus gives no outwards sign of its presence until it fruits, and does not fruit until after it has done extensive damage to the tree. In each region, the fungus usually has one preferred prey species.

Cap: Medium-sized to large, flat or slightly depressed in the middle, variable in both shape and color. There may be more than one cap per stem.
Gills: There are no gills. The pore surface extends partway down the stem and is also variable in color.
Stem: Short or absent. May be centered under the cap when growing from the ground or on the edge of the cap when growing from a tree trunk.
Smell: Either sweet and fragrant or little scent at all.
Taste: Nothing useful for identification.
Spores: Ellipsoid, smooth.
Spore color: Whitish to yellowish.
Edibility: Not edible.
Habitat: The fungus eats the roots and the heartwood of the lower trunk of living or dead conifers. It usually fruits from the ground near the tree, but can fruit from the lower trunk.

This species shows some individual variation in its fruiting bodies, but identification is also complicated by significant age-related changes. Young mushrooms do not look much like mature mushrooms, and very old mushrooms look different again.

The shape may be circular, semi-circular, or lobed. Several caps may come from the same stem, or there may be just one. There may or may not be a stem, and it may or may not be located centrally under the cap. The cap is usually broad and thin, but not always. Which shapes are typical and which unusual depends largely on whether the mushroom is sprouting from the ground or from the trunk.

The mushrooms begin as fuzzy, yellowish or orangish lumps. As they grow, they develop a more distinctive shape, structure, and color pattern.

In young fruiting bodies, the top of the cap is fuzzy and olive to brown in color—it may have several concentric bands of different colors, light browns, dark browns, yellows, and red-browns. The spore surface, including the edge of the upper cap surface, is whitish, bright orange, or lemon yellow. Most areas of the surface bruise brown when handled, a very distinctive trait. The interior flesh is light brown and relatively soft.

In mature fruiting bodies, the pore surface is greenish yellow or olive. The flesh is reddish brown, becoming tougher.

In old age, the pore surface is brown or even black. The cap surface may have lost all its fuzz. The mushroom can no longer bruise. The internal flesh becomes tough and leathery.

The dyer’s polypore at least vaguely resembles many of the other polypores, though most close look-alikes grow from hardwoods, which dyer’s polypore never does. Old specimens that have lost the distinctive bright colors, fuzziness, and bruising are easiest to misidentify; collectors may need to rely on microscopic characteristics.

Look-alikes to watch out for include[iv]:

Inonotus tomentosus, the woolly velvet polypore, is quite similar and does grow from conifers, but it is smaller and thinner, and its pore surface is never greenish.

Inonotus hispidus, or shaggy bracket, fruits from hardwood trees and never from the ground.

Phellinus gilvus, the mustard-yellow polypore, also grows only from hardwood trees or, occasionally, from their roots. Identification could be an issue where hardwoods and pines grow near each other, so that its not clear which tree’s roots the mushroom is coming from, but the shape of the margin in slightly different from that of dyer’ s polypore.

Laetiporus sulphureus, or chicken-of-the-woods, is yellower and fruits from hardwoods or from yews (which are indeed conifers but do not resemble the pines and Douglas-first dyer’s mushroom favors)[v].

Laetiporus persicinus, or spring chicken / white chicken, can be misidentified as dyer’s mushroom, despite usually having a different “look”, in part because guidebooks often describe the spring chicken wrong. They say it closely resembles its relative, chicken-of-the-woods, when the resemblance is actually somewhat distant. Keying the mushroom out usually yields an identification of dyer’s mushroom instead, because the two share several key characteristics. However, spring chicken only grows on hardwoods.[vi]

Dyer’s polypore is not eaten or used for medicine, but it does make excellent wool dyes[vii]. Although many mushrooms used in dyeing produce pigments that have nothing to do with the color of the living mushroom—some of the brightest, like Amanita muscaria, produce no dye at all, while dull brown Hapalopilus nidulans makes a lovely lilac—the dyer’s polypore actually does produce dyes in the same colors as itself: yellow, yellow-brown, brown, red-brown, and green. But the finished color depends not on finding a piece of mushroom of the right shade but rather on how the dye is processed and which metallic salt is used as a mordant to fix the dye onto the fiber.

Dyer’s polypore is not used medicially, so dosage is not an issue.

Dyer’s polypore is unpalatable; when it is young and tender enough to cut, it is too fuzzy to be appetizing. When it grows out of its extremely fuzzy stage, it can no longer be easily cut. Many sources comment that it “could be” toxic, but it is difficult to find a clear answer on whether it really is. It may be fair to say that dyer’s polypore is not known not to be toxic.