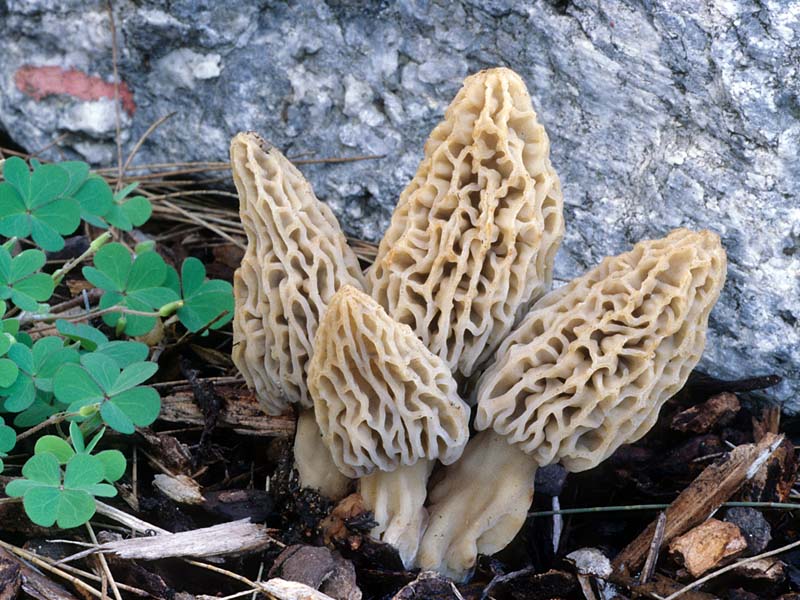 Most morels are almost impossible to identify down to species level in the field because morels are so variable that mushrooms of the same kind are often taken to be completely different species while actual, genetically distinct species often look exactly alike.

The landscaping morel[i] is an exception.

While it does have look-alikes, it’s usually possible for experienced foragers to tell which is which without too much trouble. This species has also developed a very distinctive habitat preference, often growing in landscaping mulch and similar sites, hence its common name.

An incorrect scientific name used in many older books, M. deliciosa, hints at why the landscaping morel is popular.

Besides being good to eat and easy to recognize, the landscaping morel has two other unique claims to fame. First, this is the cultivated morel species–most cannot be cultivated because they depend on relationships with living trees. When R. Ower patented the cultivation process, neither the taxonomy nor the feeding behavior of the group were well-known at the time. That he collected spores from almost the only species that could have worked was a happy accident on the part of the man, R. Ower, who patented the cultivation process—at the time, neither morel taxonomy nor morel feeding behavior were well-known, and the spores Ower collected happened to belong to one of the very few morel species that don’t depend on a mutualistic relationship with living plants (which is why it often grows in mulch, feeding on dead wood). Had he collected almost any other species, cultivation would have been impossible.

The other stand-out detail about the landscaping morel is that genetic evidence shows this is the ancient species from which all other morels descend.

Cap: Very variable in shape, but usually tall, pointed, and twisted, especially when young. The pits in the outer surface of the cap are elongated vertically. When young, the pits are dark and the ridges between them are whitish. As the mushroom matures, both pits and ridges become yellow. Bruises pinkish, orangish, or reddish brown.
Gills: Morels have no gills, nor does the cap even have a true underside, for the mushroom is shaped something like a closed umbrella. The spores are produced in the pits on the outer surface of the cap.
Stem: Short, hollow, sometimes swollen at the base, varying in color, bruising pinkish, orangish, or reddish brown. The cap is fused to the stem for its entire length.
Smell: Nothing useful for ID purposes.
Taste: Nothing useful for ID purposes.
Spores: Smooth, elliptical.
Spore color: Pale or yellowish orange.
Edibility: Considered choice.
Habitat: Usually but not always found in landscaping mulch, planters, roadside verges, and similar sites. Strongly prefers disturbed ground. May be capable of forming mycorhizal relationships, but doesn’t need them; can subsist on dead plant matter alone.

All morels have certain distinctive features in common: the cap encloses the upper part of the stem like a closed umbrella, lacking a distinct underside; the cap is fused to the step for part or all of its length; and the outer surface of the cap is covered with honeycomb-like pits and ridges, not wrinkles. The landscaping morel stands out specifically for its pinkish, orangish, or reddish-brown bruising, something no other morel is known to do. Most (not all) also have an unusual pointed, twisted cap, especially when young.

Among morels, the landscaping morel is relatively large, but not huge.

All morels look somewhat similar to each other and could be mixed up with each other, though the landscaping morel bruises in a way that the others don’t. Fortunately, all morels are considered edible (though see the safety note) so a mix-up would not be a serious problem.

Two other groups of mushrooms resemble morels in a general way, and while neither look like landscaping morels specifically, an incautious forager could conceivably make a mistake—and both these groups do have toxic members.

Early morels closely resemble long-stemmed versions of the true morels, since their caps have the same distinctive shape. However, their caps are wrinkled rather than pitted, their stems are not hollow, and their caps are not fused to the stem but only attached at the top, like the clapper of a bell.

False morels have short stems. Their caps can be morel-like in shape, though some species have very convoluted caps. They, too, have wrinkles rather than pits and stems that are not hollow and not fused to the stem.

Confusion with some older stinkhorns is also possible, once the gleba, or slime layer, has been removed by flies, since their caps are indeed pitted not wrinkled, but stinkhorns are edible, and anyway at least a trace of gleba usually persists.

A careful examination is enough to avoid any of these miss-identifications. Indeed, most people who are poisoned by either early or false morels knew exactly what they were eating; the toxicity of both groups is a matter of debate, and may in fact be highly variable.

Although morels as a group are sometimes claimed to have medicinal benefits, and have biochemical characteristics suggesting they could be used medicinally[ii], they are mostly used as food, not as medicine. There is little if any clinical research on morels as medicine in living patients, and little if any research on the landscaping morel specifically.

Nutritional profiles of the landscaping morel are hard to find, but some other morels are good sources of a number of vitamins and minerals, notably iron and copper[iii]. Like other mushrooms, morels pack a lot of protein into a small, low-calorie package, but one would have to eat a huge amount of the mushrooms for them to become a significant source of protein in the diet—and there is good reason not to eat huge amounts of morels (see the note on safety).

In the end, the most important benefit of morel consumption may simply be pleasure.

Since the landscaping morel is seldom used as medicine, dosage is not relevant.

Although all morels are considered edible, they nonetheless sometimes make people sick. Improperly cooked morels are the usual culprit, though there is a very different form of poisoning that sometimes occurs with even well-cooked mushrooms involving gastrointestinal upset and neurological problems[iv]. It’s not clear why some people get sick and others do not, though the reaction seems more common after large morel meals.

It’s best to use caution, especially when eating morels for the first time—though if the morels themselves vary in toxicity (a real possibility), the fact that someone has eaten lots of morels in the past without incident won’t be proof that the next meal is safe.