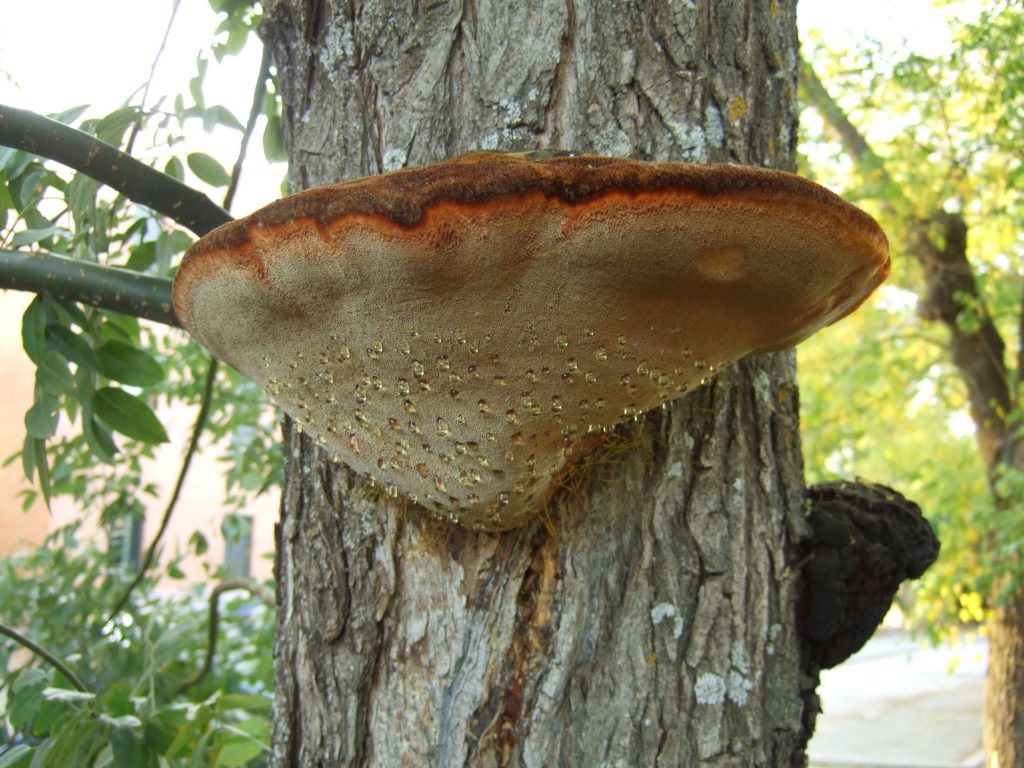 Inonotus Hispidus aka The Shaggy Bracket should not be confused with the Shaggy Mane, an utterly different species with an unfortunately similar name.

The shaggy bracket is indeed a bracket-like fungus, with fuzzy (not quite actually shaggy) fruiting bodies growing out of the trunks of certain hardwoods in North America, Europe, and Asia. The fungus is familiar to foresters and orchardists as a serious tree disease[i] capable of causing a white rot that weakens trees to the point where they lose major limbs or worse, but the mushroom also has its uses. Shaggy bracket is not considered edible, but it’s a traditional folk medicine in Asia and some parts of Europe, and is also used to dye wool.

Cap: Initially rounded, orange, and fuzzy, rather like a squashed peach, but grows larger and thinner (and darker) with age, becoming shaped like a blunt-edged plate. The interior flesh is pale brown. Can be very large at maturity.
Gills: There are no gills. The spores are released from pores on the underside of the cap. The pore surface is initially cream-colored, but darkens to buff and then to brown with age.
Stem: There is no stem. The mushroom grows directly from the side of the tree.
Smell: Nothing distinctive for identification.
Taste: Noting distinctive for identification.
Spores: Ellipsoid.
Spore color: White
Edibility: Not edible.
Habitat: Eats dead or dying hardwood trees, especially ash and apple. Fruits from the side of the trunk, usually but not always singly.

Shaggy bracket[ii] fruiting bodies are annual but fairly tough in texture and can persist for a long time. When young, they sometimes produce drops of colorless to reddish fluid. Very old specimens turn black as they begin to decay.

The closest look-alike may be the beefsteak fungus (Fistulina hepatica), but it oozes red juice when cut and is generally softer. The oak-loving inonotus (Inonotus dryophilus) is similar in color and shape but is not as fuzzy.  The spring chicken or white chicken (Laetiporus persicinus) is sometimes quite similar, and is fuzzy, but it’s softer, pinker, and usually has a short stem[iii]. There are other shelf-like fungi that at least vaguely resemble shaggy bracket, but can be differentiated fairly easily by a careful collector.

Shaggy bracket is not considered edible, though it’s difficult to find any source explaining why it is not; most likely the problem is that it’s too tough to be palatable, but whether it is also toxic seems unclear. The mushroom does have several uses, however, most notably for dying wool. Depending on the age of the mushroom when picked and which metallic salt is used as a mordant, it can produce green, red, orange, or yellow, all in rich but muted, earthy tones[iv]

Shaggy bracket is a traditional part of Chinese folk medicine, where it is used to treat a wide range of conditions, including dyspepsia, cancer, and diabetes[v], however the effectiveness of these treatments appears not to have been scientifically studied in a clinical setting. Various extracts of both the fruiting body and the mycelium have been assessed through chemical studies and by testing on cultured cell lines; such studies have shown that shaggy bracket extracts do have potential as anti-microbials and anti-inflammatories, and for immune support and in treating cancer[vi]. Again, there appear not to have been any studies of these effects in living subjects, either human or otherwise.

Shaggy bracket is not commonly sold for medicinal purposes in the United States.

Anyone wishing to use shaggy bracket medicinally should rely on the advise of a qualified, experienced practitioner.

Few if any sources address the safety of shaggy bracket as either food or as medicine. It may be toxic, or it may not be. The fact that it is a traditional treatment in China should not be taken, all by itself, as evidence of its safety or effectiveness; while the accumulated wisdom of folk traditions deserves respect, such traditions are capable of error, sometimes grave error.

2 thoughts on “Inonotus Hispidus: The Shaggy Bracket Identification and Benefits”