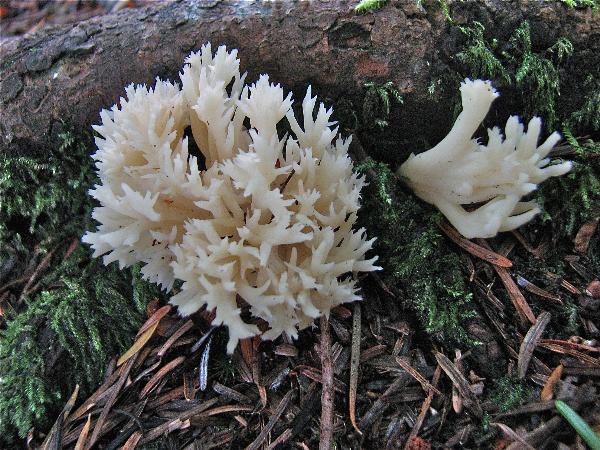 Clavulina cristata, The white coral mushroom[i], also known as the crested coral fungus, is a mushroom in that it is a fungus with a fruiting body large enough and distinct enough to pick—it’s even edible, although the texture can be somewhat unappetizing[ii]. It does not look like a mushroom, though.

There is no cap, no gills or pore surface, nothing in the way of the ordinary mushroom anatomy that articles like this one usually describe. Instead, the fruiting body branches and then branches again, like a tiny leafless tree, or like the corals this group of fungi are named for.

There are other coral mushrooms, but few other white ones.

One note on scientific names—although the name Clavulina cristata is widely accepted, Clavulina coralloides might be more correct, as it is older. In any case, the two names refer to the same species.

Shape, Size, and Color: Small to medium-sized, branched repeatedly. Branches are smooth with flattened, cristate tips—“cristate” means with points like a crown. White when young, aging to pinkish or pinkish brown. May blacken, if parasitized. Herbarium specimens become grayish or brownish when dried. The fresh interior flesh is whitish and brittle.
Smell: Nothing distinctive for identification.
Taste: Nothing distinctive for identification.
Spores: Subglobose and smooth.
Spore color: White.
Edibility: Edible, but most folks dislike the texture
Habitat: Fruits from the ground, alone or in groups, usually near conifers. May be mycorrhizal.

The cristate tips are a very distinctive feature, as is the color, to the point that those features alone are usually enough for identification—but not always.

Coral mushrooms in general suffer from a curiously contradictory body of public information; how many potential look-alikes white coral has, and which of them are or might be poisonous, varies widely from one resource to another, with many mycologists stating bluntly that the guidebooks are simply wrong.

White coral mushroom is often parasitized by another fungus, Helminthosphaeria clavariarum, which turns it gray to black—when it may resemble the related gray coral mushroom, Clavulina cinerea, which is gray to purplish and sometimes has cristate tips. A close look will disambiguate the two, since C. cinerea is usually paler at the base, whereas when white coral is parasitized the dark color starts at the base and moves up. Also, the tiny fruiting bodies of the parasite are visible under a hand lens as black dots.

The wrinkled coral mushroom, C. rugosa, typically is not smooth, branches less, and has blunt, not cristate, tips, but it and the white coral either hybridize or have alternate forms that resemble each other, because there are mushrooms that appear intermediate between the two.

The crown-tipped coral (Artomyces pyxidatus or, formerly, Clavicorona pyxidata)[iii] is white or whitish and does have crown-like branch tips (as the name implies), but it grows directly from wood, not from the ground. It is edible (and apparently a better-known edible than white coral), though not choice[iv].

Some of the ramaras, another group of corals, are whitish, and although they grow from wood, the wood may be buried, producing the illusion that the mushrooms are growing from the ground[v]. Other ramaras are more colorful. Ramaras are commonly eaten by many people, despite being considered mildly toxic by others[vi].

There are other coral mushrooms, including some definitely poisonous species[vii], that are at least vaguely similar in shape to the white coral, but they are not white[viii]. Many do not share the same range as white coral anyway.

As mentioned, getting a reasonably complete list of look-alikes for white coral is difficult, so there could be others.

Finally, they aren’t exactly mushrooms, but some species of reindeer lichen are also white or whitish, and branched. Although no one familiar with coral fungi would confuse the two (reindeer lichens are much more finely and intricately branched), a normal part of human neurology is to not notice unfamiliar detail—for example, an experienced wine taster can clearly distinguish vintages while a beginner notices only the taste of wine in general. In a similar way, a beginner who knows only that white coral is white and branched could well be distracted by reindeer lichen.

Though not choice, white coral is edible and reportedly quite healthy to eat (as are most mushrooms). And while white coral is not used medicinally, the gray coral is used traditionally in Africa, and preliminary research suggests it contains substances that could be useful against cancer[ix]—which does nothing to prove white coral’s value, but perhaps it should be studied for medical value as well.

White coral is not used medicinally at this time, so there is no dosage.

As noted, it’s difficult to get a straight and consistent answer about the edibility of coral mushrooms. White corals, like many other mushroom species, are reported to cause gastrointestinal problems in some people[x], but it’s unclear how common such problems are for this species—they may be over-reported. How dangerous miss-identification might be is likewise hard to assess, because some look-alikes are either fine to eat or poisonous, depending on whom you ask.

In the end, the most dangerous thing about the coral mushrooms may be that published information on the subject is inconsistent, making it difficult to be sure what is safe.