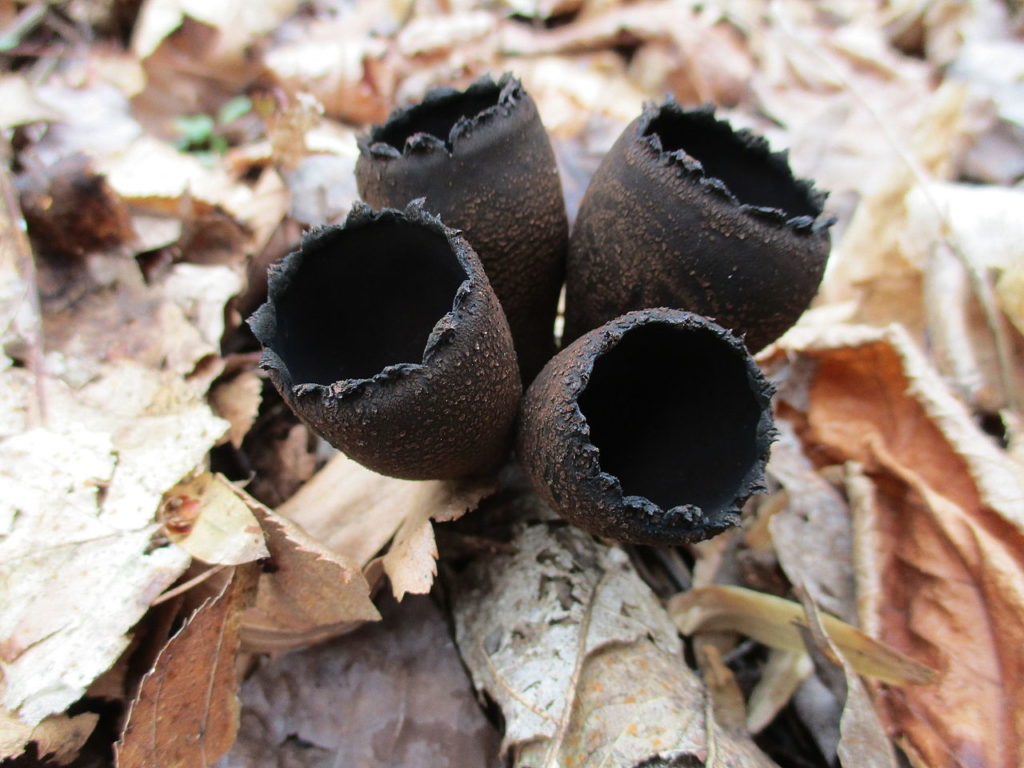 Urnula craterium, popularly known as the black tulip or the Devil’s Urn, is one of those fungi whose usefulness is subject to some debate. Some mycolgdescribe it as edible (even delicious![i]), while others assert that it is completely unpalatable, or even that its safety as a potential food is unknown. Why experts disagree on such basic facts isn’t clear.

What is clear is that these oddly-shaped little fungi are fun to find. Not only does the fruiting body look like a goblet or an urn, but under the right conditions (for example, if you blow on one of the right age), it will actively squirt out little clouds of spores—sometimes with an audible hiss![ii]

Shape, Size, Color: Small to medium-sized, cup-shaped or urn-shaped. Young specimens have a narrow opening at the top, but the opening widens with age, becoming more goblet-like. The stem is not very distinct, since it widens gradually to join the cup. The interior flesh is white and does not change color when sliced. Can be anywhere from black or brown to gray. The inside of the cup is the fertile surface (where spores are released). It is quite smooth. The outside of the cup is often rough, scaly, cracked, or patterned.
Smell: Nothing distinctive for identification.
Taste: Nothing distinctive for identification.
Spores: Ellipsoid to elongated-ellipsoid.
Spore color: blackish-brown.
Edibility: Uncertain.
Habitat: Eats dead hardwood—often appears to fruit from the ground because the wood in question is buried.

In eastern North America, U. craterium[iii] fruits in the spring, often at the same time as morels, meaning that finding these mushrooms is a welcome sign for morel enthusiasts[iv]. It can appear singly or in groups, and the fruiting bodies sometimes last as much as several weeks. When very young, the fruiting bodies are closed, somewhat like grapes or stemmed puffballs (but blackish)[v]. Then the top opens. The opening is small and even at first but becomes larger and a bit irregular with age, as though artfully cut by tiny pinking shears.

Several other species differ more from U. craterium but could still confuse the unwary.

The Black Trumpet (Craterellus fallax or Craterellus cornucopioides) not only has a similar name but also a vaguely similar shape to the black tulip[vii]. However, the black trumpet is a chanterelle, not a cup fungus; its cap bells out, like the end of a trumpet, rather than curving inward, like a goblet, and its ridged outer surface produces its spores. Plus, black trumpet fruits in the summer, not in the spring.

Hairy rubber cup (Galiella rufa)[viii]  is cup fungus, and it, too, grows on dead sticks and logs. However, its fertile layer is brown and squishy, somewhat suggesting a peanut-butter cup, and it fruits in the summer.

Very young U. craterium, before the cup opens, can look like the group of fungi collectively called dead man’s fingers (their fruiting bodies do indeed resemble human fingers poking up out of the soil, at least during part of their development)[ix]. The resemblance does not last.

No one claims that U. craterium is at all toxic, though not every authority seems sure it is safe to eat. Strictly speaking, the jury seems to be out.