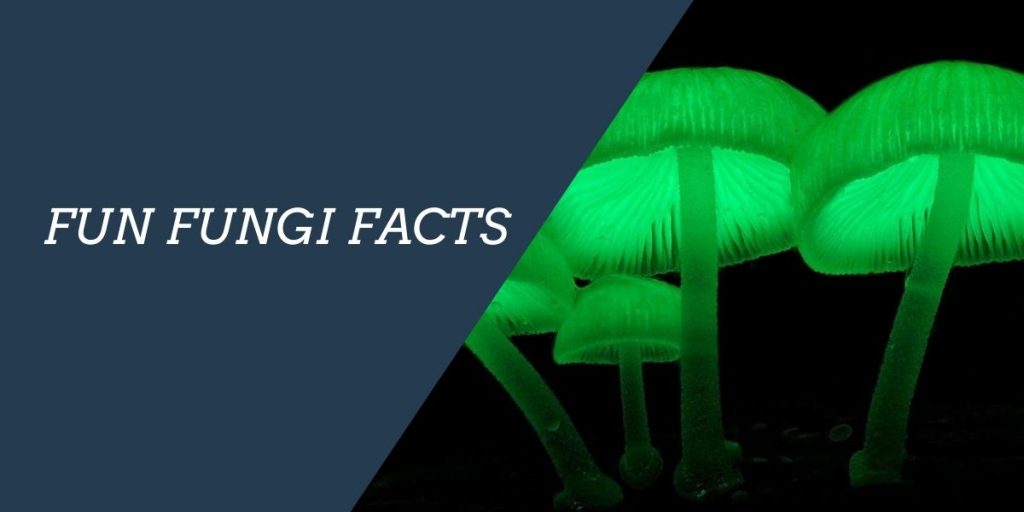 Fungi are awesome. How awesome are they? Well, we could go on all day, sharing our favorite fungi facts, but here are just ten, ranging from the fun-to-know-but-kinda-random to ones that have a direct impact on your life.

1. Fungi Are More Similar to Animals Than to Plants

For many years, scientists classified fungi as plants—some writers still call them plants. It’s true that fungi, like plants, have no muscle tissue and can therefore only move by growing (or by hitching a lift). But once scientists learned to take a closer look, they realized that almost everything else about fungi is more animal-like.

Fungi have to eat to get energy, just like animals. Some are even active hunters, capturing nematode worms in little underground nooses. Fungi, like animals, must have a source of fresh air for breathing. They need oxygen. Plants need oxygen, too, the difference is that since plants make all the oxygen they need and more, they don’t need to breathe it in. Fungi, like animals, do. Fungi, like animals, need vitamin D and can synthesize it by exposing certain precursor substances to sunlight. And although fungal cells have walls (unlike those of animals), those walls are made of chitin, the same substance that makes up insect exoskeletons.

Fungi are not animals, clearly. They belong to their own kingdom. But the fungal kingdom is a close neighbor of ours.

2. Fungi Have More Than Two Sexes

Most people probably assume that fungi use mushrooms for reproduction, if they think about it at all. It’s true that mushrooms produce spores, which are sort of the fungal equivalent of seeds—but spore production is only part of the process. The other major part is mating. Fungi have sex when the growing tips of fungal threads (hyphae) meet and merge. The baby grows out from that point of merger. A genetic marker identifies each fungus as belonging to a “mating type” and prevent matings between hyphae of the same type—that way, a fungus can’t do the equivalent of getting itself pregnant.

The mating types are sexes in that a fungus must find a partner of the right type in order to make a baby. But because the types are exactly the same except for their identification markers (no sperm, no eggs, no males or females), a fungal species can just start adding extra sexes, no problem. The more sexes a species has, the more likely individuals are to find a mate unlike themselves. There is at least one species with thousands of sexes.

3. Not All Fungi Produce Mushrooms

Many people think of mushrooms as plant-like, imagining that the mycelium is analogous to roots. Actually, the mycelium is the main part of the fungal body, the part that eats, breaths, mates, and so forth. The mushroom is just the fruiting body, where spores are produced and released. And not all fungi grow mushrooms at all.

Some fungi release their spores from fuzz or crust, or some other non-mushroom structures. Some fungi, such as yeasts, are single-celled and thus don’t have spore-producing structures at all.

4. Fungi Can Digest Cellulose—Something Neither Plants Nor Animals Can Do

Have you ever wondered why trees don’t lose weight? Sure, they can drop leaves and even branches, but a thick tree doesn’t get skinny if too many days go by without sunlight. That’s very different from how we animals do things. With very few exceptions (hair, baby teeth), we don’t shed the parts we don’t need anymore, we reabsorb them. Our fat, our muscle, even our bones can get thinner and lighter if we need to reuse those nutrients elsewhere. So why can’t trees do the same?

The reason is that our bodies can metabolize meat, including the meat our bodies are made of—we can recycle ourselves—but plants can’t metabolize cellulose. Animals can’t either. Termites and other wood-eaters have micro-organisms in their guts to digest the wood for them. Some fungi, notably those that cause “brown rot” in wood, do have the unusual ability to eat cellulose. If it weren’t for them, dead trees would mostly just stick around, building up in huge piles on the ground. Wood wouldn’t go back into the soil.

5. Some Fungi Cooperate With Plants

Many plants, including most trees and all orchids, don’t grow very efficient root systems—instead, their roots partner with fungi, whom they feed with sugar in exchange for water and minerals. A single fungus can partner with multiple trees (even trees of different species) and can therefore take sugar from one tree and give it to a different tree, perhaps one that doesn’t have enough sunlight. Keeping all the trees in the network healthy is ultimately better for the fungi. Trees can also connect their roots directly, but fungi are an important part of what’s been called “the wood-wide web” by which trees communicate and cooperate.

Not all fungi can form these mycorrhizal partnerships, but some of our best-known species can. For example, most morels are mycorrhizal.

Lichen, which can resemble crusts or mosses, or even leaves or tiny trees, are a partnership between fungi and algae or cyanobacteria. The fungus provides a protective structure while the algae or cyanobacteria inside it provide sugar made by photosynthesis. Lichens are important for developing soil on previously bare rock or sand, and form a significant amount of biomass of some forests. Some are edible or useful in medicine. They are the primary food source of reindeer. It’s possible to go on for many pages about the awesomeness (and fascinating strangeness) of lichens. Although each kind of lichen is actually a combination of two or three species, scientists treat lichen types as species—it’s just easier that way.

7. Fungi Can Be Used in Healing—But Can Also Cause Disease

Most fungal diseases involve plants. In fact, most of the diseases plants get are caused by fungi. But there are a few fungi that can attack animals, including humans, too. The Candida yeasts may be the most common. Some Candida species live on humans naturally and are part of our healthy microbiome, but if something causes the yeast to grow out of control, or if the yeast are introduced to the bloodstream, where they don’t normally grow, they can cause illness. Athlete’s foot and ringworm are also common fungal infections. There are more rare, and more serious, examples, too, including some mushroom-producing species that can attack immunocompromised individuals. Fungal infections can usually be treated fairly easily, once properly diagnosed. Strangely even though Candida is a fungus, it can also potentially be treated with other Mushrooms.

8. Some Fungi Can Be Used to Make Dye

Many mushrooms, some edible, some not, can be used to make dyes (like the  dyer’s polypore). The color depends on both the species and how it is processed—that is, a single species can be made to yield more than one color. The possible colors include browns, reds, blues, and greens, usually in a dull but lovely “earthy” shade. There are organized groups of mushroom-dye enthusiasts, just as there are enthusiasts for every other kind of mushroom use.

9. The Largest Organism in the World Is a Fungus

What is the largest living thing? Is it a blue whale? A redwood tree? Nope, it’s a fungus, specifically a honey mushroom fungus in Montana. Honeys attack living trees, eventually killing them, and can spread from one tree to another underground. This particular individual has spread, tree to tree, for miles. A person walking around in its forest might not notice anything unusual—all healthy forests do have fungi, and all healthy forests except the extremely young do have a few trees that are sick and dying. Honey mushrooms aren’t unusual. The only odd thing is that in this forest, for miles around, all the honey mushrooms, all the honey-mushroom mycelium creeping through dead and dying wood, are all the same individual.

10. A Fungus Has Probably Saved Your Life

Mushrooms are famous for their use in alternative medicine, although very few of these uses have actually been confirmed yet by medical science. But there is a medicinal use for fungus that is unambiguous; penicillin, and many other antibiotics, are made by molds. Molds are fungi. Without antibiotics, a simple infected paper cut could be deadly, not to mention diseases such as scarlet fever, tuberculosis, or even leprosy, diseases that once terrorized populations and have now become rare and, for the most part, routinely treatable. And that’s not to mention bread, beer, kombucha, and some dairy products, none of which would exists were it not for yeasts, another branch of the fungal kingdom. Without fungi, many of us would be sick and hungry—or simply not here anymore. You have a lot to thank fungi for.