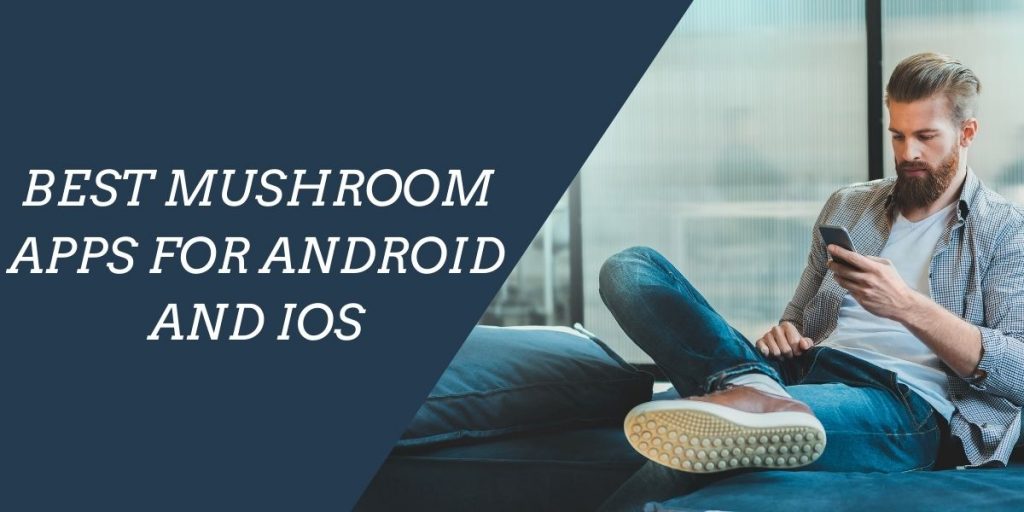 Mushroom identification apps have become popular, especially among people who want a quick answer to an identification problem. The best of these apps seem to promise to make the world of mushrooms more accessible than ever before. So let’s take a look at some of the most popular apps out there, how they work and why users like them so much. And then let’s take a look at some other options and consider whether the apps really are the best method for finding out what mushrooms are out there.

The following list is in no particular order. It’s made to simply inform you on what each app does and doesn’t do.

This app uses image-recognition technology to identify mushrooms from pictures. The system is still learning, but can currently recognize at least 900 species. And while it will sometimes misidentify a species (no app is perfect), it will also provide a list of similar species, and if the app’s first guess is wrong, one of these look-alikes is probably right. Other features include a tool that uses local weather conditions and the time of year to predict when certain edible species may be fruiting and a community forum where uses can contact each other for advice.

We appreciate the app’s accuracy, the option to scan through multiple species to find the right match, and the option to connect through the app with others. The app is still in development (many mushroom ID apps are), so users who recognize its potential—what it will be like once it is finished—tend to give it the best marks.

Shroomify guides users through selecting the characteristics of the mushroom, then on the basis of that information shows the most likely candidates for the user’s current location and time of year. Alternatively, one can look up the most common twenty species for the current month. The app covers more than 400 species with a library of over 1000 images. Welike the ability to narrow down the search to only those species currently fruiting in the right area.

The app rapidly identifies mushrooms from pictures but it’s difficult to tell the accuracy rate or the number of species the app covers. Besides identifying the species, the app also provides extra information on each mushroom. We love the speed and ease of use. 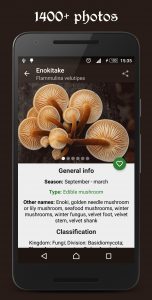 Book of Mushrooms does not recognize mushrooms. Instead, it guides users to a group of likely possibilities. The user then looks through pictures and chooses one that looks right. The app covers only 254 species, but its image library includes over 1400 pictures and can show each species from multiple angles and in multiple variations. The app also includes information on where the mushroom grows, whether it is edible or toxic, and other information. There’s also a calendar showing which species are currently fruiting, introductory articles on basic mushroom hunting, and a “favorites” feature allowing users to make easily-accessed, custom lists. Users appreciate all the extra information. 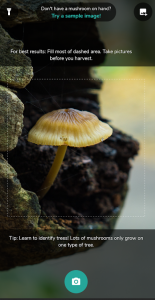 ShroomID is a picture-recognition system that uses machine learning to constantly improve its accuracy. It is currently right 80% of the time—that’s impressive from a technical perspective, and adequate for users who want a quick satisfaction to their curiosity. It’s not good enough for collecting for the table, but then again, only people who are already experts should be collecting for the table anyway. The app covers more that 1080 mushroom species, far more than could be covered by a pocket-sized paper guide. An important feature is that the app still works when the phone is offline.

Other features include the ability to import and analyze photos from the user’s camera role, charts and maps showing when and where a mushroom might be found, and easy comparison of the identified mushroom with images of look-alikes. We appreciate the additional information provided by each species and the ease of use.

Apps have their advantages—they’re quick, simple to use, and can put far more information at a user’s fingertips than any but the most bulky reference book.

But apps shouldn’t replace field-guides or books. An app can introduce someone to mushroom hunting, or it can help a more experienced hunter rapidly survey a new area, but no app is yet accurate enough to be trusted for identifying table fare or specimens for scientific study (consider that 80% accuracy is still considered worth boasting about, but that means two out of every ten, on average, are wrong. What if one of the wrongly-identified mushrooms is a poisonous look-alike?

Even perfect image-recognition software (something that doesn’t exist yet) would not make an app 100% reliable, since identifying mushrooms often includes making spore prints, sniffing the mushroom, examining its spores under a microscope, or other tasks a cell phone can’t do.

And there is another reason, beyond accuracy, not to ditch the books.

Looking up a mushroom in a book is slow, sometimes laborious, but the very process of looking for the various identifying characteristics and keying them out is what teaches a bigger how to think about, how to see mushrooms. Without that process? An app can identify a mushroom, but only a book or a human being can teach a person to identify a mushroom.

Here are some non-app sources of mushroom information.

A standard reference with 2000 species and lots of gorgeous pictures. The book is based on an identification key—although beginners may find keys take some getting used to, they really are an effective means of both finding the right ID and learning what kinds of details to look for and how and when to look for them. There are also essays on everything from mycological terminology to cooking mushrooms. A well-regarded book for both beginners and more advanced mycophiles.

A beginner’s guide organized by color (no key) but with lots of additional information for each species, including a detailed physical description, habitat notes, fruiting season, folklore, and whether it’s edible. There are also essays on mushroom anatomy and, of course, cooking and eating mushrooms. It’s a beginner’s book, but a serious one. It covers 700 species and is small enough and sturdy enough to live in the bottom of a well-used day pack.

The book does have a few errors, some of them serious, and since it covers all of North America, there are many species within its range it cannot accommodate—it’s a good book for beginners, to be followed up with a more advanced text with a regional focus.

All That Rain Promises and More: A Hip Pocket Guide to Western Mushrooms, by David Arora

This one is a pocket-sized beginner’s field reference covering just 200 species, but by focusing on a single region, it can cover most of the species the user is likely to encounter in that region. The book is also designed to work as a companion to the much larger and much more comprehensive Mushrooms Demystified, by the same author, and is cross-referenced accordingly. More advanced mycophiles can use it to jog their memories or to quickly look up details while in the field. A large helping of whimsy is an added benefit—the trollish-looking person with a mushroom and a trumpet on the cover is a good indication of the book’s mood, as the pages are sprinkled with quotes and pictures documenting various, often quirky, mushroom adventures.

A drawback is that there are no notes on look-alikes, making it difficult for beginners especially to be sure they’ve got the right species. The color in the gorgeous color pictures is also a little off, which also can make some things difficult. But overall, users love the book for being beginner-friendly, clear, and engaging. It’s a great as a first step or as a supplement for other books.

Online forums, such as those found on Reddit or Facebook, can be great places to learn about mushrooms, but it’s important to recognize that Reddit or Facebook, or whatever else are not really information sources. Rather, they are ways to get in touch with people who may be information sources. Or, the people might not know anything relevant at all.

Using online forums is a bit like trying to find information in a crowded room (“hey everybody! Can anybody here remember if Stropharia species have skirts?”). If you happen to encounter a well-informed expert, you can learn a lot. If you encounter a misinformed person who likes to talk, you can end up seriously confused. The key is to use these forums as ways to get to know people, so you can learn who is reliable.