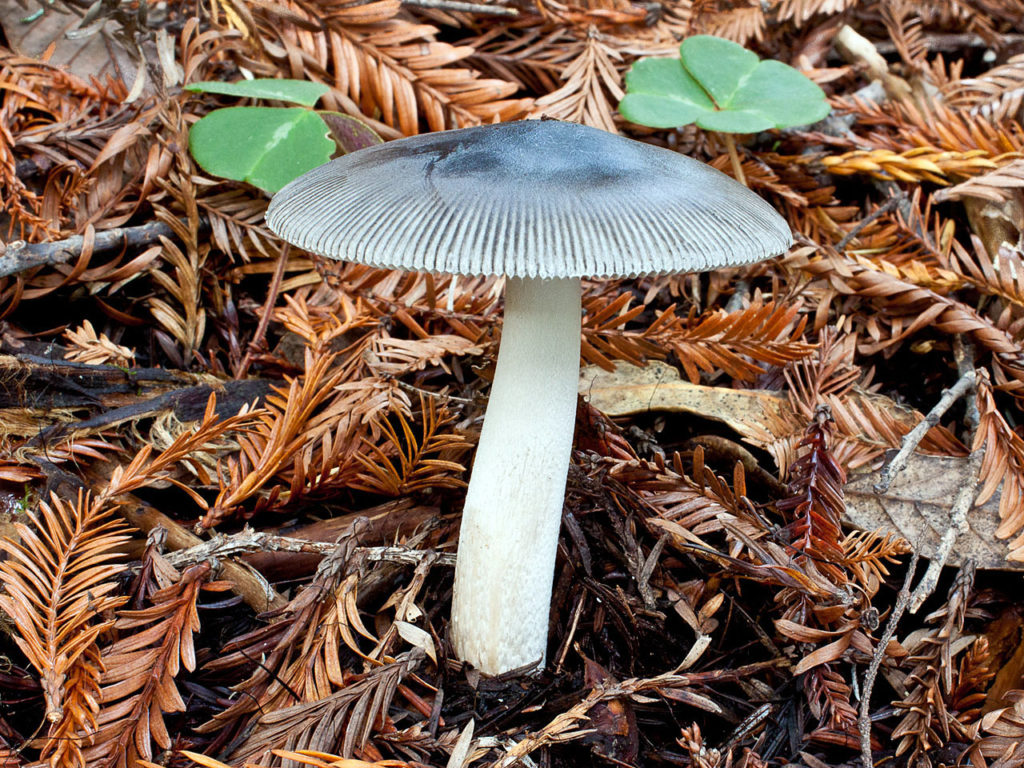 Amanita vaginata is another mushroom whose name is likely to make some people giggle, but this time etymology, not the shape of the mushroom, is responsible. “Vaginata” is, indeed, a form of the Latin word “vagina,” which did indeed become the English anatomical term. However, “vagina,” in Latin, means “sheath.” How the word got applied to the body part is an interesting question, but it got applied to the mushroom in a very straightforward way; the cup of tissue at the base of the stem is sheath-like[i].

Giggles out of the way, it’s time to return to mycology.

Unlike some of their more famous relatives, the grisettes are not known to be psychoactive, and while their chemistry suggests medicinal potential, they are not normally used medicinally.

Cap: Small to medium-sized, opening like a parasol to become almost flat (but with a central bump) with maturity. Gray to brownish, with or without a few white or grayish patches (the remnants of the universal veil). The interior flesh is white and does not bruise or stain when cut. The edge of the cap is prominently grooved.
Gills: White and crowded, either not attached or only slightly attached to the stem.
Stem: Long and thin, smooth or slightly scaly. There is no ring. The volva—the sheath at the base for which the species is named—is sometimes grayish or reddish brown.
Smell: Nothing distinctive for identification.
Taste: Nothing distinctive for identification.
Spores: Rounded, smooth.
Spore color: White
Edibility: Edible, with extreme caution.
Habitat: Grows in mycorrhizal partnership with both hardwoods and conifers, but seems to prefer urban areas and disturbed ground over wilder forests.

As an amanita, this mushroom is easier to describe if one understands a few of the distinctive features of the amanita group. Amanita fruiting bodies begin as small knots of tissue enclosed by a shell of tissue called the universal veil. Fittingly, this early stage is called the egg. As the stem starts to lengthen and the cap starts to expand, the veil breaks, leaving a cup-like remnant, the volva, at the base of the stem—at least in many amanitas. Pieces or patches of remnant veil tissue also usually stay scattered on the top of the cap. A second, partial, veil covers the gills but breaks as the cap expands—in many species leaving a skirt-like ring of tissue around the stem partway up.

Grisettes have a prominent volva but do not have a ring. Patches are sparse and may or may not be present.

Originally, the name A. vaginata was applied to little gray amanitas across North America and Eurasia, but as often happens with mushrooms, the group is now known to include multiple species. Unfortunately, it’s not yet clear how many species there are—some experts recognize only a few but admit these are highly variable, while others recognize dozens but admit they are almost exactly alike. At the moment, the safest bet is to refer to all of them as vaginata-like amanitas. Or, one could follow the facetious suggestion of one expert and just call them “Steve.”[ii]

The other named species in the group include A. constricta, A. pachycolea, and A. protecta[iii]. All are gray to brown, have a grooved or “striate” cap, and no ring. Most of these others are bigger than A. vaginata (as currently defined) and differ from it and from each other in the details of coloring and of the shape of the volva. Sorting out exactly which species is which may not be possible at present, since the taxonomy—the definitions of the species in this group—is very much in flux.

Conceivably, some of the other amanitas, including some dangerously toxic species, like The Deathcap (Amanita phalloides), which does have a prominent ring but otherwise has a similar general “look.”[iv] The ring could also be missing in some individuals due to damage, and the deathcap has been accidentally introduced in many places and therefore now has an almost world-wide range[v]. A careful and experienced collector should not have difficulty separating the vaginata-like amanitas from other amanitas, but a beginner, or someone inattentive, might well make a mistake.

Finally, any amanita in its egg stage could be mistaken for a puffball, or for a stinkhorn in its egg stage. Slicing the egg vertically to check its internal structure will resolve the confusion.

Grisettes are edible, but apparently they aren’t very good; lack of culinary interest combined with the dire consequences of misidentification mean thse species are almost never eaten[vi]. Their nutritional benefits are therefore unknown and largely irrelevant.

Chemical studies of substances extracted from A. vaginata suggest that it has medicinal potential, but the extracts have not been tested on living subjects[vii]. Grisettes are not generally used medicinally.

Since A. vaginata is not used medicinally, there is no dose.

Although A. vaginata is not known to be toxic, the fact that nobody knows which vaginata-like species is which should be a major red flag. Simply put, since we haven’t discovered all the grisette species yet, we don’t know there isn’t a toxic one, nor do we know which of the grisettes as currently defined might include the undiscovered toxic species. And even if all grisette species are safe in a general sense, since few people ever eat vaginata-like amanitas, there is little to no information on long-term or excessive use, interactions with alcohol or medications, or any of the other issues that often turn out to be important for edible mushrooms.

The safest thing is to recognize that we simply don’t know whether these mushrooms are safe to use.

3 thoughts on “Amanita Vaginata: The Grisette Mushroom Identification and Info”