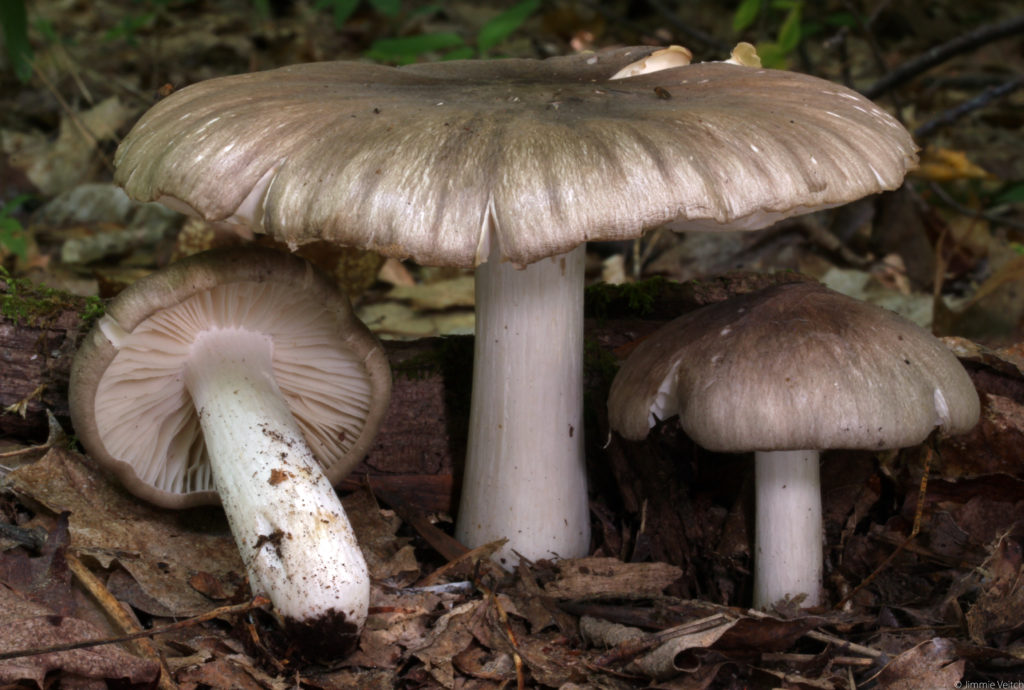 The platterful mushroom sounds like it ought to be edible, something one would want a platter full of. But while some people do eat it, no one seems to like the taste much, and some of those who eat it get sick. It has no known medicinal use. People who like mushrooms for their own sake, without requiring them to be useful, appreciate this one for ending the post-morel lull—that is, after morel season there is, at least in some parts of this species’ range, a virtually mushroomless season when mycophiles have little to interest them. The modestly pretty platterful ends the drought, ushering in the time of year when mushrooms of many different species pop up all over.

Megacollybia is another genus able to fascinate anybody who likes taxonomic puzzles, since until relatively recently it was thought to include just one widespread species. M. Rodmanii is the one of the group that grows in eastern North America.

Cap: Small to large. Opens like a parasol as it matures, but rarely becomes entirely flat; may develop a depression in the middle. May crack on top with age. Can be any of several different shades of brown. The interior flesh is whitish and does not change color when sliced.
Gills: Whitish, attached to the stem, variable in shape and density.
Stem: Long, thin, and whitish. May have white, root-like rhizomorphs at the bottom, under the substrate.
Smell: Nothing distinctive for ID purposes.
Taste: Taste reported as “mild.”
Spores: Smooth, ellipsoid.
Spore color: White.
Edibility: Unknown.
Habitat: Eats downed (and sometimes buried) dead hardwood. Fruits either singly or in groups.

There is no reliable way to tell the different species of Megacollybia apart, other than by taking note of where the mushroom in question is growing and what it is eating—the fact that there are multiple species was only discovered by genetic sequencing[i]. It’s not that they’re all exactly alike, it’s that the differences are subtle and the species variable. M. Rodmanii itself has at least two different “forms,” one with an extremely long and skinny stem and subtle or absent rhizomorphs, and one with a more moderate stem and many obvious rhizomorphs.

There may well be Megacollybia species that have not yet been discovered and are still being mistaken for other species.

There are a lot of medium-sized, brown and white, parasol-shaped mushrooms. The white rhizomorphs are an excellent way to distinguish megacollybias from other groups, and they are the reason the European species is called the whitelaced shank[ii], except the “laces” usually aren’t visible unless the mushroom is carefully dug up, and in any case one form of M. Rodmanii is often without them.

There are a couple of notable look-alikes[iii].

Clitocybula lacerata, one of the larger coincap mushrooms, looks quite a bit like the platterful, but is smaller, has amyloid spores, and never has rhizomorphs.

Some of the trichlomas, such as Trichloma virgatum, are also similar, but smaller and lacking in rhizomorphs, plus they don’t grow on wood.

The deer mushroom (Pluteus cervinus) and its almost-but-not-quite-entirely identical relatives are also close look-alikes, are in the same size-range as the platterful, and also usually eat dead hardwood. However, they don’t have rhizomorphs, their spore print is brownish pink, and their gills are pinkish, except in very young specimens[iv].

And of course there are all the almost-but-not-quite identical megacollybias that aren’t M. Rodmanii. In North America there are four named species: M. fallax, M. texensis, M. subfurfurancea, and M. Rodmanii.  There are doubtless others not yet recognized. M. platyphyla, the European species, is the one whose name was once applied to the entire group, and so it may appear in older field guides for North America, thus causing further confusion.  Although these species may differ slightly (having a yellow tinge to the gills, say, or a swollen stem base), the two forms of M. Rodmanii differ from each other at least as much. The best way to tell megacollybias apart at present is with a map; east of the Rockies in North America, M. Rodmanii is the best bet.

Some people who eat M. Rodmanii get sick. Others do not. It’s not clear why, or whether this is an edible species some people react badly to or a toxic species to which some are immune. It’s possible this is really two (or more!) species, one edible one not, although it’s not unusual for reactions to a single species of mushroom to vary. Whether the people who eat M. Rodmanii without apparent ill effect run any kind of risk from long-term or excessive consumption isn’t clear.

The safe course appears to be to simply not eat. Those who which not to take the safe course should record what happens and let the rest of us know.