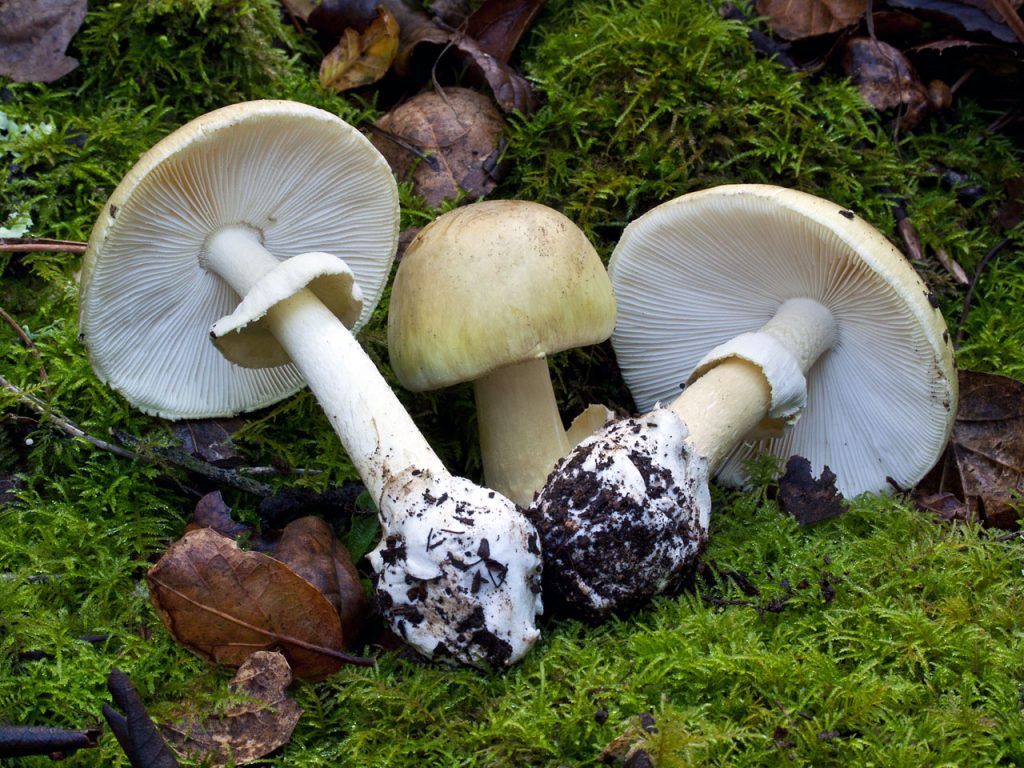 Amanita Phalloides or The Death Cap[i] (or Deathcap or Death Cup) is one of several aptly- and ominously-named mushroom species in which each fruiting body contains a lethal dose of one or another amanitin toxin. We’ll get into exactly what amanitins do in a bit, but most people who eat these things do not survive. Some do, so poisoning victims should not give up, but it will be a very close thing.

The Death Cap specifically is considered the most deadly mushroom in the world, since it is responsible for the vast majority of known mushroom-poisoning deaths on record. That doesn’t necessarily mean that eating one is worse than eating any of its deadly colleagues—dead is dead, after all. Possibly it gets eaten more often. The species is very widespread, and getting more wide-spread year by year. And in much of its range it is mostly urban and suburban, meaning lots of people encounter it. Death Cap is a large, stately, handsome mushroom, so it’s easy to understand how it attracts attention. Then, too, there are historical instances of it being used as a murder weapon. That has to raise its body count a few notches.

The reason the species’ range is growing is interesting[ii]. Death Cap, like all Amanitas, is mycorrhizal, meaning it lives in partnership with tree roots. The specific trees death cap is most fond of are European species that have been shipped all over the world by plant nurseries. There is no way to remove the fungus once the partnership forms, and up until recently nobody knew that death cap was traveling with the trees—the fungus doesn’t fruit until its partner is at least several decades old and is strong enough to spare the extra sugar to feed mushroom production. New populations of Death Cap today reflect landscaping decisions made a generation ago or more.

Death Cap can partner with non-European species, and does, but the fungus is relatively poor at propagating itself through spores, so it rarely spreads to native trees. In many areas, it is an exclusively urban and suburban mushroom.

Cap: Medium to large, white when young but usually (not always!) becoming some shade of green on top. There are no veil remnants on top, except when very young.
Gills: White at first, usually becoming cream-colored or even pinkish.
Stem: Tall, column-like, white or whitish, with a swollen base surrounded by a cup of tissue. The ring partway up looks flimsy but usually persists into maturity.
Smell: Indistinct in youth but becoming foul with age.
Spores: Ellipsoid to almost round. Smooth.
Spore color: White.
Edibility: Deadly poisonous.
Habitat: Lives in partnership with, and fruits from the ground beneath, many tree species, but favors oaks.

To really understand Amanita identification, it’s important to know how Amanitas develop. In its button stage, when it first begins to develop, the mushroom is surrounded by a shell of tissue and is therefore referred to as an egg, an Amanita egg. The shell is called the universal veil. As the stem begins to lengthen, the universal veil is ruptured. Generally speaking, its remnants form a cup of tissue around the base of the stem, called the volva, and wart-like patches on the top of the cap, but either or both may be missing or fragmentary in some species. The developing mushroom also has a sheet of tissue covering the gills called the partial veil. As the cap expands, the partial veil ruptures, leaving a ring on the stem and some ragged fragments on the rim of the cap, though again either can be missing in some species.

The partial veil and the universal veil aren’t unique to Amanitas, though few if any others have both features. Usually it’s one or the other or neither. In any case, the presence and structure, or the absence, of each of these veil remnants are important identification features in mature Amanitas. Immature Amanitas have different features because the veils are still intact. To recognize an Amanita, it’s necessary to not just know what it looks like when mature, but also when it’s an egg and in its immature form when the universal veil has ruptured but the partial veil still has not.

But since Destroying Angels and Death Caps are equally disastrous to eat, containing similar concentrations of the same toxins, most people don’t regard the distinction as that important.

Far more concerning is the potential for mixing up edible species with the Death Cap. How many edible look-alikes the death cap has depends on how good the person doing the looking is with mushroom identification. Death Caps particularly have probably been mistaken for almost all edible white, whitish, greenish, or brownish-capped gilled mushrooms at one time or another by people who made simple mistakes, such as not checking the color of the gills. Such mistakes account for much of the Death Cap’s body count. There are some closer look-alikes, though.

A death Dap egg looks almost exactly like certain species of Puffballs. Puffballs are popular edibles and are often recommended to beginners at foraging as easy to recognize. It is absolutely essential to slice all puffballs intended for the table vertically to check for the outline of an embryonic Amanita inside. A real puffball will be homogeneous inside (and all-white, unless spore maturation has begun, rendering even real puffballs inedible). Stinkhorn eggs also resemble Amanita eggs, although that is less of a concern given that most people don’t realize stinkhorn eggs are edible. Those who do want to try stinkhorn egg must learn how a sliced-open stinkhorn differs from an Amanita.

There are also several species of edible Amanita, plus one or two that can be used as psychotropics if properly processed first (otherwise they contain non-lethal, but still deeply unpleasant, toxins). Most of these differ from Death Cap in color, but identification may be a problem in the egg stage, since the universal veil is often white even if the mature cap isn’t. Reportedly, there is a popular Asian edible Amanita that looks very much like death cap even at maturity. Confusion with the Asian species accounts for the very high prevalence of Death Cap poisonings among Asian immigrants in California and the Pacific Northwest. Many experts recommend against eating any Amanita, because of the potential for misidentification.

If you happen to be a murderer, you might find death cap very useful. It was a favorite of Roman poisoners during the classical period, possibly because the delayed onset of symptoms characteristic of amanitin-poisoning makes the source of the illness harder to identify. Also, the edible and delicious Amanita caesarea was (and remains) very popular for Roman tables, which probably made it easier to slip a different Amanita species into the meal. Reportedly, Death Cap tastes delicious, too. The victim will suspect nothing.

Please nobody think we condone murder.

More seriously, it’s worth noting that “can I eat that?” is not the only way to judge an organism. Death Cap fungi are our fellow Earthlings. They aren’t evil—if they could talk, they’d probably point out that they don’t want us eating their fruiting bodies anyway. And to the trees they partner with, these fungi are very beneficial. Provided you remember not to eat the mushrooms, having Death Cap on your oak’s roots is probably a good thing, at least if it’s native to your area.

The wording of this heading looks funny. It’s our standard heading for the last section of our species profiles, but normally we’re writing about something edible or medicinal. Of course there is no safety in Death Cap other than never, ever eating it, and there are no side effects because you are never, ever going to eat it. Anyway, we hope you aren’t.

But for readers with interests that incline to the morbid, we can tell you what happens to people who do eat it.

Symptom onset usually takes anywhere from six to 24 hours, which is long enough that many victims assume the mushroom meal can’t possibly be the thing making them feel ill, and so they don’t think to tell their doctor about it. Unfortunately, it’s also possible for people to be simultaneously poisoned by some other thing (a second species of poisonous mushroom, perhaps, or improperly-cooked meat) that starts causing symptoms much earlier, so getting sick within six hours of eating a mushroom doesn’t rule death cap out.

The first symptom is a vague feeling of uneasiness, developing into intense gastrointestinal upset that may last a day or more. Eventually, these symptoms resolve. The patient appears to recover. A few days after that, their liver fails. Then their kidneys fail. There may be brain damage.

There is no known antidote for amanitins, the primary toxins responsible for all this havoc, though perhaps one may be discovered. For now, the standard treatment is to support liver and kidney function as much as possible and to stand by with transplants in case those organs fail. Some people survive. Some people even survive with their own liver and kidneys, if their bodies can flush the poison before too much damage is done.

If you or someone you know eat something that could have been a Death Cap, don’t give up hope. Call a Poison Control Center. If possible, get a sample of the mushroom so the hospital staff can get a definite diagnosis. Get help fast. You have a chance.