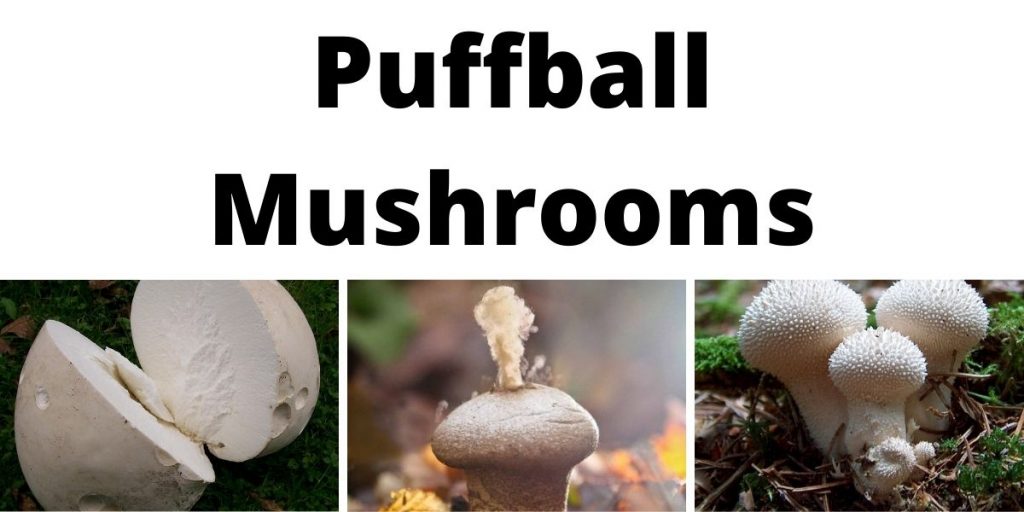 Puffballs[i], as a group, are easy to recognize. They’re fungal fruiting bodies that produce their spores inside enclosed balls of tissue. The spores eventually escape when the ball either ruptures or develops a small opening or pore. Some have stalks. Some are large, some small. Basically, they’re balls that, at maturity, puff out spores.

The complication is that “puffball” isn’t a scientifically definable group. The various puffball genera are not closely related to each other, and most are more closely related to non-puffballs—that makes it unwise to make assumptions about any mushroom based on its puffball status alone. For example, many people insist that all puffballs are safe to eat, an assertion that depends on defining the toxic ones as not really puffballs.

Definitions can get fuzzy in other ways, too. Are earth-stars puffballs? They do produce their spores inside an enclosed ball, but they also have an outer later that splits open to produce a kind of star-shaped collar. What about Birds Nest Fungi? They have tiny spore-production balls growing in groups inside little cups of tissue. Or what about truffles? They’re round, after all. Some writers refer to “true puffballs” as opposed to various false ones, but which species go in which category is definitely a judgment call.

Then there are the mushrooms that look like puffballs when very young but definitely are not. More on them in the section under Toxicity.

The main thing is not to get distracted by the familiar and charming ball-shape into thinking you already know everything you need to about all puffballs.

The general characteristic of puffballs is roundness, but as noted, it’s important to recognize that as similar as puffballs look, they are not really all one group. There are at least 13 genera in five families. Here is a very brief introduction to each puff genus (although please bear in mind mushroom taxonomy changes often). In the next section we’ll go into detail about a few of the more popular and interesting species.

The granular puffball, Arachnion alba[ii], is the only member of its genus. It’s a very small, stalkless, thin-skinned puff, notable for its very grainy interior—curiously, each grain is a separate spore-containing packet, puffs within a puff. Edibility is unclear.

These two genera[iii][iv], sometimes combined into one, are the earth-stars. In some species, the star-shaped collars close up again in dry weather. The genera look very similar but are not in the same family. They are not known to be toxic, but are unpalatable.

The mushrooms of this small genus[v] do not look like puffballs, having a distinct cap and a very long stem. And yet the cap produces spores inside itself, like a puffball, and “puffball” is part of the common names of some of its species. None are considered palatable.

A genus[vi] of classic, stemless puffballs, edible but usually not very good[vii]. Curiously, the stringlike connection between the ball and the mycelium often breaks at maturity, allowing the ball to roll around freely, distributing spores—a tumble-puff!

The genus[viii] name means “pretty mouth,” referring to the raised, red pore from which spores escape at maturity. Some species are stalked, others are not. Some have an outer layer of goo that falls away and collects in a pile as maturity approaches. Generally considered unpalatable.

Another classic puff genus[ix]. Some of these get startlingly large. Some are popular edibles, others are less appealing.

Another classic puffball genus[x]. There are many species, mostly small, mostly thick-stalked, and mostly (but not entirely) edible.

This genus[xi] consists of a single species, M. corium, although the fruiting body can look very different depending on whether it grows underground or above ground. It is edible, though some people react poorly to it.

Another genus[xii] of puffballs that contain tiny, grain-like, puffballs inside them. At least some species may be edible, although few people eat them—perhaps because they look unappealing. At least some can be used to make dye.

The ball of these puffs is shaped rather like a tall, narrow, egg and sits on a long, thin, woody stalk[xiii]. At least some species are described as edible by some writers, though others disagree.

Curiously, the name of this genus also refers to an entirely unrelated chronic disease in humans. In any case, these mushrooms[xiv], often referred to as earthballs, are definitely toxic. Some writers (including, at times, us) define these as not puffballs in order to support the “all puffballs are safe to eat” rule.

These mushrooms[xv] are sometimes called stalkballs, since the fruiting bodies consist of round balls atop very thin stalks. They are very small and considered unpalatable besides.

It’s actually a bit difficult to determine which puffballs are the most popular, since many writers persist in referring to puffballs as if they were a single species. Nevertheless, here are a few often mentioned individually by name. All these are edible (hence their popularity), but please note that all puffballs become inedible once their spores start to mature.

There are actually at least two giant puffball species, though this one is better-known and quite wide-spread[xvi]. It is often roughly ball-shaped, but can be wrinkled or lobed. There is no stalk. The skin is smooth and white. The size alone—these are often bigger than soccer balls, sometimes much bigger—makes them hard to misidentify once full-grown. While this is not the tastiest of the group, its mild flavor is pleasant and versatile. The flesh dries easily to make a powder useful in soups and sauces.

The common puffball[xvii] earns its name, being quite wide-spread. It also has a number of close look-alikes, though reputedly none are poisonous (see the warnings under Toxicity, though). It is relatively small, only about two inches across, white or whitish, and covered with tiny spines and warts—far from being ugly, these give a visual impression of encrusting crystals, hence the alternate common name, gem-studded puffball. The “gems” fall off with age, leaving a lacy-textured surface. As table-fare, the common puffball is not excellent, but if the tough skin is peeled away and the young interior is cooked properly, it can be quite good. Common puffball omelets are particularly recommended by some writers.

This very-small-to-medium-small puff[xviii] is, indeed, shaped like an upside-down pear. Its surface is covered with warts, at least when young, but these are small and not obvious. The surface also starts out white, darkening to brown with age. Brown specimens are too old to eat. Pear-shaped puffball is unusual among puffs in that it grows exclusively on dead wood—it’s also called the stump puffball, for that reason. If it appears to be growing from soil, that means the wood is buried (or the identification is wrong). The pear-shaped is considered only mediocre in flavor, but if peeled and properly-cooked, it can be good. Try frying it with onions. And since this puff usually fruits in huge, dense clusters, it can at least be plentiful.

Yes, the spores of this one[xix] are purple at maturity, but foragers looking for food hope not to see that color—as with other puffs, the purple-spored is only edible when the interior is still white. In fact, this species is considered among the best puffs for the table[xx]. It is large, but not huge, usually smaller than a soccer ball, with skin that can be either smooth and white or textured and brownish. Though round when very young, it often develops a narrowed base so that in profile it comes to look like a bit like a loaf of bread or a muffin. A similar, but smaller mushroom is variously considered a subspecies of the purple-spored or a separate species in its own right, C. fragilis.

As noted, the puffball group is more or less defined by appearance, so the close look-alikes of puffballs are, arguably, puffballs. Alternatively, one could define the puffs very narrowly (for example, only including the Calvatias and the Lycoperdons), in which case groups such as the earthballs become look-alikes. There are also some slime-molds that have a ball-like shape and could be mistaken for a puff.

The big problem is that a number of non-puff species are initially enclosed in round eggs of tissue, looking so much like puffs that the only safe thing to do is to slice all puffs gathered for the table open, to check for tell-tale non-puff structures. Stinkhorns have an early egg stage, but since these are edible (if unpopular), a mistake wouldn’t be a disaster. Amanita eggs, on the other hand, would very much be a disaster, as the group includes the most poisonous mushrooms in the world.

Many puffball species are edible. Like most edible mushrooms, they are healthy to eat, packing a lot of protein and other nutrients in with very little fat and few calories. Details depend on the species. Some reportedly have traditional medicinal uses, though few, if any, are well-known medicinals.

Puffballs are not used as medicine and therefor don’t have a dosage.

The most serious risk with eating puffballs is the possibility of accidentally eating an Amanita egg instead. Such a mistake could kill, depending on the species of Amanita. It is vitally important to learn to tell the difference between the two, and to always check before eating.

The earthball group is known to be toxic (not usually deadly) and could also be mixed up with one of the edible species by the incautious. Earthballs differ from other puffs in being much more firm and in having a spore mass that starts to darken much earlier, at a stage when the edible puffs are still white inside.

Finally, it’s important to recognize that the standard line about all puffballs being good eating is not exactly accurate. Even aside from earthballs, there are many that are simply not palatable, some that are usually edible but bother some people, a few that can accumulate toxic metals, and doubtless some whose edibility is unknown. Even in a group that contains a large number of distinctive-looking edible species, such as the puffballs, there is still no alternative to knowing exactly which species one is eating.