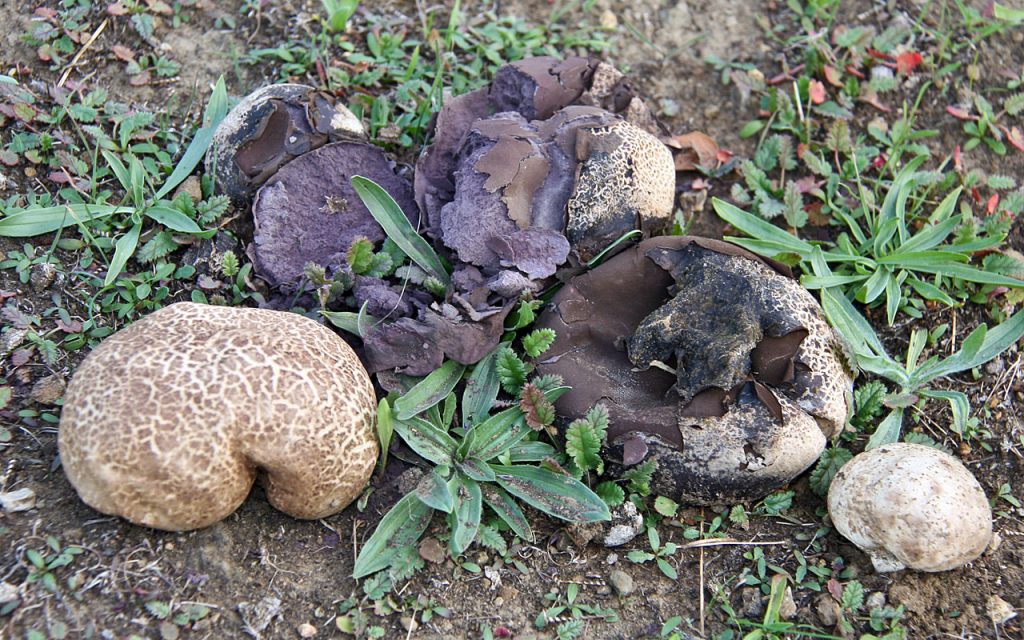 Calvatia Cyathiformis, colloquially known as the purple-spored puffball is a fungus species of the Agaricaceae family. While Cyathiformis means “shaped like a flask”, the appearance of the mushroom is far from resembling a flask. C. Cyathiformis is spherical and smooth on the top.  Also, the mushroom got its nickname from its shape when at maturity. This species is saprobic, that is, it makes use of external digestion to feed on decayed organic matter. This is also why these mushrooms can be found alone in grasslands or only a few at a time.

The C. Cyathiformis fruiting body is around 5 to 20 cm in diameter and 4 to 6 cm long. A young fruiting body is smooth and spherical with a brownish colorⁱ. As it grows, it becomes pear-shaped and has a darker, purplish color. This change in appearance is due to the presence of the gleba at the top of the mushroom. This means that the spores are ready to be released. The exterior of the mushroom then cracks to disperse the spores. What remains of the fruiting body after spore dispersion is a cushion or cup-shaped fruiting body attached loosely to the substrate (the ground).

Some of the microscopic features of the mushroom include spores 3–6 µm globose in shape and covered with spines 0.5–1 µm long. The chemical reaction that occurs on the top of the mushroom entails hyaline in KOH. This mushroom species also has a brown color in Melzer’s reagent. Also, there is the presence of capillitial threads 2–5 µm wide on the spores. The walls of the spores are about 0.5 µm thick. They are smooth and have pits all over them. The hyphae of this species of mushroom merge and narrow down to form a little septum.

This species is typically found in North America, except the West Coast. The wet areas of Australia are also home to the species. They are predominantly present in the southwest of Australia. In addition, the fruiting season of the Calvatia Cyathiformis is during summer and fall.

Calvatia Cyathiformis is an edible mushroom without much flavor of its own but it is still good. Rather, it can absorb other flavors. Moreover, the taste of the puffball mushroom is mild. It has no distinct odor; it smells of earthy tones, typically associated with mushroom.

Cap: no open cap; 5 to 20 cm large and 4 to 6 cm high; yellowish to light brown when young; purple or brownish when mature; smooth and spherical; spore-filled gleba when mature; flaky as it ages
Gills: no gills since it has no open cap.
Stem: no visible stem or stalk.
Smell: no distinctive odor; the typical smell of mushrooms.
Taste: mild taste; absorbs flavors well.
Spores: 3.5 to 7.5 𝞵m; round, spiny to nearly smooth; has a central droplet; pitted; thick-walled; has a capillitium; produced internally.
Spore color: purple to grey deposit
Spore-bearing cells: gasteroid “stomach-like” basidiocarp; spheroidal
Edibility: edible when immature; edible until the flesh turns brownish; not poisonous
Habitat: pastures and grassroots; scattered and gregarious; common in wet areas; can occur in fairy rings in grasslands.
Flesh: white when edible; purple or dark brown when mature; becomes two-chambered when aging

Puffball mushrooms are easy to identify from other mushrooms given their appearance. However, some similar species can be mistaken for Calvatia Cyathiformis. To distinguish between different species of mushrooms, microscopic tests should sometimes be carried out.

This Calvatia has purple spores which differ from other mushroom spores’ colors, which are usually in lighter tones.

One common lookalike is the Lycoperdon Utriforme (now known as Hankea utriformis) another edible mushroom. This particular species of mushroom has round and white caps similar to puffball mushrooms and comes from the same family of fungi. As a matter of fact, the Lycoperdon Utriforme has been coined as the chiseled puffball. The difference lies in the fruit body: pear-shaped for L. Utriforme and spherical for C. Cyathiformis. While L. Utriforme is edible too, distinguishing between the two can be arduous for the layman. It is, however, wise to know the disparities in their outer appearance.

Moreover, a common mistake is to confuse C. Cyathiformis with the Scleroderma Citrinum species. This species, also known as the common earthball or pigskin poison puffball, is a poisonous mushroom. When ingested it causes gastrointestinal distress and rhinitis when exposed to their sporesⁱⁱ. The differences between the two species are difficult to identify for inexperienced mushroom hunters. The white and smooth caps of both mushrooms fuel confusion. However, S. Citrinum has firmer flesh and darker gleba as compared to Calvatia. Mature S.Citrinum can also be distinguished from Calvatia as they open into two to release spores. What’s more, the absence of stem in S.Citrinum is another characteristic that makes it stand out.

The Calvatia Cyathiformis mushroom has numerous benefits. First of all, the mushroom has culinary benefits. One or two of the mushrooms is enough to prepare a dish. The most rewarding part is that these mushrooms can absorb other flavors, hence, they can be paired with other dishes.

Besides having culinary value, the Calvatia species is a tremendous pharmaceutical asset. The use of this species of mushroom by ancient cultures as a wound dressingⁱⁱⁱ gives an insight into its medicinal value. Traditional herbalists have long used mushrooms in their concoctions to treat certain illnesses. In Nigeria, Calvatia Cyathiformis is used to treat leucorrhea and barrennessⁱⱽ. Research into the pharmaceutical benefits of this mushroom is being carried on. If it is true that these fungi can treat such diseases, this would be a giant leap in medicine.

Mushrooms in the like of Calvatia Cyathiformis also produce anti-tumor inhibitors. The experiment was carried out on rats and anti-tumor agents were found in them. The potential to create medicines based on mushroom extract to cure serious diseases is one of the most consequential benefits of this species. Mushroom extracts are doing wonders in the medical field.

Another important benefit of the C. Cyathiformis mushroom resides in its feeding process. External feeding allows for the breakdown of organic matter in the soil into good nutrients that will make the soil more fertile. This characteristic of the mushroom species could be used to naturally fertilize plains and lands for farmers. Cultivating mushrooms near a field could make changes to the soil composition and improve the natural irrigation system. This could benefit the agricultural sector; more viable lands entail greater crop yields and better food. Also, it is worth mentioning that this process also clears up the environment. Sustainably disposing of organic waste through mushrooms has great potential for success.

There is no dosage. However, consuming the mushroom when it is still young is better. The white flesh of the mushroom indicates that it is safe to consume. Otherwise, there is a risk of having an allergic reaction to the mushroom.

Like most puffballs, C. Cyathiformis has no toxicity. However, some people reported gastrointestinal issues after consuming too much of the mushroom at once. The precaution is thus to consume only a small amount of this puffball mushroom. This reaction can also happen if the mushroom has become mature and the spores are starting to disperse. To avoid this, it should be ensured that the flesh is white for it to be fit for consumption.

That is to say, moderation is key. Too much of the mushroom can make you sick. However, the general idea is that C. Cyathiformis can be consumed in small quantities without any health issues popping up. Even pregnant women can enjoy a few bites of puffballs without fear of developing allergies or other health complications.

Nonetheless, there is a caveat. The presence of basidiospores in the air when the mushroom becomes mature can act as an aeroallergenⱽ. People susceptible to respiratory diseases and asthma must refrain from coming in close contact with the mushroom as it releases its spores. The spores in the air can irritate the throat and nose, and trigger severe respiratory distress in vulnerable people. Hence, it is imperative for people to take the necessary precautions to avoid being near the puffballs during fruiting season.