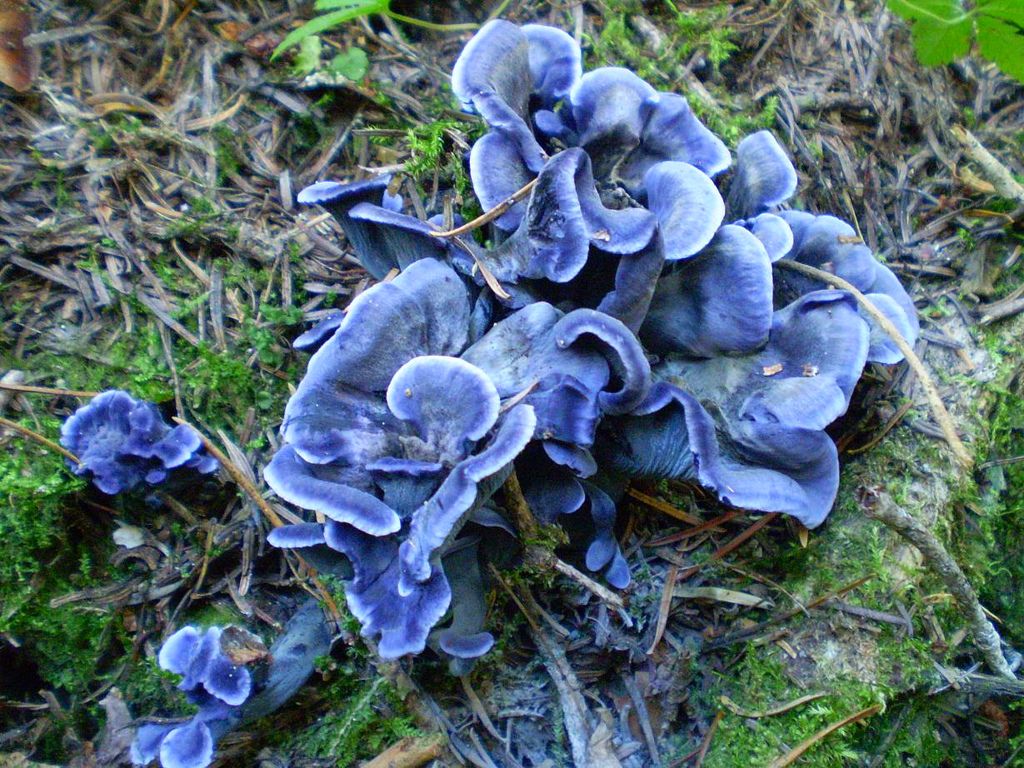 Polyozellus multiplex, colloquially known as the Blue Chanterelle, is a fungus in the family Thelephoraceae. This species is part of a group of fungi known as the cantharelloid mushrooms which also includes the Cantharellus, Polyozellus, Craterellus, and Gomphus. This is due to the many similarities in the fruit body and spore-bearing cells of these different types of fungi. Collectively, the group of Polyozellus multiplex mushrooms is known as the leathery earth fans. The genus Polyozellus is one of its kind. There is only one species in this genus. Also, in Alaska, the mushroom is known as the Black Chanterelle as it can take different colors depending on the region.

The Polyozellus multiplex has a rich taxonomic history with several alterations in its classification. Both the family and genus names were changed over time to finally become Polyozellus in 1910. The mushroom has a disjunct distribution and can be found in North America as well as in East Asia notably in Korea, Japan, and China. This species is ectomycorrhizal, that is, their hyphae grow along with the roots of plants but do not usually attach themselves to the root cellsⁱ. Polyozellus multiplex grows in coniferous forests and is most prominent under spruce or fir treesⁱⁱ. Usually, Polyozellus mushrooms grow in the higher and mountainous regions. They can be rare to find. Also, the color of the fruit body of Polyozellus multiplex can vary. Nonetheless, the usual color is always in the darker shades of purple.

The fruiting season of Polyozellus multiplex is from summer to fall. People harvest these mushrooms for commercial and recreational uses as it is edible and has many health benefits. Polyozellus multiplex is full of bioactive compounds that have tremendous health benefits. Studies have also shown that this species of mushroom has antitumor properties.

Cap: 3-5 cm wide and almost as long; violet to black; whitish edge; white powdery deposit on the surface (spores); has a layer of very fine hairs; lobed and wavy;
Gills: no apparent gills
Stem: up to 5 cm high and 1.5 to 2 cm wide; dark purplish to black in color; smooth and dry surface; fused with other stems at the base; solid or becoming hollow
Undersurface: running down the stem; smooth to wrinkled; the same color as the cap or paler; blackens with age
Fruit bodies: 15 cm long including the stem and 10 cm wide; occur in clusters of up to 1 m wide
Smell: mild
Taste: mild or aromatic
Spores: spherical to elliptical in shape; covered with tubercles; 6–8.5 by 5.5–8 µm; translucent or colorless; can be slightly green; acyanophilous, that is, they do not absorb methyl blue stain; filamentous hymenium.
Spore-bearing cells: 32–38 by 5–6 µm; four-spored
Spore color: white spore deposit
Edibility: edible; not poisonous
Habitat: coniferous woods under spruce and fir; usually at high altitudes;
Flesh: dark violet; soft and breaks easily

Polyozellus multiplex is easy to distinguish among other types of mushrooms. Its dark-colored clusters and wavy caps are recognizable, even to the layman. However, there is a species of mushroom that is very similar to the Polyozellus multiplex. This look-alike is Craterellus cornucopioides, colloquially known as the horn-of-plenty mushroom. It is also known as the black chanterelle or black trumpet. This particular species is of the Cantharellaceae family and is also edibleⁱⁱⁱ. C.cornucopioides has a black fruit body and grows in North America, Europe, and East Asia under beech or oak trees and mossy areas. The only apparent distinction from Polyozellus multiplex is the thin flesh and trumpet-like shape.

Moreover, another species often mistaken for Polyozellus multiplex by non-experts is Gomphus clavatus, commonly known as pig’s ears or the violet chanterelle of the Gomphaceae family. This edible fungus species has wavy edges similar to P. multiplex and can occur in clusters or fairy ringsⁱⱽ. It has a vase-shaped body and is brownish to lilac in color. The feeding technique of both species is also similar. The same applies to their habitat: both P. multiplex and G.clavatus enjoy coniferous forests. The confusion stems from the outer appearance of the fruit body which is wavy in both species. Otherwise, the two species are quite distinct.

The first notable benefit of the Blue Chanterelle is culinary so much so that it is very popular in East Asian cuisine. This popularity has also reached the shores of North America where they are also hunted and consumed. It is best consumed cooked. The culinary use of these mushrooms extends to a panoply of dishes. It can also be preserved by drying the fruit bodies and keeping them in a dry and cool environment.

What is more important is the health benefits of Polyozellus multiplex. This species of mushroom secretes polyozellin which is a chemical used in the treatment of Alzheimer’s disease. This chemical substance inhibits the work of the enzyme prolyl endopeptidase (PEP) which processes the amyloid precursor protein for the onset of Alzheimer’s diseaseⱽ. This ability has rendered this mushroom popular in the pharmaceutical community due to its immense benefits for drug production.

Furthermore, Polyozellus multiplex exhibits antitumor properties. As a matter of fact, ingesting the mushroom may have benefits that help fight stomach cancer as it acts as a suppressor and powerful chemopreventive agentⱽⁱ. The mushroom has enzymes that have potential to protect the body against cancer. These enzymes include glutathione S-transferase and superoxide dismutase. Polyozellus multiplex also increases the concentration of glutathione, a substance that is an antioxidant that prevents cellular damage. Moreover, consuming this mushroom may increase the protein production of p53, also known as the Guardian of the Genome, an important tumor antigen that may help prevent cancer.

Although Blue Chanterelle has numerous health benefits, it is not widely known or used as a medicinal plant. However, only a low concentration of around 0.5% to 1% is sufficient to kick-start the production of useful enzymes in the body.

The Polyozellus multiplex mushroom is not poisonous or toxic at all. It is considered safe for consumption and thought to have little to no side effects or interaction with drugs.