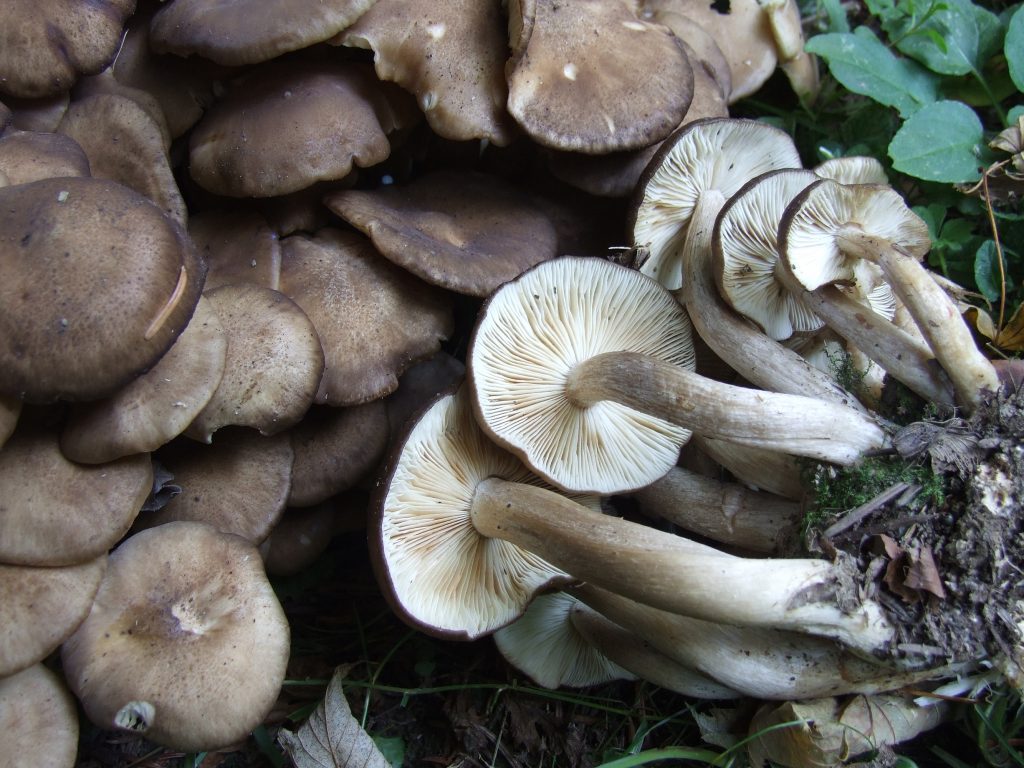 L. decastes bears the common name, fried chicken mushroom, in recognition that it is a popular edible—though, curiously, not one thought to resemble chicken. Although treated here as a single species, it is probably actually a group of at least four or five species[i]. Though physically variable (as one might expect of a species group), this mushroom is notable for a few characteristics, among them its habit of fruiting in large groups. Anecdotally, these are usually groups of ten, and in fact the species epithet, decastes, means “in tens.”[ii] Whether the clusters are really groups of ten more often than not is unclear—it’s the sort of charming detail easily subject to confirmation bias.

Cap: Small to largish, smooth, most but not slimy, variable in color from whitish to gray-brown to yellow-brown to brown, usually paler with age. The interior flesh is white and does not change when cut open.
Gills: White or, in some older specimens, yellowish. Attached to the stem, but may be notched. If not notched, may run partway down the stem.
Stem: Mostly whitish, sometimes with a brownish base, tubular, smooth, and dry.
Smell: Either not distinctive or fragrant.
Taste: Sometimes, but not always, radish-like but pleasant in any case,
Spores: Round or almost round, smooth.
Spore color: White
Edibility: Edible with caution.
Habitat: Grows in disturbed soil, including roadbeds. Fruits from the ground, usually but not always in large, multi-stemmed clusters.

This species (or group of species, as the case may be) is variable, but reliably has a couple of consistent characteristics[iii]. These include a white (not “whitish”) spore print, fruiting in dense clusters from the ground, and white or yellowish gills. Important microscopic features include round or roundish, smooth, inamyloid spores, a lack of cystidia on the gills, and basidia that appear granular inside with acetocarmine.

L.decastes as currently defined is likely its own look-alike in as much as it is probably more than one species. But since the new species are not clearly defined yet, there is no guidance on how to tell them apart or which, if any, share a range.

In any case, L. decastes as a whole has few if any close look-alikes, but as it is both rather non-descript and highly variable it could be confused with many species. The important thing is to match all characteristics, not just a general “look.”

L. decastes is well-known as an edible (despite some caveats; see the note under Safety) but the stem especially can be tough, and may be a better choice for stews and purees. It tends to thicken broths. The flavor is good, somewhat resembling that of a shitake, but few people consider it excellent. Nutritional information is not easily available, but most mushrooms that are not toxic are healthy to eat.

The species is used in Japan for bioremediation. Some possible medicinal benefits are claimed for the species, but have not been tested in humans. The species does not appear to be a traditional medicinal and is not commonly used[iv].

L.decastes is not currently used as medicine, so there is no established dosage.

L. decastes is a common edible, but can sometimes cause gastrointestinal distress. It’s not entirely clear why it sometimes causes a problem but sometimes does not. Some writers recommend not eating this species at all.

Since L. decasters as currently defined is probably actually a group of species, it’s possible that some in the group are toxic and others are not.  Until the matter is resolved, it is best to used caution.

There is also the danger of misidentification. Although there aren’t any very close look-alikes that are toxic, there are several toxic species with which confusion is possible, especially for inexperienced or over-confident foragers. It’s important to always go to the trouble of full, careful identification, without skipping steps, and for inexperienced people who have not yet sensitized themselves to perceiving the fine details of mushrooms to get help from more practiced foragers.