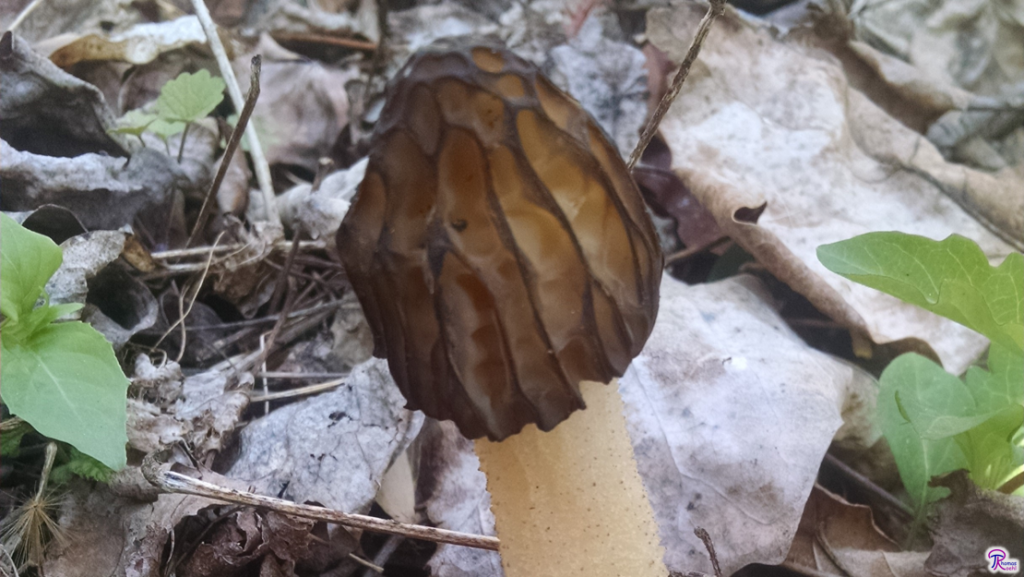 Half-free morels are simply a small subgroup of morel mushrooms known for their odd shape; as the name implies, the cap is only partially fused to the stalk. They are edible, but not considered as choice as their relatives[i].

But there’s a lot of confusion about the exact relationship between half-frees and other morels. Some writers make them sound like basically the same thing, while others contrast the half-frees with the “true morels.” It doesn’t help that half-frees and Verpas, a morel look-alike, are sometimes lumped together as “peckerhead morels,” a rather crude reference to how they look[ii]. So if you already know about morels, how much does that tell you about half-frees? Are they alike or different?

To resolve that confusion, it really helps to take a quick dive into scientific classification and how scientific names work.

All living things fit into a classification system with eight main levels: kingdom, phylum (or division), class, order, family, genus, and species. For example, human beings belong to the animal kingdom, the chordate phylum, the mammal class, the primate order, the hominid family, the human genus, and the modern human species (we’re the only extant species in our genus, so we haven’t bothered to give ourselves a distinctive name. We’re just us). The reason why this is important—and relevant—is that the way people normally talk about living things obscures the real relationships between species or groups of species.

For example, people often refer to lions as “cats” because of their obvious similarity to house cats, but if you didn’t know what a lion is already, describing it as “related to house cats” wouldn’t give you any idea of how closely related they are. You might imagine something like an African wildcat, basically a fiercer version of our familiar tabbies. On the other hand, explaining that lions are members of the same family as house cats but not of the same genus warns you to expect some major differences.

It’s true that real life doesn’t fit neatly into the system, so at each level there can be sub- and super-levels, like subspecies or super-families, but by remembering the basic pattern, kingdom, phylum, class, order family, genus, species, it’s possible to keep everything straight. The mnemonic, “King Phillip Came Over For Gramma’s Soup,” really helps with remembering the order.

So, while there is a morel family, all true morels also belong to the same genus, Morchella. And the half-frees are three species in Morchella. They are thus true, honest-to-goodness, morels[iii]. They just have odd stems.

There are three species of half-free morels, two of which grow in North America. They are exactly alike except on a genetic level, so the fact that there are multiple species is really only of interest to specialists (and, presumably, to the half-frees themselves). Until relatively recently, the American populations were thought to belong to the European species, so it’s possible to find all three names used with respect to American half-frees.

Regardless of their name, like all morels, the half-frees look a bit like a thimble on a finger, having a narrow, bell-shaped cap hanging down around a central stem. There are no gills or pores. Instead, the outer surface of the cap is deeply pitted, and it is from those pits that the spores are released. The stalk is hollow. In most morels, the cap is entirely fused to the stem. In the half-frees, the lower half of the cap hangs freely.

It’s difficult to check the cap’s connection to the stem without cutting the mushroom open vertically. More accessible identification marks[iv] include the relatively long stem on mature specimens (most morels have very short stems), pits that are paler than the ridges between (the whole cap darkens with age until the ridges are nearly black), and pale, mostly cylindrical stems that may be either smooth or bumpy. In wet weather, the base of the stem may swell and get wrinkly.

Half Free Morels vs Verpas

The Verpas, also known as early morels, are a separate genus of mushrooms that, like the half-frees, have a long stem and a small, thimble-shaped, pitted cap. As might be suspected by their being in a different genus, they are not considered true morels. They differ in having a cap entirely free of the stem except at the very top, the way a bell is free of its clapper, and also in having a stem filled with cottony material.

True morels, including half-frees, are generally considered edible, but Verpas are not. Nonetheless, many people do eat Verpas without difficulty, while some people react badly to true morels—it’s possible that the reports of toxicity in Verpas is the same as that reported in morels[v]. The safe conclusion seems to be that the question of their edibility appears not to have a consistent, reliable answer as yet.

Are Half Free Morels Edible?

Half-frees are just as safe to eat as any other morel—which is to say most people who eat them are fine, but some people are not. Most edible mushrooms, including morels, can cause gastrointestinal upset if improperly cooked, if eaten by people with an unusual sensitivity, or if eaten in excess. Morels can also sometimes cause neurological problems[vi]. Symptoms can include dizziness, poor coordination, and a kind of drunken feeling. The problem is quite rare and also quite temporary, but sounds scary and unpleasant. Presumably, half-free morels can cause the same types of issues.

Morels can be bought dried in some stores, but many enthusiasts gather them in the wild, often from secret locations jealously guarded from competitors’ eyes. Gathering mushrooms carries the risk of misidentification. The primary look-alikes of morels are the so-called false-morels, mostly members of the genera Gyromitra and Hellvella, notable for having wrinkled, rather than pitted caps. Some false morels are regularly eaten (on purpose) by many people, despite making other people very, very sick. Most experts advise against eating them at all. Some species of stinkhorn can also look very similar ti half-free morels especially (they, too, have a long stem and a narrow cap) once most of the slimy, spore-bearing gleba is removed by flies. There is usually a little gleba remaining, though, plus stinkhorns have a cup of tissue at the base, the remnants of the universal veil. Anyway, stinkhorns are edible, though most Americans seem not to like them.

Half-free morels are not considered as tasty as other morels, but are still quite enjoyable to eat, especially when cooked with cream. For foragers, they have the advantage of coming out early, before other morel species are available.