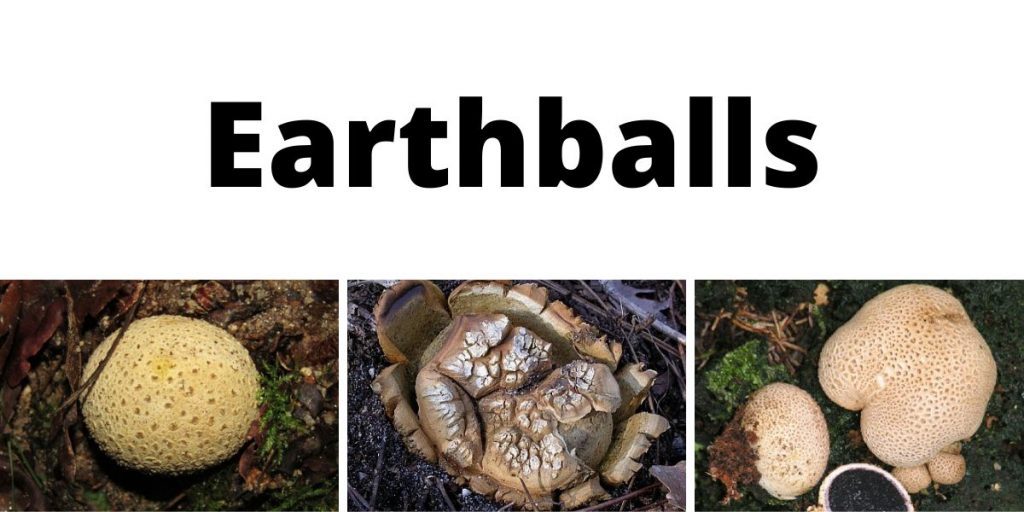 “Everybody knows” that all Puffballs are edible—says so right in a lot of introductory mushroom foraging articles. Unfortunately, “everybody” is wrong. The Earthballs are a group of poisonous puffballs. They won’t kill you, but if you eat one you’ll wish you hadn’t. Learning to identify Earthballs is one of the most important things people who wish to eat Puffballs must do.

Puffballs are all those mushrooms that hold their spores inside a ball-shaped structure. At maturity, the spores are released either through a pore on the top or by rupture of the skin. Some have stalks (mostly short), others don’t. Once, the Puffballs were treated as a taxonomic group. They are so no longer. Molecular and genetic studies have made clear that several groups groups of fungi have evolved the Puffball shape, and these groups are not at all closely related to each other. Since “Puffball” is no longer a technical term, it can be difficult to be sure which mushrooms actually should be called Puffballs and which should not be. There are writers who insist on referring to the Earthballs as “false Puffballs” as a result, though they are ball-shaped and do puff.

But which are Earthballs is itself somewhat hazy[i]. Certainly the members of the genus, Scleroderma are Earthballs (note that there is also a skin disease of the same name, but it has nothing to do with Earthballs). But Scleroderma belongs to the family, Sclerodermataceae, the other members of which are more or less Earthball-like as well. And there is a single species in the Diplocystaceae family that is earthball. Both families belong to the same suborder, Sclerodermateae, but so do two families of boletes. All of these earthball-like species are sometimes referred to as Earthballs, though some differ from the others in various ways and to various extents.

In this article, to keep things simple, we use the name, Earthball to mean only the members of the genus, Scleroderma, but much of what we say here is also true of the other members of the wider group.

The most known Earthballs are:

There are around two dozen Scleroderma species worldwide, and most of them can be found in the United States, but proper identification depends on microscopic examination is the spores[ii]. It’s not that all Earthballs look exactly alike, it’s that enough of them look enough like at least a few other Earthballs that unless you’re going to look at their spores through a microscope, you can’t really be sure which Earthball you’ve got.

For most casual mycophiles, it is enough to know that you’ve got some time of Earthball, and fortunately that’s not difficult to figure out. They all have certain traits in common.

Earthballs are ball-shaped, generally without a stem. Some fruit partially underground, as if they were trying to be truffles but didn’t quite make it.

They have no pore at the top and instead release spores by splitting open. When young, the interior mass (called gleba) starts out white but begins to darken very early in the mushroom’s development, soon becoming purple or purple-black. The immature gleba is not quite homogeneous but consists of tiny, dark spheres called locules densely-packed within a pale matrix. By maturity, the locules will have ruptured, and the gleba will have become a homogeneous mass of dark spores. The gleba is surrounded by a thick, tough rind. In some species, the outer surface of the rind is covered by wartlike structures.

All Earthballs are mycorrhizal, meaning they grow in mutually-beneficial partnership with plant roots. Some have been added to soil specifically to encourage plant growth. Many, perhaps all, are poisonous. None are edible.

As noted earlier some other members of the family and sub-order to which Earthballs belong have some Earthball-like characteristics. Most of them are not edible, either. But the look-alikes that concern most people are the edible Puffballs. A quick, fairly reliable way to tell these two groups apart is that Earthballs are firm, rather like a rubber ball, whereas the two genera of edible Puffballs are soft, like marshmallow. The edible puffs also have thinner skin. Interestingly, the edible Puffball genera are not mycorrhizal, so it may be possible to notice some habitat differences.

The edible Puffballs are also white inside, until their spores begin to mature. Earthballs do start out white, but very soon get very dark. To cut a “delicious-looking” puffball open and find its interior purple-black is certainly a dramatic way to find out you’ve harvested the wrong mushroom, but looking at gleba color won’t help with an extremely young Earthball, and anyway it’s better to avoid harvesting the wrong mushroom to begin with.

An Earthball could be mistaken for an Amanita in its early “egg” stage, or for one of the stinkhorns, as they also have an egg stage. And indeed some Amanitas and at least most Stinkhorms are safe to eat and are sometimes harvested in the egg stage. Simply slice the ersatz egg open vertically before eating, as the internal structure is extremely different.

It’s not clear whether all Earthballs are poisonous, though none are considered safe to eat. None are known to be deadly, but symptoms can include severe diarrhea, stomach cramps, vomiting, and, in severe cases, muscle rigidity[iii]. Onset can be as quick as ten minute, or it can be delayed for up to five hours. The toxin responsible isn’t known. Anyone who suspected they have eaten earthball should call a poison-control center immediately—save a sample of the mushroom, if possible, to confirm identification.