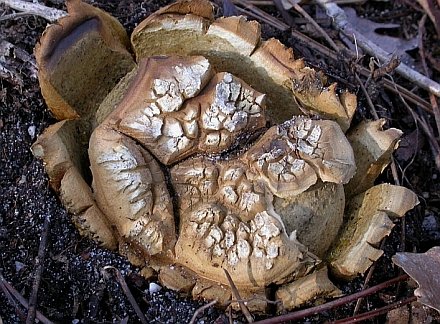 This mushroom is on the red list of threatened fungi in Japan.

Use in traditional medicine

The fruitbodies of Scleroderma polyrhizum have been used in traditional Chinese medicine for the treatment of detumescence and hemostasis (Gong et al., 2005).

Three nitrogen compounds have been isolated and purified from the fruit bodies of S. polyrhizum, determined to be N,N-dimethylphenylalanine, 2-N,N,N-trimethyl-phenylalanine, 2-trimethyl-ammonio-3–(3-indolyl)propionate (Gong et al., 2005).

Fruit bodies have also been shown to contain the steroids ergosta-4,6,8(14),22-tetraen-3-one and ergosterol peroxide (5α,8α-epidoxyergosta-6,22-dien-3β-ol) as well as the fatty acids palmitate and oleate (Gonzalez et al., 1983). Ergosterol peroxide is a known major anti-cancer and antiinflammatory sterol produced by a variety of medicinal mushrooms (see for example Takei et al., 2005 or Kobori et al., 2007).