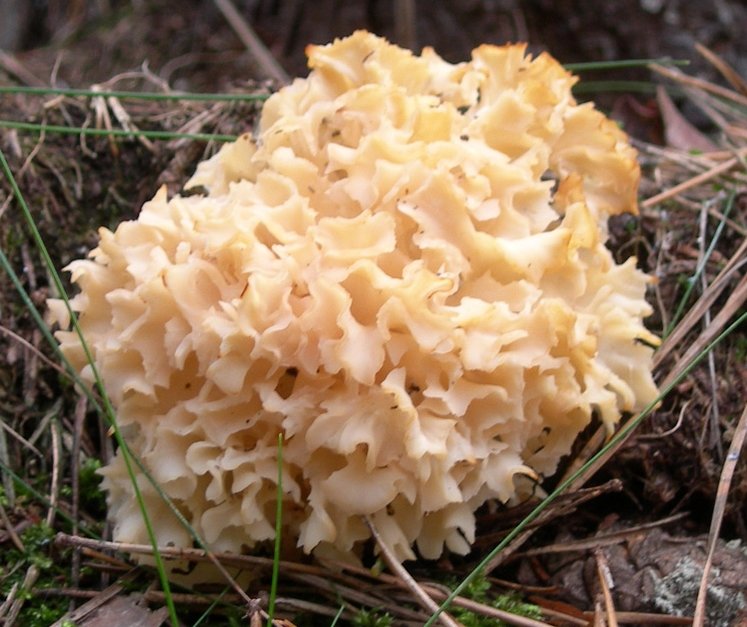 Fruiting body:  5-20 cm tall, 6-30 mm across, although it can be even bigger, and sometimes reach a weight of 6 kg. Its overall shape is irregularly spherical or elliptical, with a thick, fleshy base from which leafy branches grow and develop. The branches are partially fused, both sides are covered by hymenium. The edges of the wavy or curled lobed leaves are toothed. At first they are whitish, later yellowish and when old they become orange-yellow to yellowish-brown. The base of the stipe is almost black.
Flesh: waxy, flexible, white, with a pleasant smell, tastes nutty, according to some references.
Spore print: yellow to yellow-orange.
Spores: 5-7 x 4-5 µm; elliptical; smooth; light yellow.
Habitat: grows from August to October in coniferous woods, usually close to the roots of pine trees. Widespread in northern temperate zones worldwide.

Polysaccharide fractions have been prepared from cultured Sparassis crispa by repeated extraction with successive treatments of hot water, cold alkali, hot alkali, and then further fractionation using ethanol precipitation. Various types of chemical analysis show that the polysaccharides obtained in this way are 6-branched 1,3-β-glucans, with one branch in approximately every third main chain unit. The β-glucan preparation from S. crispa (‘SCG’) not only shows antitumor activity to the solid form of Sarcoma 180 in mice, but also enhances the hematopoietic response (Ohno et al., 2000). This enhanced response is due at least partially to an increased ratio of natural killer cells and γΔ T cells in the liver, spleen and peritoneal cavity. Further, mice fed SCG had reduced CD4+ and CD8+ cells in the thymus, and enhanced IL-6 production, highlighting the possible importance of cytokine IL-6 for SCG’s anti-tumor effects (Harada et al., 2002a).  These researchers also showed that SCG works synergistically with soy isoflavone aglycones, a class of compounds touted as possible cancer-preventing agents (Harada et al., 2005). When both compounds were taken together orally, they synergistically increased the number of white blood cells and spleen weight. The increased spleen weight was at least partially due to an increased number of monocytes and granulocytes.

To investigate its effect on cytokine production, SCG was tested in vitro with human blood (Nameda et al., 2003). In this study, SCG was shown to activate human leukocytes, with the following specific effects:

SCG was also found to induce interferon-gamma (IFN-γ) and interleukin-12 p70 production in mice (Harada et al., 2002b), as well as tumor necrosis factor-alpha (TNF-α) and granulocyte-macrophage colony-stimulating factor (GM-CSF) (Harada et al., 2004). Cell to cell contact and soluble factors are important for cytokine induction by SCG (Harada et al., 2006a). These authors specifically suggest that increased levels of GM-CSF and dectin-1 (a β-glucan receptor) expression are crucial elements of this induction (Harada et al., 2006b).

Apparently, β-glucans are not the only compounds with antitumor activity in S. crispa. Yamamoto et al. (2007) checked out the β-glucan free low-molecular weight fraction from a hot-water extract of fruitbodies. Feeding these low-molecular compounds to mice had the multiple effects of suppressing tumor growth, increasing IFN-γ production, and reducing the growth of new blood vessels that usually accompanies tumor growth (angiogenesis).  It is suggested that the low-molecular weight compounds enhance the Th1-response in tumor bearing mice (Yamamoto et al., 2007).

Sparassis crispa produced three antifungal compounds in submerged culture, including the previously known sparassol (methyl-2-hydroxy-4-methoxy-6-methylbenzoate). (Side note: sparassol earns a mention in the silly-sounding molecule webpage!) The other two compounds, ScI and ScII, had greater antifungal activity than sparassol against Cladosporium cucumerinum, and were characterized structurally as methyl-2,4-dihydroxy-6-methylbenzoate (methyl orsellinate) and an incompletely determined methyl-dihydroxy-methoxy-methylbenzoate, respectively (Woodward et al., 1993).

S. crispa was one of several mushroom species whose hot-water extract inhibited HIV-1 reverse transcriptase over 50% at a concentration of 1 mg/mL (Wang et al., 2007).

A dichloromethane extract proved to be antibacterial towards Bacillus subtilis and Escherichia coli, and molluscicidal towards Biomphalaria glabrata (Keller et al., 2002).

Kawagishi and colleagues recently (2007) isolated a novel bioactive compound, as well as a compound known previously to exist in Antrodia camphorata. Both compounds inhibited melanin synthesis by melanoma (skin cancer) cells, and both also inhibbited the growth of methicillin-resistant Staphylococcus aureus.