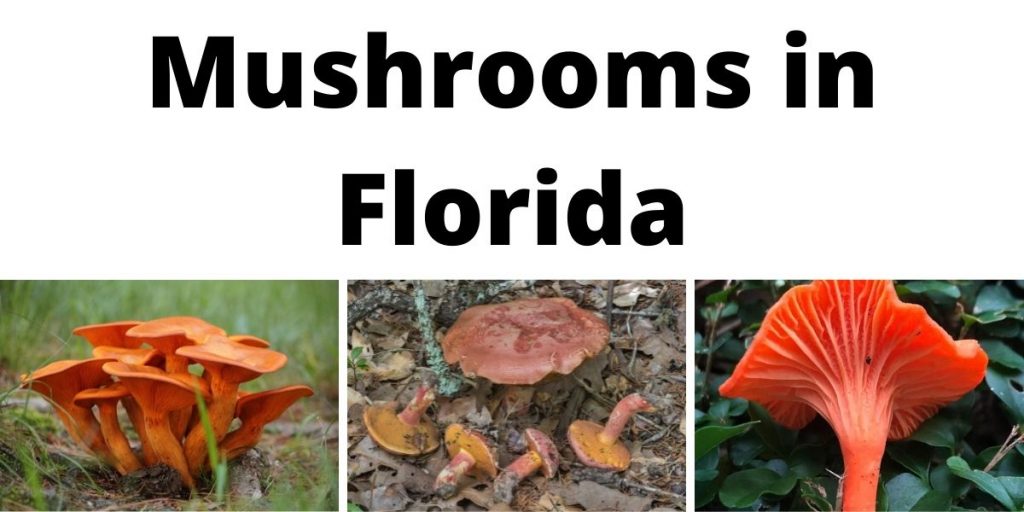 Florida combines a warm, almost winterless climate with abundant rain—basically perfect for many mushroom species. The long, skinny state also stretches so far south that it can support species not usually found in the rest of the United States. For example, there is the Florida fungus (Clathrus crispus)[i], a Caribbean species that looks like a pink Wiffle ball (it has a more northern look-alike, but the difference is noticeable). It may actually be edible, but no one seems to want to try it.

There is no way to list all of Florida’s mushroom species in one article, but we can explore a few of the more interesting species.

Our Recommended Field Guides for Florida

In Florida, as elsewhere, “edible mushroom” is something of a moving target in that there are a lot of species that can be safely eaten by some people sometimes, while making other people—or even the same people—sick at other times. It’s not always clear why. Then there is the issue of poisonous look-alikes, another difficult subject, given that what looks alike to a beginner might look very different to an experienced collector. As a result, the list of edible mushrooms varies a bit, depending on whom you ask. Is this look-alike so close both species ought to be avoided, just in case? Is this other species an edible that makes some people sick, or a poisonous species that some can eat safely? It’s hard to know where to draw the line.

Here, we explore a couple of Florida’s edible species, but bear in mind, not all of them are entirely safe. 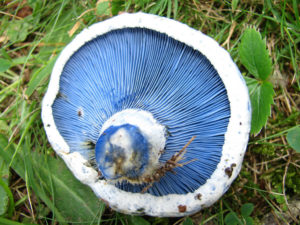 The indigo milk-cap[ii] is, as the name implies, blue. It is entirely blue all over. Slice the gills with a knife and they ooze a blue liquid, the “milk” of the “milk-cap.” The color usually fades a bit during cooking, unless the mushrooms are pickled or blanched first—techniques that tend to fade the otherwise rich flavor instead. 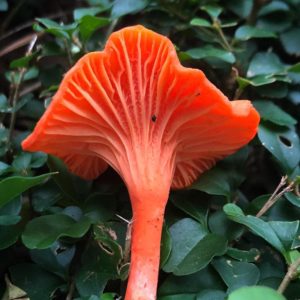 Cinnabar, or red, chanterelles[iii] can be anywhere from pink to orange in color, making them difficult to mistake. They are smaller, sometimes much smaller, than the better-known golden chanterelles, but similarly excellent in flavor. Both species often grow together, generally in pine woods. 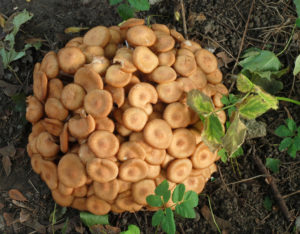 The ringless honey has a lot of of look-alikes, but all of them have rings. The name, honey, refers to the color, not the taste, though this and others in the same genus are popular edibles. Some people apparently have a sensitivity to some members of the Armillaria genus and get sick from eating the mushrooms. As a result, some writers recommend that the entire genus should simply be treated as toxic[iv]. Those who take the risk will find this species does have one advantage; it fruits in enormous clusters. 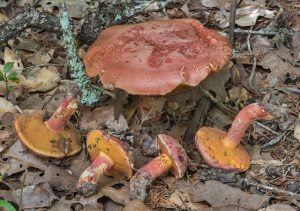 This richly-colored mushroom[v] has two unusual distinctions. One is that its taxonomy is being reworked to the extent that its scientific name has changed multiple times in recent years and could change again.

The other is that it breaks the rules for edible mushrooms[vi]. The Florida has pores instead of gills, a feature that, combined with its classic toadstool shape, originally placed it in the genus, Boletus. Since then, as mycologists developed a greater awareness of mushroom diversity, Boletus was split us into many new genera, but “bolete” is still the popular name for the group. And “everyone knows” that boletes that stain blue and have a red or yellow pore surface shouldn’t be eaten—but in the case of the Florida, “everyone” is wrong. Its flavor is rather sour, but it’s quite safe to eat and could add interest to a multi-mushroom meal. Just goes to show such rules aren’t worth much. The species was first discovered in Florida, hence the name[vii]. Its distribution is mostly Southern. 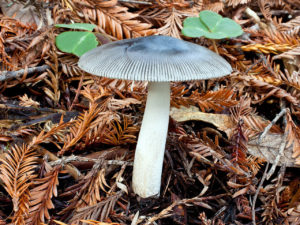 “Grisette[viii]” means “little gray one.” The word refers to an inexpensive, gray cloth and, by extension, once also referred to the young, working-class French women who wore it. Whether the mushroom got the name simply because it is gray or because it is also small, pretty, and does not wear a ring is not clear (the second part of the scientific name is not any reference to women, by the way; it’s Latin for “covered by a sheath”). There are several species of grisette mushroom, all of them ringless. The grisette is edible, though not considered choice. We can’t recommend anyone eat it, either, since one of its look-alikes is one of the most dangerous poisonous mushrooms in the world, the death-cap. It’s included here because it is an edible Amanita, and you don’t get to see those every day!

Yes, psychoactive mushrooms grow wild in Florida, and yes it is illegal to harvest and use them—although prosecutors must prove criminal intent, meaning that the mere possession of a psilocybin-containing mushroom might not be a ticket to prison if it’s legally plausible the collector didn’t know what the mushroom was[ix]. It’s best not to test this loophole, though. The following is a partial list of “active” species found growing in the state[x]. Please do not use this information to get sent to prison. 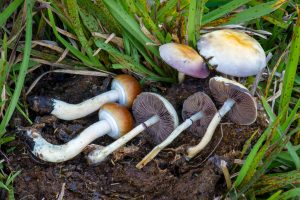 The genus, Psilocybe, includes the best-known, and probably most-popular psychoactive mushroom around, P. cubensis. It is easily cultivated, and exists in a great variety of cultivars—because many people don’t know the difference between a cultivar or strain and a full species, or even a genus, it can become difficult to tell just what mushroom species psychonauts are really talking about. But wild P. cubensis does grow in Florida. An extremely rare relative, P. mammillata, has also been found in Florida, but as it is an endangered species likely to be further imperiled by climate change, it should not be disturbed if found[xi]. Psilocybes as a group are “little brown mushrooms,” or LBMs, a large category of confusing look-alikes that also includes at least one deadly species. Extreme care must be taken when gathering from the wild.

Florida has at least four psychoactive species in the Panaeolus genus. The common name for the group is “mottlegill,” because of the color variation on the gills. Other than gill color, these tend to look very much like Psilocybes and to produce a similar experience when eaten, though the potency varies considerably with species. Like the Psilocybes, these are “little brown mushrooms,” so care must be taken not to mix them up with dangerously toxic look-alikes. Florida’s four are P. cinctulus, P. firmicola, P. chlorocystis, and P. cyanescens.

The Jims, as they are sometimes called by their friends, do contain varying amounts of psilocybin, but they may also have another active ingredient as well because the high they produce is often qualitatively different than that of the more popular magic mushrooms. Jims also look distinct, being yellow or orange or reddish-brown, rather than brown to gray. Florida has at least three species, G. luteofolius, G. luteoviridis, and G. luteus.

There is no easy way to tell whether a mushroom is poisonous, no “tell” that all poisonous species have and no edible ones do. There are people who will tell you otherwise, giving easy-to-remember rules about which mushrooms can be safely eaten, but all such rules have exceptions. The only solution is to simply become an expert in mushroom identification—not a burdensome demand for those who truly love mushrooms!

Destroying angel will, simply put, kill you if you eat it. That is, there are survivors, but don’t count on being one of them. The poison is slow-acting, too, making diagnosis difficult—poisoning victims might not realize the mushroom they ate days earlier had anything to do with their illness. There are several Amanita species native to Florida. Some are edible, some are very much not. It’s usually best to leave the entire genus untouched. Many are interesting to look at, though.

The false parasol is usually described as the poisonous look-alike of several edible parasol species, but the truth is a little more complicated. The thing is that some people eat this species safely, provided it is well-cooked and not picked too old. Also, some of the supposedly edible species are known to sicken eaters, especially if not thoroughly cooked or if picked too old. It seems to say that parasols as a group (including the “false” one) are sometimes edible and sometimes not, but this species is more likely to sicken than the others, and more likely to sicken than not. Poisonings are generally not deadly, but are extremely unpleasant.

Jack is famous for two things: glowing in the dark and poisoning people who mistook it for a golden chanterelle. The glow is faint and hard to see, however, and the resemblance to chanterelles is slight, provided the forager is paying close attention. Unfortunately, Jack is quite similar to both the edible ringless honey and some of the “magic” Jim species. The poison can kill those who are already suffering from some other problem. Everyone else just gets an extremely bad experience. 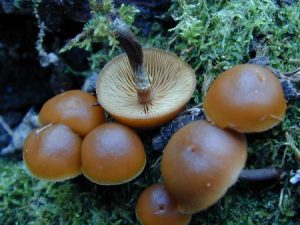 The Deadly Galerina is a nondescript little brown mushroom. Unfortunately, so are lots of other species humans like to chew and swallow for one reason or another. Chew and swallow a deadly galerina, and you will almost certainly die. Again, the poison is slow-acting, making diagnosis difficult.

Can you find Morel Mushrooms in Florida?

Morels do exist in Florida but they are incredibly rare and not worth targeting.