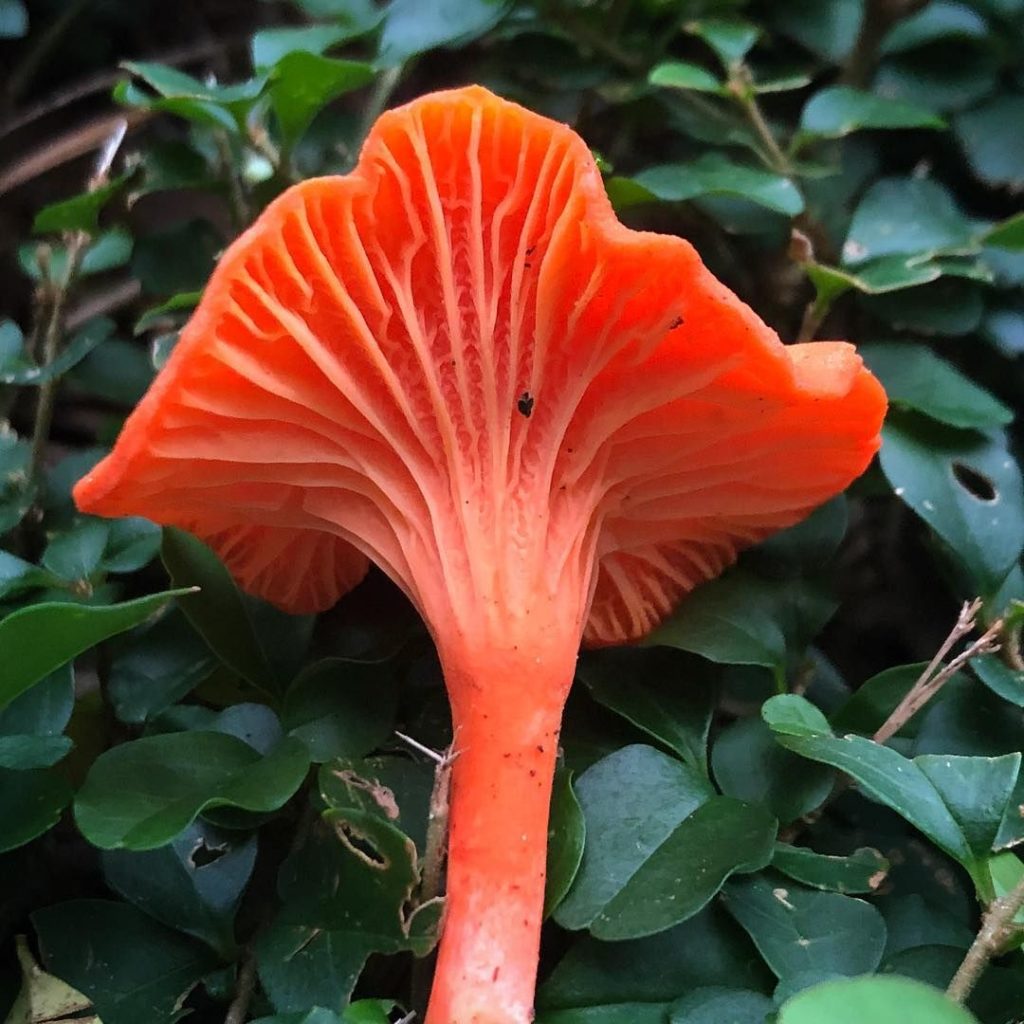 Cinnabar Chanterelle is a small but striking fungus that is native to Eastern Northern America. It ranges in color from a bright flamingo pink to rusty or bright orange and red. This is why this mushroom is also called Cinnabar Red, Fire Chanterelle, Cinnabar Red Chanterelle, or Red Chanterelle. The red coloration is produced by carotenoid canthaxanthin. This makes it a popular and very beautiful mushroom. The different species of Chanterelle mushrooms are found worldwide however, the Cinnabar Chanterelle is located in E.N America. The name Chanterelle originates from a Greek word meaning cup or tankard, kantharos; this is due to their cup-like shape. The scientific name for this fungus is Cantharellus cinnabarinus.

Chanterelle mushroom reportings date back to the 1500s. However, they gained popularity in French cuisine in the 1800s. At this time, it was usually only found in the kitchens of the aristocrats. They are now much more commonly eaten across the globe. In 1836 Elias Fries, a Swedish mycologist said of Chanterelle mushrooms were “one of the most important and best edible mushrooms.”

The Cinnabar Chanterelle is edible, but it holds quite a lot of water (up to 90%), so are often eaten using a ‘dry sauté’ method without any butter or oil. Some suggest that cooking in butter can make them taste sweeter.  Other people cook them with cream, and in soups or soufflés, it really is down to personal preference. They are not usually eaten raw as their flavors are brought about through the cooking process.  Chanterelles are frequently dried and can retain flavor and texture following this process. They may be re-hydrated prior to cooking or ground down to be used as a seasoning.

Cap: Smooth texture, no ornamental features. From pink to a bright orange or red. Mostly round; smooth and dry; convex with rolled under edges, turning flatter with maturity; develops lobes and wavy edges. 1 to 4 cm in diameter. 2.5 to 6cm tall.
Gills: False gills traveling down the stem; forked folds and ridges with blunt edges; cross-veined. Well-spaced folds and same color as cap or paler.
Stem: Tapers down. May be off center. Same color as the cap but paler base; smooth.
Smell: Fragrant and sweet; fruity like apricots.
Taste: Spicy or mild peppery.
Spores: Elliptical. Smooth.
Spore color: White to light pink.
Edibility: Edible.
Habitat: On the ground of hardwood forests such as beech and oak. Grow near the edges of woods. Fruits Late June to August. Can grow alone, scattered, or in groups.

The Scarlet cup is similar to Cinnabar chanterelle, but this fungus fruits on dead woods and twigs. In comparison, Cinnabar Chanterelle fruits from the soil.

The Jack-o’-lantern mushrooms have been incorrectly identified as Chanterelles. They are the color of pumpkins and it is important to chec,  because Jack-o’-lantern mushrooms are poisonous. They can be identified by their true gills which are not forked like those of the Cinnabar Chanterelle. Always seek advice from a professional mycologist if planning on consuming mushrooms.

Cantharellus texenesis is found in Texas and Florida. It has a fatter stem than Cinnabar chanterelle, but the difference is not always obvious. Correct identification requires microscopic analysis. Location can determine the species as Cantharellus texenesis, which is found in Texas and Florida, only not Eastern Northern America like Cinnabar chanterelle.

Cantharellus coccolobae can be much brighter than Cinnabar chanterelle, but the former is found growing in Puerto Rico.

The Cinnabar chanterelle is an edible mushroom, there are no reported medicinal benefits in the scientific literature.

The Cantharellus cinnabarinus is not toxic. Although suitable dosages of this mushroom are not reported, when trying for the first time, always try a small sample to avoid a potential allergic reaction.

There are no safety warnings to accompany Cinnabar chanterelle. It is edible and non-toxic.