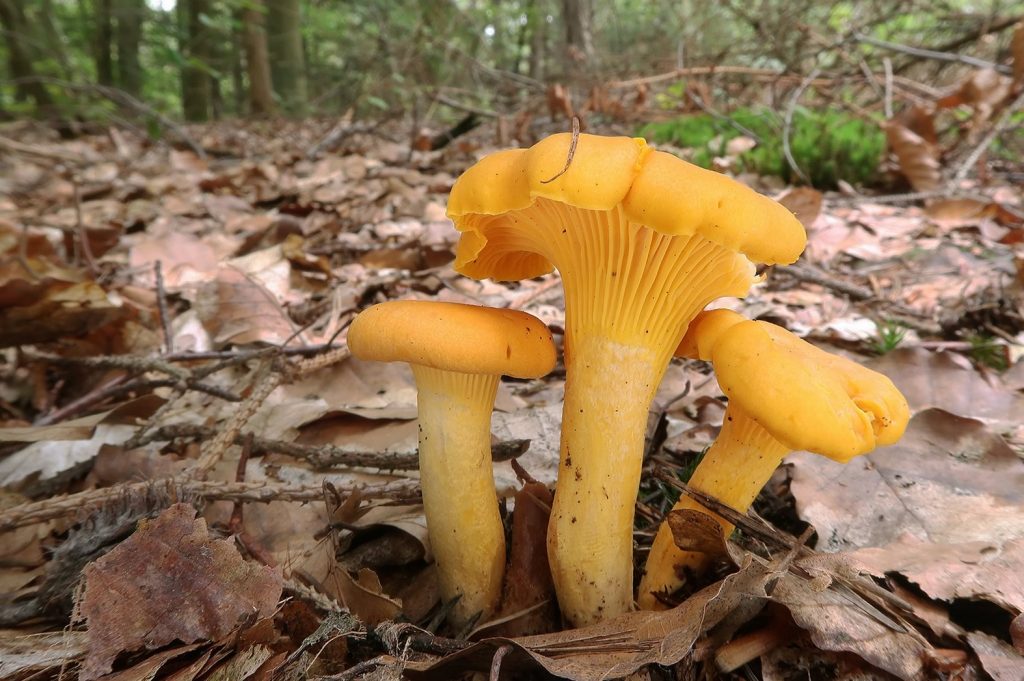 Cantharellus cibarius is a species of golden chanterelle of the Cantharellaceae family. It is the most popular edible mushroom across almost every continent. The species is known as the girolle in France, “finferli” in Italy, and “lisichki” in Russia. The taxonomy was fixed in 1821 by the mycologist Elias Magnus Fries. In earlier days, the species was used to classify every yellow or golden chanterelle.

The main characteristic of the species is the yellow or orange color of the fruit body. This feature also distinguishes the golden chanterelle from other poisonous mushrooms. While some sub-species of Cantharellus cibarius can be found in North Americaⁱ, studies suggest that C. cibarius is an exclusively European species. Golden chanterelles usually grow in deciduous and coniferous forestsⁱⁱ of Europe, notably in Scandinavia and the Mediterranean basin.

Cantharellus cibarius grows singly or in groups in mossy or grassy areas. They are a mycorrhizal species since the mycelium of the fungus attaches itself to the roots of trees. In doing so, the surface area of the roots increases, and the latter can absorb more water and nutrients. Both the mushrooms and the trees thus share resources. The species are predominant near birch and oak trees. This symbiosis brings numerous benefits.

Moreover, the fruiting season for Cantharellus cibarius is from late summer to late fall in Europe. For other regions, the prime season is also during summer and autumn. As it is edible, golden chanterelle hunting is popular among people. The mushroom is used in the preparation of many culinary dishes. Drying and freezing the fruit bodies can help preserve the mushrooms.

Cantharellus cibarius species can easily be distinguished from other mushrooms because of their unique shape and size and bright yellow color. It can, however, be mistaken for other common look-alikes, some of which are highly poisonous. More often than not, differences between species can only be spotted under the microscope. The features of the spores and spore-bearing cells differ even for species of the same family.

One common look-alike of Cantharellus cibarius is the jack-o’-lantern mushroom. Scientifically known as Omphalotus illudens, this North American species is very poisonous. The similarity with C.cibarius lies in the bright yellow caps and pleasant smell common to both species. The only noticeable difference between Cantharellus Cibarius and the jack-o’-lantern is their feeding technique. C.cibarius is mycorrhizal whereas O. illudens feeds on dead woods. The Omphalotus illudens species is also bioluminescent in contrast with golden chanterelles. The toxin, illudin S, from O. illudens can cause severe stomach pain, vomiting, diarrhea, and headachesⁱⁱⁱ. Fortunately, the toxin is not lethal to humans.

Another species that is very similar to the golden chanterelle is Hydnum repandum, an edible mushroom. This species, colloquially known as the wood hedgehog or ‘sweet tooth’, has dry and yellow caps covered with spines on the underside. This mushroom can also be found in the same habitat as Cantharellus cibarius, which is in deciduous and coniferous woods. The hedgehog specimen resembles the golden chanterelle when it is mature.

In addition, there is also a species from the same family that vary very closely in appearance with C.cibarius. Cantharellus lateritius, also known as the smooth chanterelle, is an edible mushroom commonly found in North America, Africa, and Asia. This particular species also has bright yellow caps and a fruity smell. They both also produce fruit bodies during the summerⁱⱽ. For this reason, it is often confused with Cantharellus cibarius. Since both mushrooms share the same genus and family, the probability of mistaking one for the other is high. However, there is no real consequence in not differentiating the two; they are both edible and are not toxic.

One of the very first benefits of the Cantharellus cibarius species is the important role it plays in the ecosystem. The symbiotic connection with tree roots enhances the plant’s ability to draw up resources, such as water from the soil. As a consequence, there is accelerated growth in tree saplings. For this reason, mushrooms of this species hold immense potential for reforestation and forestry practices. The natural process feeding process of the fungus can also help in agriculture to increase crop yields while reducing costs.

More importantly, studies have shown that Cantharellus cibarius can help fight angiogenesisⱽ. Angiogenesis refers to the formation of new blood vessels near the surface of the skin. This increases the risk of inflammation of the skin. However, with the discovery of bioactive compounds in the fungus that can help prevent this condition; there is hope for a cure. Petroleum ether and ethanol extract from C.cibarius are potent anti-angiogenic agents. This discovery paves the way for more research about the benefits of Cantharellus cibarius.

Other natural compounds found in the mushroom are powerful antioxidants that can treat metabolic disorders, among other diseases. These biologically active compounds also have antitumor and antiviral properties. More so, integrating the mushroom into your regular diet can be beneficial as the mushroom has hypocholesterolemic and hypoglycaemic effectsⱽⁱ. That is, they can help you reduce your blood sugar and cholesterol levels healthily. Cantharellus cibarius is an anti-inflammatory and a potential immune system booster. Eating the mushroom can provide you with essential minerals and substances such as phosphorus and magnesium.

Extracts from Cantharellus cibarius have shown preliminary promise in the treatment of certain types of cancer, notably glioblastoma or brain cancerⱽⁱⁱ. Research has shown that ethanol extracts from the mushroom are more efficient at inhibiting cancer cell proliferation than other types of medication. This demonstrates the extent of the potential of mushroom species in the production of pharmaceutical drugs to treat cancer.

This mushroom species has no medicinal uses. Hence, there is no dosage as to how much one can consume them in one go.

Cantharellus cibarius is an edible mushroom that is very popular across the world. It contains no toxins and is thought to be fit for consumption by everyone. Consuming this mushroom is very unlikely to bring any side effects nor does it interfere with medications. However, if one develops any allergic reaction after ingesting the mushroom, it is best to consult a doctor.