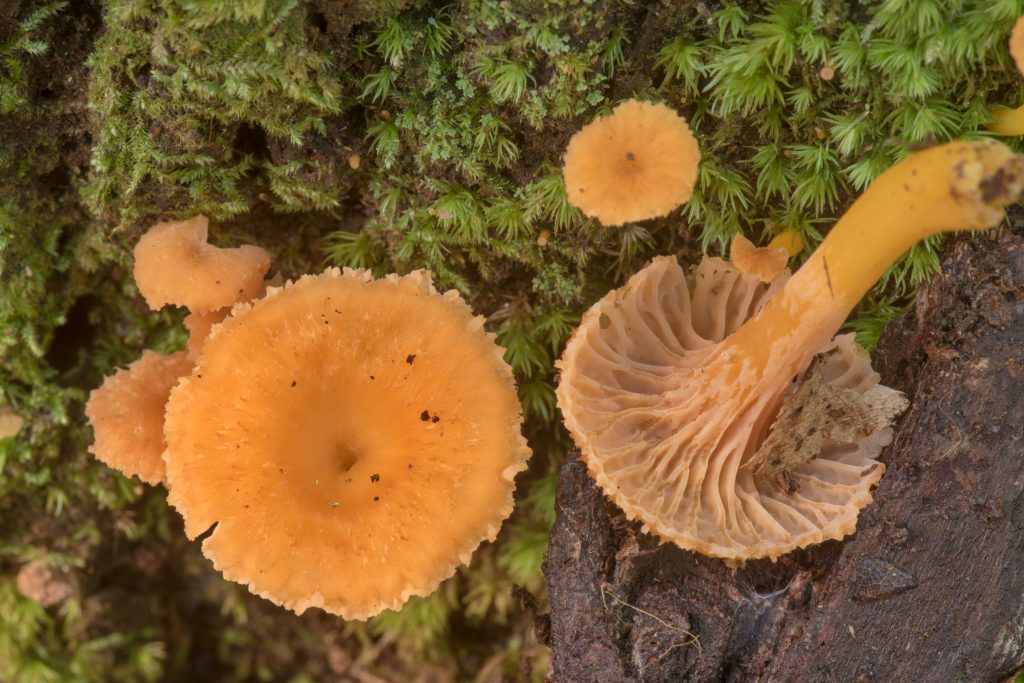 Craterellus ignicolor, also known as the Yellow Foot or Flame Chanterelle, is a species of fungi in the Cantharellaceae family. It is small in size and has under-developed false gills. The appearance of Craterellus ignicolor places it halfway between a chanterelle and a black trumpet due to its funnel-like shape. More so, this mushroom was discovered a little more than a hundred years ago. The taxonomy of the species changed over time. The species was previously in the Cantharellus genus but recent DNA studies carried out in the 2000sⁱ placed them in the Craterellus group.

Craterellus ignicolor is a mycorrhizal species, that is, it attaches itself to trees and helps the latter absorb water and nutrients. In return, the plant nourishes the mushroom as well. Craterellus ignicolor is usually in symbiosis with plants such as birches, beech, and oaks. They also occur in clusters and serve as an indication that black trumpet mushrooms are nearby. Moreover, the species is common in eastern North America in woody and damp areas. The prime season for reproduction and the sprouting of mushroom caps is from summer to fall. The mushroom is more abundant from August to November.

This species can be recognized by its bright yellow to orange color and shape. The funnel or vase-like shape of the cap distinguishes the mushroom from other fungi. The veiny stem beneath the cap also adds contrast to other mushroom types. All parts of the mushroom, including the stem, can be cooked and consumed. Craterellus ignicolor has no distinctive taste or odor. It can sometimes have a pleasant fruity smell.

Moreover, another look-alike is Cantharellus minor, a fungus native to eastern North America. It is also edible and fruits during the summer and fallⁱⁱⁱ. Although it is smaller in size compared to Craterellus ignicolor and has no central perforation, it is of the same color and texture. The feeding process of Cantharellus minor is also mycorrhizal, with the only difference being their habitat. C. minor prefers evergreen forests instead of the swampy habitat of C. ignicolor.

Another look-alike of C. ignicolor is Craterellus lutescens or Cantharellus xanthopus or Cantharellus aurora. It is also colloquially known as Yellow Foot. This species has brightly colored caps and appears similar to C. tubaeformis, which is also a look-alike of C. ignicolor. As a matter of fact, the three mushrooms are so similar that only an expert eye would be able to distinguish them. What’s more, Craterellus lutescens is also edible with no distinctive tasteⁱⱽ.

Craterellus ignicolor is far from being poisonous. For this reason, it is mostly used in culinary dishes as a delicacy. This mushroom can be sautéed to enhance its subtle taste. Powdered C.ignicolor can also be used to add flavor to certain sauces. This is the extent of the culinary uses of this mushroom. For the first time trying this mushroom, it is best to pan-fry it and add salt. This will enhance the taste of the mushroom.

Like any other mycorrhizal mushroom, Craterellus ignicolor contributes to sustained forestry practices. Their symbiotic nature helps the trees to better absorb water and nutrients. In doing so, the trees can make better use of available resources to grow. This natural process holds great potential for reforestation and sustained agriculture. This way, crop yield can increase with minimal resources being poured into agriculture.

Craterellus ignicolor, like most chanterelles, is rich in polysaccharides such as chitin, which is an essential component of healthy cells. Moreover, edible mushrooms such as Craterellus ignicolor might be used as a natural dietary supplement to enhance antioxidant defenses. This would help reduce oxidative stress in the body and help correct an imbalanced metabolismⱽ. The natural compounds such as polyphenols, vitamins, and carotenoids found in these mushrooms can boost metabolism and the immune system. Consequently, various diseases which are linked to oxidative stress accumulation and a weakened immune system can be averted.

Furthermore, this species of mushroom can be used as a natural dye. Dyeing textiles or paper using crushed Craterellus ignicolor gives a pale yellow color to the dyed items. Oftentimes, to facilitate the process, ammonia is used as a mordant to fix the dye on the material.

Craterellus ignicolor has no medicinal value despite its many other benefits. Hence, there is no exact dosage recommended. As with all mushrooms, it is best to try a little at first.

Craterellus ignicolor is considered as inoffensive and non-poisonous. This mushroom has zero toxicity and no side effects. Consuming C.ignicolor also does not interfere with pharmaceutical drugs. It is thought to be fit for consumption by everyone. However, if there is any allergic reaction to the mushroom, the advice of a doctor should be sought immediately.