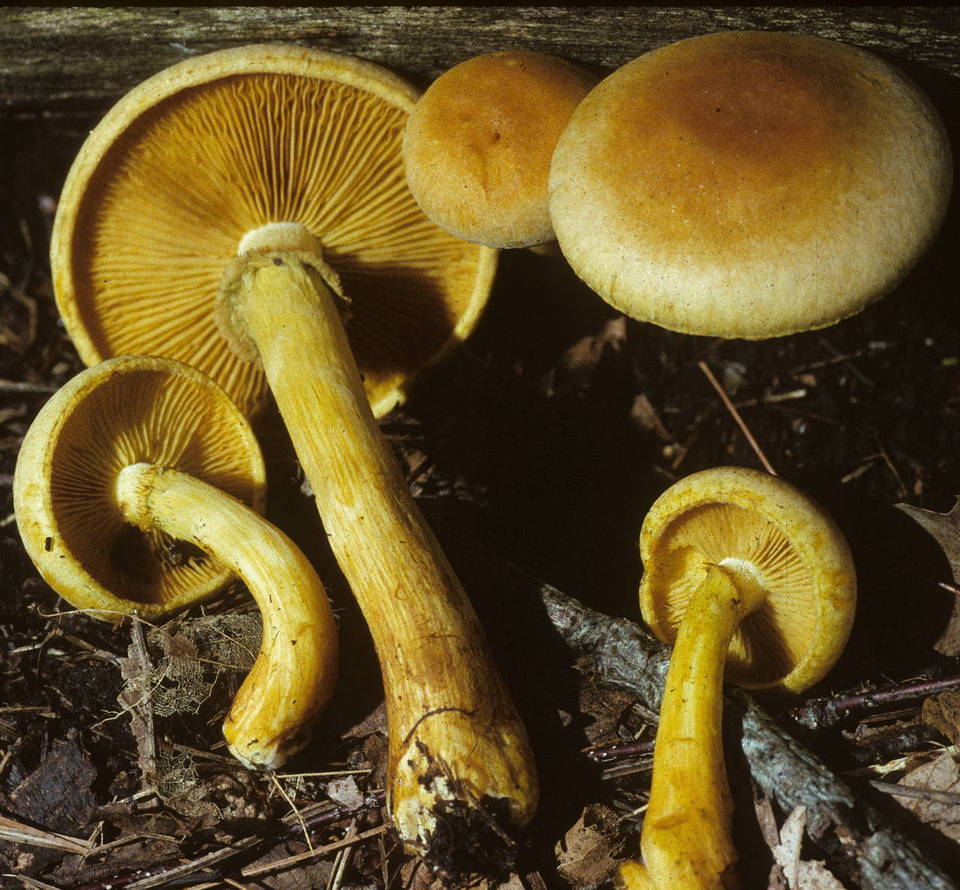 The yellow gymnopilus, Gymnopilus luteus, is one of several species similar to Gymnopilus junonius, which is often referred to as laughing gym for the simple reason that eating it tends to make people laugh. Most of the mushrooms in this group, including G. luteus, are psychoactive, causing visual disturbances, a strong body high, and other effects, including laughter. They’re also illegal to eat, or even possess, in many jurisdictions. While not as popular as Psilocybe cubensis and its relatives, G. luteus is used recreationally and has its fans, despite the law.

Use of this mushroom is not necessarily safe, for a whole host of reasons, including the fact that we still don’t know a lot about its biochemistry. See note under Toxicity. But if the mushroom is properly identified and used carefully, the user often appreciates the experience.

Whether G. luteus has any other potential uses is not clear. It may or many not. Either way, it is a pretty little mushroom, a splash of pale color on the brown of decaying wood. And, ultimately, it is a living organism and one of the agents by which dead wood returns to soil so it can become part of life again.

Cap: Small to medium-sized, yellow to orangish, may be slightly hairy or scaly. The interior flesh is light yellow
Gills: Yellow, turning rusty with age
Stem: Thin, yellow to orangish, matching the cap but staining rust-colored with age or when bruised. Has fine hairs. Usually (not always) with a ring or a visible ring zone near the top
Smell: Pleasant or not distinctive
Taste: Bitter
Spores: Elliptical, warty
Spore color: Orange-brown to rusty brown
Edibility: Not edible
Habitat: Eats dead hardwood. May or may not also eat dead conifer wood. Fruits singly or in groups.

This fungus is one of a group of very similar species, but differs from the others in having a thinner stem and a yellower color, as well as in growing only in eastern North America[i].

G. luteus is, as mentioned, one of a group of several very closely-related species that are very difficult (but not impossible) to differentiate[ii]. Many of the others are used in similar ways, though they are not interchangeable.

There are also some less-close look-alikes, some of which provide severe consequences for mistakes[iii]. Many are in the genera, Armillaria and Omphalotus, which share the same habitat and food preferences as G. luteus, as well as looking similar. Both have white or whitish spores, in contrast to Gymnopilus’ orange to rusty ones. Some species of Omphalotus, notably, O. olearius, are seriously toxic. Galerina autumnalis is usually smaller and less bright in color, but not always, and its spores are rust-brown—and ingesting it can kill a person.

The existence of dangerous look-alikes, together with the reportedly terrible taste, seems like it would be enough to discourage recreational use; it isn’t.

G.luteus contains psilocybin[iv], a hallucinogenic substance suspected of also having medicinal value, but normally derived from Psilocybe cubensis or its relatives. While G. luteus is used recreationally, it’s not widely used, and it’s not generally used as medicine. It’s possible that this species contains other substances that might contra-indicate its use as medicine—anecdotally, its trips have a distinctly different feel from those from Psilocybe cubensis, suggesting that it is biochemically different[v].

As to what the species could be good for aside from recreational mind-alteration, the fact that possession or use of psilocybin is illegal in most jurisdictions has slowed scientific research on its possible uses, so most studies so far have been preliminary. It’s not clear what the substance is really good for, if anything. Anecdotal user reports themselves are not proof, given how easily humans can be fooled by the placebo effect and other forms of error and bias. That being said, users report that psilocybin seems to help with a wide range of conditions, including depression, anxiety, and headaches.

G.luteus is said to be a less potent hallucinogen than Psilocybe cubensis, but people who eat the mushroom sometimes report that it is, if anything, more potent[vi]. As always with psilocybin, not only does potency vary from mushroom to mushroom, but the sensitivity of users varies. It’s best to err on the side of too little rather than too much when using a new-to-you psilocybin-containing mushroom species.

Popular methods of consumption for Gymnopilus luteus include Lemon Tek and Shroom Tea.

G.luteus is considered toxic because it contains psilocybin[vii]. Although many people ingest psilocybin deliberately because they like many of its effects, for a person to trip unexpectedly would indeed be a real problem. And while psilocybin is considered a relatively safe way to temporarily alter the mind, it can have unpleasant, even dangerous side-effects. The most common of these are nausea and excessive yawning, though anxiety (sometimes extreme) is not unusual, and serious problems are not unheard-of. Persons wishing to trip are well-advised to follow certain safety procedures, such as trying only low doses in the beginning and always having a sober friend on hand in case the trip goes bad—or in case some practical matter needs the attention of someone who isn’t hallucinating.

It’s also worth noting that using G. luteus could have negative consequences of its own that simply aren’t well known yet. It could be biochemically quite different from the more familiar Psilocybes. There are species in the same genus that may contain amatoxins, extremely dangerous substances better known from the genus Amanita[viii]. While North American Gymnopilus species have never been found to contain amatoxin, the fact that a related Australian species might suggests the biochemical complexity of the group.

There are two other important sources of danger as well.

First, the risk of misidentification is significant, and as noted earlier, some of this species’ look-alikes are seriously toxic[ix]. Although there are clearly-defined differences between this species and its toxic look-alikes, inexperienced or over-confident foragers could easily miss the differences. No one not deeply experienced in mushroom identification should harvest G. luteus for consumption.

Second, in many jurisdictions, possession or use of psilocybin in any form, including the form of a mushroom, could land a person in prison.