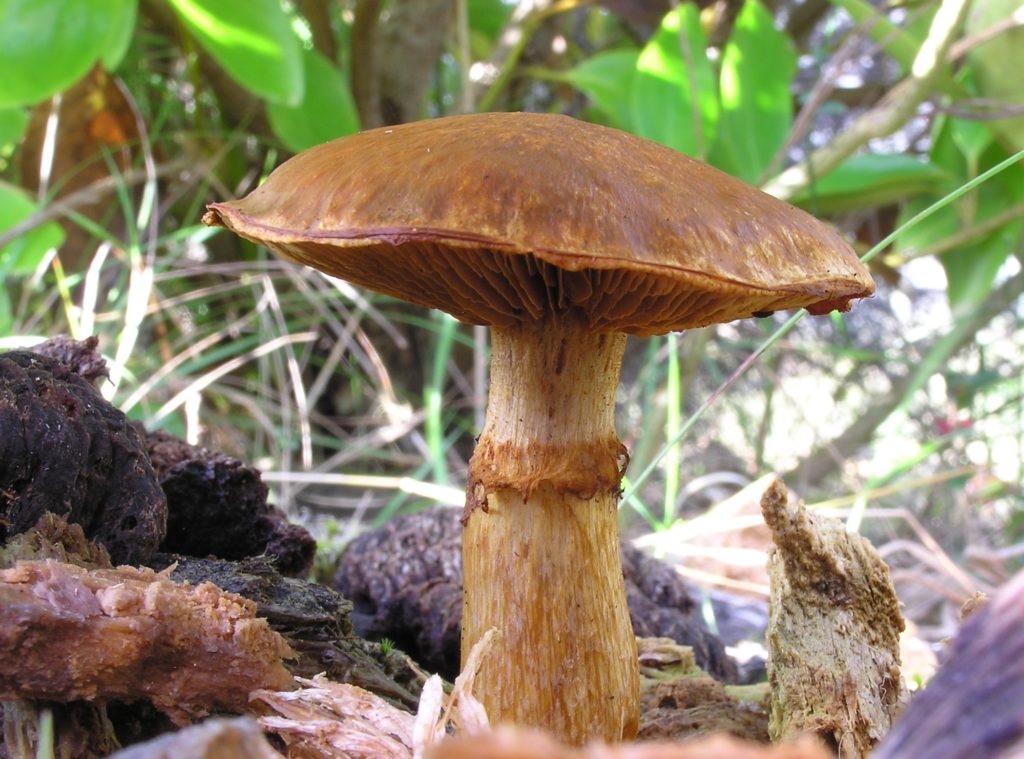 The epithet Junonius is in reference to Juno, a Roman Goddess. Juno was the wife and the sister of Jupiter and the daughter of Saturn. She was considered beautiful and a warrior-like woman matched by her statuesque presence.

The psychoactive compound that induces hallucinations in these types of mushrooms is psilocybin; however, the levels of any psychoactive compounds in Gymnopilus junonius are variable and even maybe regionally dependent. It is important to note that Gymnopilus junonius is considered very poisonous; this may be due to the presence of neurotoxins, gymnopilins, in the fruiting body of the mushroom.

Cap: Large from 4 to 20cm in diameter. Specimens of around 30cm have been reported. Convex to nearly plane with age. Cap color is not the same across all; sometimes gold; may be a deep orange or red-brown in older specimens. Surface is dry with tiny brown scales. Yellow flesh, solid.
Gills: Crowded and attached gills. Narrow to quite broad. Pale yellow or angish-brown.
Stem: Thick and strong; club-like shape. Up to 27cm tall; 1 to 4 cm thick. Same color as the cap. Thick and yellow flesh. Ringed stem. Partial veil may be present. Covered in tiny fibers.
Smell: Anise.
Taste: If chew the cap and spit it out, it is bitter.
Spores: Oval or elliptical; wrinkled.
Spore color: Rusty brown.
Edibility: Inedible. Poisonous.
Habitat: Wood rotting (saprobic) so important for the decomposition of wood, returning the nutrients back to the soil. Grows at the base of dead broad-leaved trees; on ground or buried wood; sometimes conifers. Solitary of found in small yet dense groups in moist areas; frequently lowlands by rivers. Spring to early Winter depending on location; in Southern Europe found in January still fruiting. Quite commons, found in Europe, Australia, New Zealand, Asia, Africa, and North and South America.

Despite a growing body of evidence that some psychoactive compounds may prove beneficial as therapeutics in medicine, there are no reported benefits for the consumption of Gymnopilus junonius.

Gymnopilus junonius is poisonous. There are reports that it may be mildly hallucinogenic, but the volume of mushroom required to reach sufficient amounts to produce effects are more likely to make you sick before the effect is reached. Gymnopilus junonius is very bitter in taste and, therefore, is not considered pleasant to eat.

Gymnopilus junonius is widely distributed in Japan and well known for being a hallucinogenic mushroom. The neurotoxin gymnopilin has been isolated from the mushroom in a number of studies originating in Japan to identify its mechanism of action. Whilst gymnopilin is thought to underlie its toxicity, ‘the how’ is still under investigation. Toxicology reports indicate that because this mushroom is poisonous, immediate medical help should be sought if accidentally eaten. The indications are that most patients will require short periods of medical observations, and symptoms may be treated until the acute effects are resolved again. More severe reactions include repeated seizures, restriction of blood to the heart that can lead to a heart attack, hypothermia, and damage to the muscles due to breakdown of the tissue.

Due to the toxicity of Gymnopilus junonius, it is essential to correctly identify the mushroom to avoid consuming inadvertently. Seek advice from a professional mycologist if in any doubt before eating.