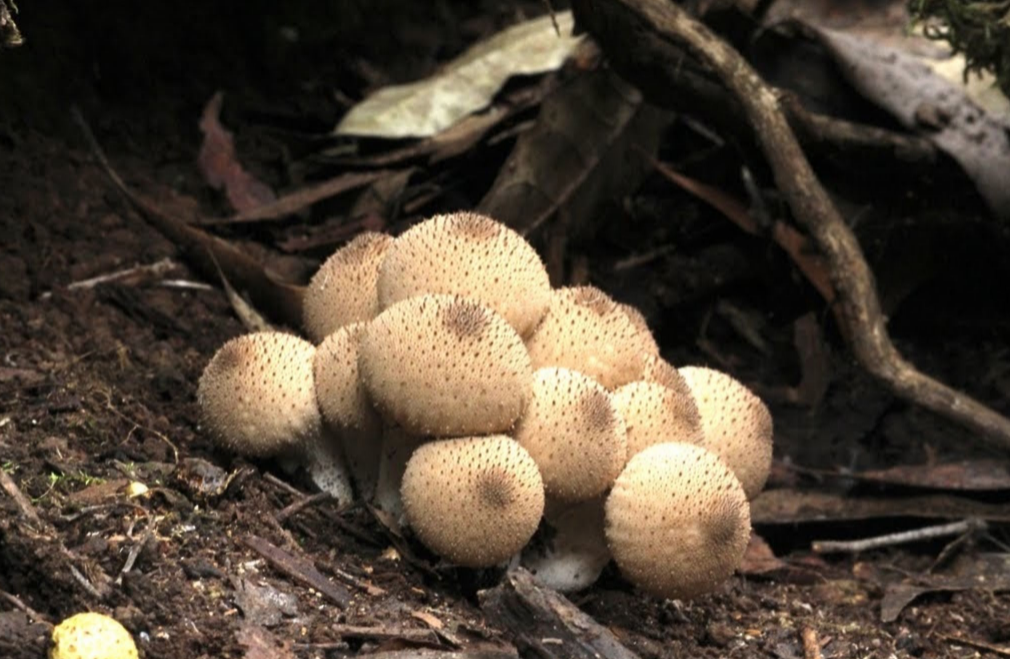 Apioperdon pyriforme is the same thing as Lycoperdon pyriforme. The name officially changed only a few years ago, and there are still a lot of publications and websites that use the old name—and it’s kind of a fun name, given that “Lycoperdon” literally means “wolf-fart,” possibly reference to the scent of the mushroom[i]. The name-change was in response to genetic studies that showed this species to be rather different than other Lycoperdon puffballs, but mycologists and mycophiles alike already suspected as much[ii]; the common name, stump puffball, reflects the fact that this fungus likes to eat wood and often fruits from stumps, something the true Lycoperdons don’t do.

With a name like “wolf-fart,” one wouldn’t expect A. pyriforme to be a culinary delicacy, and it isn’t—but it is edible, and reportedly tastes better than the name implies. The species grows across much of the world.

Fruiting body: Small to medium-sized, ball-shaped when young, usually developing a narrowed base (like an upside-down pear) with age. White, root-like rhizomorphs extend from the base. The surface is initially white with tiny spines, but becomes brownish or yellowish and, usually, spineless. The interior flesh is initially white with a marshmallow-like texture but becomes yellow, then olive, and increasingly grainy. Fully-mature fruiting bodies are entirely filled with brownish spore dust. At maturity, a small opening in the top develops through which the spores can exit.
Smell: Described as either “gassy” or “delicious,” depending on who is doing the explaining.
Taste: Nothing useful for identification
Spores: Rounded, smooth
Spore color: Brownish
Edibility: Edible, but not choice
Habitat: Eats the dead wood of both hardwood and conifers. Usually, but not always, fruits in large, dense clusters.

The ability to grow on stumps is very distinctive of this species[iii], but it sometimes fruits from the ground—in such cases, the fungus is still feeding on wood, but the wood is simply buried. The spores only come out when the mature fruiting body is jostled by something, such as rain drops or animals. The name, pyriforme, means pear-shaped. A. pyriforme is not the only pear-shaped puffball, nor is is always pear-shaped, but it’s a common and distinctive feature of the species. Old, very damaged specimens are sometimes still visible the spring after they first came up.

There are many species of small puffball that all look very similar, though there are subtle differences an expert can spot without much trouble. The thing that sets A. pyriforme apart for non-experts is that it can fruit from wood. But since the other puffballs are also edible, telling them apart is perhaps not critical (it’s always best to identify to species for safety, though), except for the scholarly.

The important thing is to be sure the mushroom is a puffball and not, for example, an earthball or an Amanita. Some Amanitas are deadly, and Earthballs can make an eater very ill.

Earthballs are, like puffballs, round structures that produce spores internally. When very young, they, too, may have pale interiors, but they darken much earlier. They are also much firmer, more like a rubber ball, whereas puffballs are like marshmallows.

Amanitas, like the stinkhorns, look nothing like puffballs when mature, but the fruiting bodies are initially encased in a round, egg-like shell of tissue, and could be mistaken for puffballs. Slicing the “egg” in half vertically reveals the structure of the baby mushroom inside. Stinkhorn eggs and Amanita eggs do look distinct from each other when sliced open. Stinkhorn eggs are edible, though Americans seldom like the taste.

Although A. pyriforme is not considered choice, it is edible, even enjoyable, and since it often fruits in very large groups, a single flush can provide a lot of food. Reportedly, it is especially good in omelets. The trick is to harvest the mushrooms when they are young and to peel away the tough outer skin[iv]. Once the interior starts to color, the taste and texture quickly become unpalatable.

Nutritional information is not available for A. pyriforme, but most edible mushrooms are healthy to eat. There are no reported medicinal uses.

There is no dosage, since A. pyriforme is not used medicinally.

There is at least one documented instance of A. pyriforme spores germinating inside human lungs and causing illness, but the humans in question were under the mistaken impression that deliberately inhaling the spores in quantity would make them hallucinate (it didn’t;  this is not a “magic” species)[v]. Nobody could accidentally inhale enough spores to pose a serious risk.  A. pyriforme just isn’t very good attacking humans. Even those would-be recreational users who deliberately inhaled a lot pf spores were easily cured.