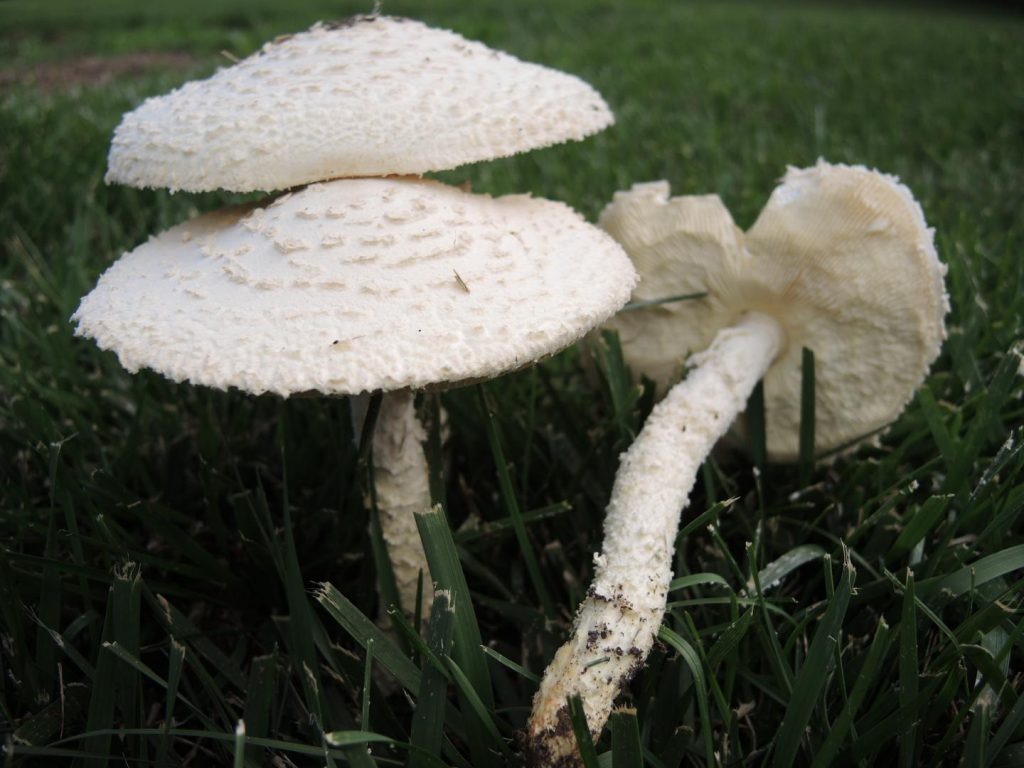 Amanita thiersii[i]—or Saproamanita thiersii  has the English common name Thiers’ lepidella, though that is is a bit of a mouthful, too—is a subtly pretty mushroom that hardly anybody knows much about. It’s probably not poisonous, but nobody eats them. If it has medicinal value, nobody has discovered it. The species was initially discovered in Texas (by a man named Thiers), but is now being found in more and places. The species appears to actually be spreading, rather than simply being found in places it had always been un-noticed. It’s not clear why.

A. thiersii has become a common mushroom of grassy areas across large areas of North America. Anyone in its range who pays attention to fungi has likely seen it. It’s a good mushroom to know.

Cap: Medium-sized to large, white. Initially egg-shaped, but then opening like an umbrella until it is nearly flat-topped. The surface is powdery or shaggy (unless washed off by rain). The interior flesh is soft and white and does not change color when sliced.
Gills: Free from the stem or almost free, white, becoming yellowish in older specimens.
Stem: Long, relatively thin but still sturdy, with a slightly enlarged bottom. There is a skirt-like ring of tissue partway up the stem. The surface below the ring is shaggy and powdery. White.
Smell: Can be both unpleasant and cheese-like.
Taste: Bitter or metallic and oily.
Spores: Smooth, almost round.
Spore color: White.
Edibility: Unknown.
Habitat: Eats dead grass roots. Fruits singly or in groups, sometimes forming fairy rings.

It’s easier to discuss Amanita anatomy once one knows the basics of their development. The fruiting body is initially enclosed in a shell of tissue, rather like an egg. This shell is called the universal veil. As the stem and cap expand, the universal veil tears, leaving remnants around the base of the stem (the volva) and on the top of the cap. There is also a veil of tissue stretched from the stem across the gills to the rim of the cap. This veil also tears as the mushroom grows, leaving the skirt of tissue around the stem and sometimes shaggy fragments on the cap ring.

In the case of A. thiersii, the volva is fragmentary. The veil remnants on the cap are shaggy, rather than warty. These remnants are a very distinctive feature, but they easily wash off in the rain.

Fairy-ring formation, while lovely and fascinating, is not an aid to identification. Lots of fungi (plus several plants) grow in rings.

Several species look very much like A. thiersii, notably parasol (Macrolepiota procera), Shaggy Parasol (Chlorophyllum sp.), Reddening Lepiota (Leucoagaricus americanus), and false parasol (Chlorophyllum molybdites)[iii]. Of these, C. molybdites has green spores. All the others have white spores, like A. thiersii. L. americanus, as the name implies, bruises red. The others do not. M. procera is hard to differentiate from A, thiersii, but is scaly rather than shaggy, and the scales do not easily come off.  The various edible Chlorophyllums, the shaggy parasols, also have scales that do not easily come off.

Of this group of similar mushrooms, only M. procera and L. americanus are definitely edible. As noted, the true status of A. thiersii is not known, while the various edible Chlorophyllums have a confusing habit of occasionally poisoning people, and C. molybdites will almost but not quite reliably make eaters very ill.

Many writers recommend against eating any member of the group, because of the possibility of misidentification.

Because A. thiersii is not currently used medicinally, there is no recommended dose.

Does that mean A. thiersii should be eaten? No, not necessarily. It could have some as-yet unknown toxin that can’t be tested for. Plus, there is the possibility of a mix-up with the potentially dangerous (and certainly unpleasant) C. molybdites—or even with one of the deadly Amanitas, though the resemblance there is less strong. Possibly, some adventurous experts ought to take a nibble and report back to the rest of us, although no one only learning about the species today from an article like this one should take the risk!