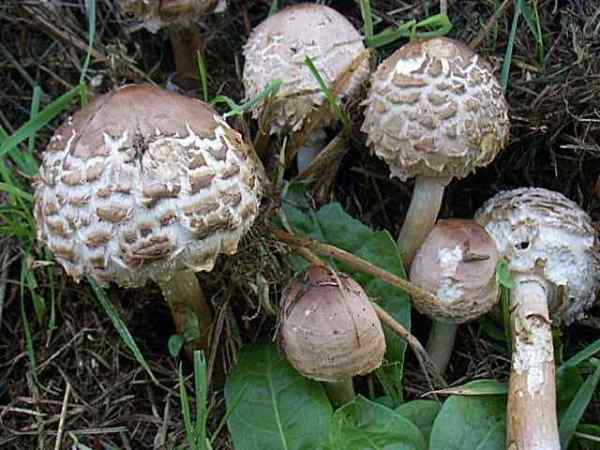 Chlorophyllum rhacodes, commonly known as the Shaggy Parasol (a common name it shares with two other mushrooms Chlorophyllum olivieri & Chlorophyllum brunneum), is a large mushroom characterized by a scaly, shaggy, pinkish to cinnamon brown cap with free gills, a ringed stalk, a white spore print, and flesh that turns a saffron color when cut.[i]

The taxonomy and etymology of this species are quite interesting.

This species was was first described in 1835 by the Italian mycologist Carlo Vittadini under the name Agaricus rachodes. If one has been reading carefully, they should have notices the spelling difference between “rhacodes” and “rachodes”. This difference is thought to have arisen from a mistake by Vittadini himself, who mis-transcribed the greek work ρακωδης (rhakos), meaning ragged, tattered, or shaggy, into “rachodes” rather than “rhacodes”. As such, readers may come across both epitaphs used in mycological literature.

Based on this assorted taxonomic and etymological history, readers may meet Chlorophyllum rhacodes under several synonyms in mycological text:

Cap: The cap of this species measures 5 to 15 centimeters in diameter. It is convex or nearly round in shape, becoming broadly convex or nearly flat with age. The cap is smooth and orangish-brown when the mushroom is young, at the “button stage”. However, with age, the surface will break up into large, coarse, downcurved, cinnamon-brown fibrous scales on an underlying fibrillose, white background.

Gills: The gills of Chlorophyllum rhacodes are free from the stalk, close or crowded. The gills are white when young, but turn pale brownish with darker brownish edges with age.

Stalk: The stalk measures 10 to 15 centimeters in height and 1 to 1.5 centimeters in diameter. It is stout, club-shaped, and has a swollen basal bulb. The surface of the stalk is smooth. It is divided into upper and lower segments by a whitish, double-edged, moveable, band-like ring which is a remnant of the partial veil. Above the ring, the stalk is white, while below it, the stalk is brown in color.

Spores: The spores measure 8-12 by 5-8 µm in size. They are ellipsoid or pyriform (pear-shaped), smooth, colorless, thick-walled, with a pore at its tip. The spores are dextrinoid, meaning they turn a reddish-brown color when treated with Melzer’s reagent.

Edibility:  The edibility of this species is questionable. Most mycological sources agree that this species is edible, however, only when thoroughly cooked. Furthermore, even when cooked, certain susceptible individuals still experience gastrointestinal upset.

Habitat: Chlorophyllum rhacodes is a saprobic species that can grow solitarily, scattered, gregariously, or more characteristically in “rings”. These rings start from a single point and expands outward as the underground mycelium expands peripherally searching for more nutrients. It can grow in a majority of environments, but it is most commonly seen in woodlands, fields, gardens, and along hedgerows. Furthermore, Chlorophyllum rhacodes appear to have an affinity for conifers and grow in their vicinity.

Range:  Chlorophyllum rhacodes grows throughout the world. It is widely distributed throughout North America but is most common from the Rocky Mountains eastward in midwestern, northwestern, and southeastern states.

Fruiting Season: Chlorophyllum rhacodes fruits from late summer to autumn, most commonly from August to October.

This species has several look-alikes, mostly other parasol mushrooms.

The most attention should be paid to differentiating Chlorophyllum rhacodes from Chlorophyllum molybdites. Both species are of similar shape and size, have white gills when young, a ring on the stalk, distinct scales on the cap, and no volva. However,  C. molybdites can be distinguished by its pale green to lime-green spore print and the green color of the gills in mature fruiting bodies.

Chlorophyllum molybdites can also be confused for the edible Macrolepiota procera. However, the latter species does not change color when bruised or cut.

Chlorophyllum brunneum and C. rhacodes can be differentiated from each other by the latter species having a swollen base without a distinct rim.

Macrolepiota procera can be differentiated from C. rhacodes by a brown and white serpentine pattern that appears on its stalk. Furthermore, specimens of M. procera are often larger than C. Rhacodes.

Mushrooms from the poisonous genus of Lepiota may also be mixed up with Chlorophyllum rhacodes. However, Lepiotas are much smaller and as such the mix-up can be avoided if those looking for C. rhacodes only pick specimens that have caps of at least 12 centimeters in diameter.