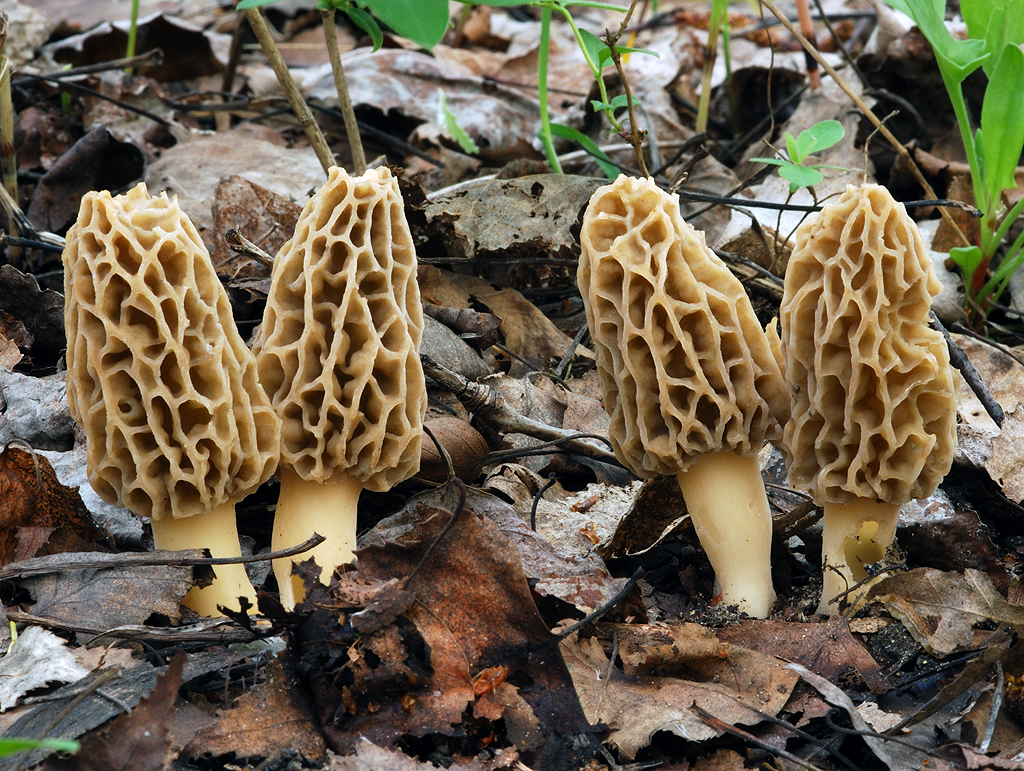 Morchella americana, commonly referred to as the “Blonde” or the “Yellow” morel, is the most widely distributed morel found in North America. M. Americana is characterized by its medium to large size, spongy pine cone-shaped or egg-shaped head, and a series of mostly vertically oriented dark pits and pale ridges.[i]

The taxonomy of morels is very dynamic and complicated. In general, morels are very difficult to taxonomize for several reasons. Morels tend to be highly polymorphic in their macromorphological (size, shape, color, etc.) features and oftentimes lack distinct distinguishing micromorphological features. Furthermore, contrasting morel taxonomies by American and European mycologists which describe a variable number of unique species and use different binomial names for species that are in reality synonymous has made accurate taxonomic classification very difficult. In the last decade morel taxonomy has undergone considerable changes using molecular phylogenetic analyses.[ii]

Morchella americana was first introduced as a unique species by Clowez and Matherly in 2012 and was affirmed by the unified taxonomy of true morels based on molecular phylogenetic analyses by Richard and colleagues in 2014. According to this new unified taxonomy, Morchella americana belongs to the Morchella/Esculenta Clade of yellow morels, which itself contains  approximately 36 phylogenetically distinct species. According to this new classification, the binomial name Morchella americana is meant to unify several names which are synonymous and have been used to describe this species in other taxonomic classifications. Furthermore, molecular phylogenetic analyses of various morels also resulted in the realization that species that were once thought to be distinct based on morphology were in reality the same. As a result, Morchella americana has “absorbed” species that were once thought to be distinct. [iii]

Therefore, all of the following “once distinct species” represent Morchella americana:

Cap/Head:  The head of Morchella americana is hollow, egg-shaped with a convex, bluntly conical, or sometimes nearly round apex. The appearance of the head resembles a pine cone with pits and ridges, the pits are irregularly shaped with broadly angled pits and either randomly or vertically arranged and oriented.

The cap is attached directly to the stalk without a notable overhang or rim.

As a side note, the variable coloration of the caps, yellow and gray, is what gave rise to the belief that there were two separate groups of morels. However, modern mycological research has shown that the gray and yellow morels represent the same species at different stages of maturation and growth environments.

Stem: The stem of Morchella americana measures 2 to 12 centimeters tall and 1.5 to 10 centimeters wide. The dimensions of the stem can be much larger if the growing environment of the specimen is warm and wet, however, the stem it is usually shorter than the cap. The stem is finely granular in texture and swollen at the base. Inside, the stem is hollow but sometimes can be chambered near the base. The stem is a pale yellow to tan in color.

Spores: Spores measure 18-22 by 11-15µm. They are smooth, elliptical, without oil droplets, and with homogeneous content.

Habitat: The exact ecology of this species is unclear, but Morchella americana is thought to possibly be saprotrophic, mycorrhizal, and endophytic depending on the stage of its life cycle. M. americana is found growing alone, scattered, or gregariously in an enormous range of habitats. Most often this species is found growing in damp pockets and non-acidic soil under hardwood trees. They tend to have a special association with white and green ash trees, dead or dying elm trees, but also with aspens, sycamores, tulip trees, balsam poplars, and old apple orchard trees. From time to time, M. americana can be found under conifers, especially white pine.

Fruiting season: Fruiting season is in spring for this species, mostly from March to June. The exact fruiting period will depend on the geographic location.

Range: As the name suggests, Morchella americana is endemic to the North American continent and can be found almost everywhere. Evidence suggests that this species can also be found in continental Europe, however, it is believed that M. americana is a recent inhabitant of Europe, as most European specimens of this mushroom are from sites of visible human impact, especially hardwood(poplar) plantations. This species can be found throughout the continental US, but it is most common east of the Rocky Mountains, especially in the midwest and spans from Southern Ontario, to Texas, Arkansas, Alabama, Georgia, and South Carolina. As a matter of fact, the common yellow morel is the state mushroom of Minnesota.

As a side note, Europe also has a species of mushroom that is almost morphologically identical to Morchella americana. This species is Morchella esculenta. These two species are so alike that American yellow morels were formerly known as M. esculenta. However, this changed with the recent molecular phylogenetic studies which showed the American and European morels to be distinct species. As such, Morchella esculenta only refers to yellow morels endemic to Europe.

There is not much good news when it comes to differentiation among various morel species as they are highly variable in their appearance and almost impossible to tell apart unless one carries around a miniature DNA sequencer in their pocket.

Fortunately, almost all true morels are edible and the mix-up should not be associated with serious danger.

Mushroom hunters will most often have to differentiate between M. americana and at least six other species including  M. angusticeps, M. diminutiva, M. exuberans, M. prava, M. punctipes, M. septentrionalis, and M. cryptica.

For example, M. prava can be somewhat reliably differentiated from M. americana macromorphologically as M. Prava’s pits are black throughout its life, where as M. americana’s pits will never turn black, no matter the age. However, telling M. cryptica apart from M. americana is impossible without DNA sequences, and as such mycophiles hunting for morels in states like Illinois, Virginia, Pennsylvania, or around the Great Lakes region will have to live with never knowing whether the mushroom they picked up is one species or the other.

Lastly, another species of mushroom that resembles Morchella americana is the poisonous False Morel, Gyromitra esculenta. Fortunately, this mushroom can be differentiated visually by taking a look at its cap and stem. The cap surface of Gyromitra species is folded rather than pitted, the caps are not fused with the stems, and the stems are dense instead of hollow.

Morchella americana is completely safe to consume, however, some individuals may experience gastrointestinal upset. To avoid this, ensure that all morels are thoroughly cooked to destroy any gastro-irritants before consuming them.

The Black Morel,  Morchella angusticeps, which may sometimes be mixed up with M. americana, is known to cause gastrointestinal distress, especially when consumed along with alcohol.